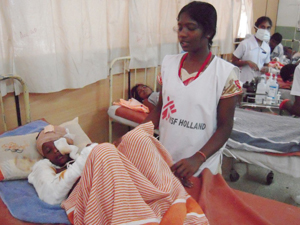 As the Sri Lankan government declares the end of the conflict, thousands of people are leaving the Vanni, the former conflict zone, and arriving in Vavuniya district in desperate need of medical care.

Traumatized and exhausted, with hundreds injured, a staggering 50,000 people have arrived since May 16 in Vavuniya, where Doctors Without Borders/Médecins Sans Frontières (MSF) is working at Vavuniya hospital. Many thousands more are still expected in the coming days.

“Despite increasing the number of staff, MSF teams are overwhelmed by the huge and sudden influx of people,” says Katrien Coppens, MSF operational manager in Amsterdam. Since Saturday, MSF teams have been working alongside Ministry of Health staff performing triage at the main crossing point, selecting the most seriously injured, treating and stabilizing them on site. On average, there are 10,000 people arriving at this checkpoint every day, and MSF is treating roughly 200 of the most seriously wounded and ill patients. About 30 percent are then transferred to Vavuniya hospital. The rest are sent to the camps, where there are Ministry of Health medical staff.

“The triage is extremely difficult. In order to prioritize the most critically ill and wounded, many patients in need of treatment simply cannot receive immediate care,” says Coppens. About 1,900 patients are currently at Vavuniya hospital, which has only a 450-bed capacity. Many of them are lying on mattresses on the floor and in the corridors, Coppens says. “We had seen a gradual decrease in the number of patients arriving at Vavuniya hospital in the past two weeks, but it was just the calm before a full blown storm of medical and humanitarian needs.”

MSF has been providing supplementary feeding for displaced people at the camps in Zone 4 of Manik Farm, where new arrivals are being sent. Between May 16 and 19, a total of 23,000 people arrived, and many more are expected to come.

MSF is setting up an additional emergency field hospital in Manik Farm with a bed capacity of 100 and is supporting the Ministry of Health Hospital in Pampaimadu.