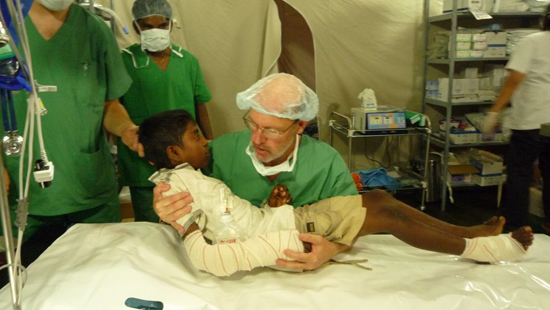 An MSF surgeon prepares to treat a young patient in an MSF hospital close to the displaced persons camps in Manik Farm, in the north of the country.

Working in conjunction with the Sri Lankan Ministry of Health, Doctors Without Borders/ Médecins Sans Frontières (MSF) medical teams in Vavuniya District in Sri Lanka’s northeast have performed more than 5,000 surgeries over the last five months, most to treat conflict-related injuries. Activities are currently focused on post-operative care, including minor surgery, dressings, and physical therapy, as well as hospitalizations for displaced persons.

"There are many pregnant women and many children who are developing complications from respiratory illnesses, malnutrition, and diarrhea."

Seven weeks after fighting ended between the Sri Lankan army and the Tamil Tiger rebels, fewer patients are arriving at the hospitals, but their numbers still exceed bed capacity. The total number of patients at the 450-bed hospital in Vavuniya has stabilized in recent weeks at approximately 1,200. MSF is working with Ministry of Health staff in the Vavuniya and Pompaimadu hospitals, as well as in an MSF hospital located across from the Manik Farm camps.

Surgery and post-operative care for the wounded still constituted most of June's activities, with nearly 1,200 surgeries performed on war-related injuries and thousands of wounds dressed. "Increasing numbers of displaced persons are now coming to the hospitals, too," says Hugues Robert, MSF head of mission for Sri Lanka. "The population in Vavuniya District nearly doubled over a few months, with more than 260,000 displaced persons arriving from the former conflict zone in the Vanni, area of northern Sri Lanka. This means that there are many pregnant women and many children who are developing complications from respiratory illnesses, malnutrition, and diarrhea. The Ministry of Health has expanded its capacity to treat these patients, but given the breadth of the needs, we think it's important for MSF to continue to provide support and expertise."

At the MSF hospital located across from the Manik Farm camps, staff has hospitalized 600 patients since its opening on May 22. Most are displaced persons, referred either by Ministry of Health staff working in the camps or by other hospitals that have run out of space. They arrive and leave in ambulances, accompanied by a member of the security forces.

"The primary causes of hospitalization are old wounds and respiratory and skin infections," says Marie-Noëlle Rodrigue, MSF's emergency operations manager. "We adapt based on the medical needs. For example, we are developing obstetric care. But because we don't provide medical care in the camps, we don't have a good sense of the health status of the population that has come out of the war zone."

Some displaced persons may require hospitalization for several days to several weeks. They include, for example, paralyzed and permanently disabled individuals who are treated at the Ministry of Health's Ayurvedic hospital in Pompaimadu. MSF's physical therapists help them regain some mobility so that they can move around with the crutches and wheelchairs provided by Handicap International.

Some of the wounded and ill are burn survivors, struggling to return to normal life. "I remember one woman whose face was ravaged – you couldn't tell her age,” a nurse recalls, “and she was with her eight-year-old daughter, the only one of her four children to survive. The child helped her in every aspect of her daily life. The woman would just disappear into herself for periods; it was the only way to escape the pain, in spite of the medication. She had to undergo several skin grafts after being wounded by multiple bomb explosions. I also remember a seven-year-old boy who no longer spoke and hadn't eaten practically anything for two months, since his father died. He was severely malnourished and did regain weight while he was hospitalized. But he never said a word right up until the time he left."

Ministry of Health hospital in Vavuniya: MSF has supported the surgical unit since February. Approximately 4,000 surgeries have been performed on war-related injuries. The volume of work remains high, with an average of 1,400 surgeries per month since April. The vast majority, 70 percent, involve war-related wounds. More than 3,000 dressings have been applied in a temporary tent, the accident unit and three other hospitalization departments where MSF received authorization to work. MSF also supports the nutrition center in the pediatrics department, with nine nutritional assistants. In addition, approximately 100 assistants help patients in various departments who cannot feed or wash themselves. They also distribute essential supplies, including sheets, clothing, and bags, to new patients who need such items.

Ministry of Health Ayurvedic hospital in Pompaimadu: More than 170 wounded patients receive care, from minor surgery to physical therapy, in this hospital, which has received support from MSF since May. A small operating room was installed for minor procedures. Most involve wound-cleaning under anesthesia so that patients do not suffer excessively. In June, 114 minor procedures, primarily wound cleaning, were performed. Two physical therapists and five assistants help patients work their muscles and move as much as possible. Approximately 150 patients have benefited from this physical therapy to date.

Manik Farm hospital: This 150-bed hospital is equipped with two operating rooms and an intensive care unit. The tents have been replaced gradually by semi-temporary structures in order to improve hospital conditions, and the number of beds may be increased further as needed. Of the 600 admissions since late May, approximately one-quarter were children under five years of age. The surgical team performed more than 300 procedures. More than one-third involved war injuries, primarily to extract shrapnel and bullet fragments. Outpatient services are also provided for new patients and for surgery patients who require post-operative treatment. 210 patients have received outpatient care since late May.

MSF has also been working at the Point Pedro hospital on the Jaffna peninsula since 2006, providing obstetric services, emergency care, and surgical care, and in the Chavakachcheri hospital since 2008, providing surgical consultations and prenatal care. MSF has provided prenatal care in the displaced persons' camps in Jaffa since June.