The Status of Refugees Today, Sixty Years After A Landmark Convention

As the 1951 Convention relating to the Status of Refugees turns 60, millions of refugees – confined in camps, or scraping an existence in rural areas and cities – are facing a critical humanitarian situation. Refugees’ health and lives are being put in danger as a result of restrictive government policies and serious shortfalls in assistance. Médecins Sans Frontières (MSF) is extremely concerned by the global trend to restrict the movements of refugees and asylum seekers and to deprive them of the protection they need and are entitled to. 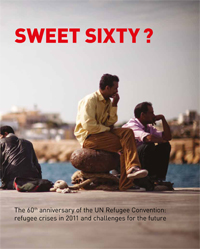 There are 15.1 million recognised refugees across the world. As party to the 1951 Convention and the 1967 Protocol, states have committed to protect refugees from harm. Host governments have significant responsibilities towards those who seek asylum in their countries, while refugees have specific rights, enshrined in international, regional and national legislation, including the right to a level of healthcare similar to that of the host population.1 However, all too often national governments circumvent, fail to uphold or simply ignore those rights. This has the dual effect of shutting the door to asylum seekers, and constraining assistance to refugees within host countries’ borders – with adverse consequences on their lives and on their health.

As an independent medical humanitarian organisation, MSF does not differentiate between its patients – be they refugees, asylum seekers, migrants, or simply men, women or children who are unable to get the healthcare they need. In addition to the more than 15 million recognised refugees, there are millions of other people, fleeing violence in their countries of origin or seeking a better life elsewhere, who are without legal protection and assistance. Nevertheless, on the anniversary of the Refugee Convention, there is a need to reflect on the collective struggle on the part of governments, mandated actors and civil society to provide basic welfare for refugees and asylum seekers.

This document is not an exhaustive account of the contemporary challenges faced by refugees and asylum seekers; instead it is a firsthand perspective drawn from MSF projects in 2011. It aims to illustrate – through five examples in southern Europe, South Africa, Liberia, Tunisia and Kenya –the restrictive policies of governments towards refugees and asylum seekers, and the shortfalls in assistance provided to them.

Download the full report to the read the other stories.