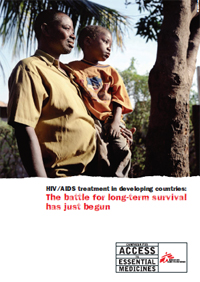 In one of the longest running public sector AIDS treatment programs in Africa, a partnership between MSF and the Department of Health in Khayelitsha, South Africa, 16 percent of patients experienced treatment failure on their first-line regimen within five years. A quarter of those patients who were switched to a second-line regimen failed on this alternative treatment line within two years. With no third-line regimen available in South Africa—as is the case in many other developing countries—these patients are now at risk of dying.

“What we are seeing in Khayelitsha is what we will soon see throughout Africa if there is not a focused push for urgent change,” said Dr Eric Goemaere, medical co-ordinator for MSF in South Africa. “We need to provide the most robust first-line treatment possible, to detect treatment failure through monitoring HIV levels in the body before patients show symptoms, and to provide access to affordable second and third-line treatment combinations. None of this is happening now, which means that thousands of patients are back on AIDS death row.”

Unlike older first-line drugs, most second- and third-line drugs are patented and priced out of reach for patients in developing countries. In some of these countries, switching from a first- to second-line regimen increases treatment costs as much as 17-fold.

To stop spiraling costs, countries will have to routinely use measures such as compulsory licenses, which allow the generic manufacture of drugs under patent to ensure affordable treatments. MSF is recommending that drug companies put their AIDS drug patents in the “patent pool” that the international drug financing agency UNITAID is creating to allow poor countries to access critically needed drugs at affordable prices. The patent pool will provide generic producers or researchers with drug licenses in exchange for a fee paid to the originator company.

“It is a question of choice for national and donor governments,” said Dr. Tido von Schoen-Angerer, director of MSF’s Access to Essential Medicines Campaign. “Will they give poor people just a few extra years of life, or the same chance for long-term survival as people with HIV/AIDS in rich countries?”