Read MSF's submission to the US trade representative on the 2012 Special 301 review process, which affects accessibility of medicines and important diagnostic tools. 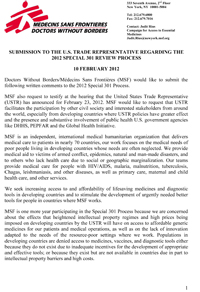 February 10, 2012—MSF seeks increasing access to and affordability of lifesaving medicines and diagnostic tools in developing countries and to stimulate the development of urgently needed better tools for people in countries where MSF works.

MSF is once again participating in the Special 301 Process because we are concerned about the effects that heightened intellectual property regimes and high prices being imposed on developing countries by the USTR will have on access to affordable generic medicines for our patients and medical operations, as well as on the lack of innovation adapted to the needs of the resource-poor settings where we work. Populations in developing countries are denied access to medicines, vaccines, and diagnostic tools either because they do not exist due to inadequate incentives for the development of appropriate and effective tools or because they exist but are not available in countries due in part to intellectual property barriers and high costs.

The higher and inadequate standards of intellectual property that USTR is pursuing though the Special 301 Process are a direct threat to generic competition and to the treatment that we provide to our patients. In submitting these comments, MSF is concerned about the difficulties in both ensuring access to medicines and exploring new incentive mechanisms for research and development relevant to our patients and our medical operations in developing countries.

Specifically, MSF is concerned by the US government’s use of unilateral trade pressures such as the Special 301 review process to challenge efforts by developing countries to ensure access to medicines for their populations through the use of flexibilities allowed under international law (e.g., compulsory licenses, data protection, or patentability criteria). The future of generic competition, the sustainability of treatment, and the possibility of new incentive mechanisms and business models relevant to our patients in developing countries is further threatened by the increased intellectual property protection that the US government is asking developing countries to adopt.

The Special 301 mechanism is only one tool that the US government has used to this end. The United States is aggressively advancing a TRIPS-Plus agenda, seeking intellectual property protections more extensive than those under international law and the WTO TRIPS agreement through ACTA and TPP negotiations. Our recent press release and statements on the Transpacific Partnership Agreement negotiation should therefore also inform this process.

The problem of access to medicines extends to any new drug, diagnostic test, or vaccine needed to treat, detect, or prevent a range of diseases affecting the people we treat in developing countries.

It is important to note that the problem of access to medicines is not limited to HIV/AIDS and other communicable diseases. The global burden of non-communicable diseases is increasing worldwide, with the heaviest burden falling increasingly on the low- and middle-income countries. As the UN HLM on NCDs recognized last year, it is essential to increase access to affordable, safe, effective, and quality medicines and diagnostics and other technologies, including through the full use of trade-related aspects of intellectual property rights (TRIPS) flexibilities. The magnitude of the HIV/AIDS pandemic has not only highlighted the fact that millions in the developing world do not have access to medicines needed to treat disease or alleviate suffering because they or their governments cannot afford them, but also the benefits that generic competition has had in reducing the cost of treatment.

More than six million people across the developing world are on antiretroviral treatment (ART). This success would not have been possible without generic competition bringing the price of first-line ART down by 99 percent, from over $10,000 in 2000 to under $150 today.

While this represents important progress, approximately ten million more people are in immediate need of treatment according to current WHO treatment guidelines, a testament to the emergency that is the HIV/AIDS pandemic. Furthermore, with growing numbers of patients in developing countries having been on treatment for five years or longer, new challenges are emerging to ensure their long-term survival. As resistance to medicines inevitably develops, people on ARVs will need to be switched to newer, more expensive drugs. MSF data shows how this will impact the cost of treatment programs—the WHO-recommended second-line treatment is three times more expensive than the most affordable first-line regimens, and possible third-line regimens are estimated to cost over 20 times more than the most affordable WHO recommended first-line.

2011 was a historical year for the scale up of the HIV/AIDS response. In June at the UN High Level Meeting on HIV/AIDS in New York the United States, with other UN Member States, committed to "15 by 15": scaling up to a total of 15 million people on HIV treatment by 2015. A few months later, NIH released new data that has proved that treatment of HIV can reduce the transmission of the disease by 96 percent, so that treatment is also prevention, making the scale-up of treatment all the more urgent. During World AIDS Day, the Obama administration responded to this new science and called for an AIDS-free generation and announced an increase in the US government's global commitments to support the fight against HIV/AIDS.

Funding for AIDS has declined, leaving the Global Fund to Fight AIDS, TB, and Malaria, the US government’s PEPFAR, and national programs short of resources. The US government argues that these expanded targets are possible in a constrained budget environment due to “relentless work to bring down costs and find efficiencies. The per-patient cost to the U.S. of providing anti-retroviral treatment has fallen by over 50 percent since 2008 because PEPFAR has invested carefully, tailoring prevention to countries’ urgent needs, using generic drugs . . . ”.

However, USTR-pursued strategies in the Special 301 List and other strategies, like the Transpacific Partnership Agreement, are in contradiction with, and will in fact directly threaten, the US government's global health priorities and commitments by making it more difficult to rely on cost-saving generics. In times of economic crisis, the USTR is not only perpetuating a failed incentive model to protect big pharmaceutical corporate interests but also threatening the possibility of more affordable competition in the treatment of diseases relevant to patients living in developing countries.