One in seven women dies from pregnancy or pregnancy-related complications. One of every seven children dies before they reach the age of five. 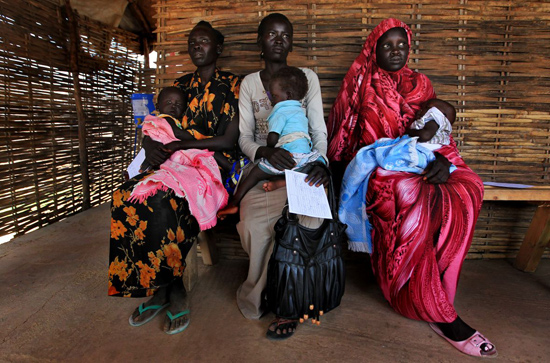 Mothers and their children at MSF's program in Abyei.

Since 2006, Doctors Without Borders/Médecins Sans Frontières (MSF) has been providing much needed primary health care in the troubled Abyei region of southern Sudan. Working in this tense area has become more and more difficult of late, but the needs remain huge. The maternal and child mortality rates are among the highest in the world.

One mother recounted the birth of a child who would have died without proper care: “I was only six months pregnant,” she said. “I could feel myself go into labor. I had really bad back and stomach pain. I was worried, so I walked to the hospital. My baby, Litiong, was born very soon after. He only weighed 650 grams [not quite 1.5 pounds]. I was sad, but whether he was going to survive or not was not a question for me to answer. It was always going to be in the hands of someone else.”

“The baby was delivered in our hospital and he was not breathing,” recalls Ines Hake, a nurse and leader of the medical team at the MSF hospital in Agok. “His heart was really weak, so we performed resuscitation. Later on, he developed infections so he needed intravenous antibiotics for a long time. We had to feed him using a nasogastric tube, and we also had to use the oxygen generator so that the baby could recover. We were finally able to send him home after nearly nine weeks of intensive care.”

Litiong was one of the lucky ones. Shattered by decades of civil war, its infrastructure weak and its health care system facing chronic shortages of trained staff, southern Sudan has some of the world’s worst health indicators. The statistics are alarming. One in seven women dies from pregnancy or pregnancy-related complications. One of every seven children dies before they reach the age of five.

“Without the presence of this hospital, which was able to ensure a safe delivery for the mother, without the treatment the baby was able to receive afterwards—including oxygen, resuscitation, and medication—this would have been an entirely different story,” says Hake. “If this baby had been delivered at home, which is normal here in Sudan, he would never have survived.”

MSF is addressing this need and others in two projects located in what is known as the Abyei “transitional area," an oil-rich area swathe of land that has long been at the center of a territorial dispute between the north and the south. In May 2008, fierce fighting almost destroyed the town of Abyei, where MSF was working at the time, and caused approximately 50,000 people to flee to nearby Agok, 40 kilometers [24 miles] away. In response, MSF set up an additional program in Agok, where it is still, to this day, the only provider of hospital care in the town. A smaller team continues to run an outpatient program in Abyei focusing on primary health care, treatment for malnourished children, and care for pregnant women.

MSF also ran mobile clinics into northern Abyei, which is severely lacking health services. But of late, the situation has been so tense and access to the area so limited that MSF was forced to suspend these mobile clinics last July.

Next week, the people of southern Sudan will vote in a historical referendum to decide whether they wish to remain united with the north or to form the world’s newest country. Abyei and Agok residents will vote in a separate referendum to decide whether they wish to join with the north or south. But amidst the political debate about the outcome of these referendums and widespread speculation about impending violence, the medical and humanitarian needs in the region remain enormous, particularly for women and children.

A major component of MSF’s assistance in Abyei and Agok is a comprehensive antenatal and maternal care program. Through community education in Agok and the surrounding areas, as well as the referral system that is offered to pregnant women from MSF’s nearby program in Abyei, more and more women are coming to the hospital to give birth. This ensures that they will have quality care for their newborn child and access to the three essentials for a normal delivery: skilled birth attendants, drugs if necessary, and equipment to facilitate a safe birth. In its hospital in Agok, MSF now carries out an average of 60 to 80 deliveries per month.

Today, defying the odds, Litiong is six months old. But he has been admitted again, vomiting and with diarrhea, to the MSF hospital. He is malnourished and currently receiving treatment. The nurses say he is doing well and will be able to go home soon. Sitting in MSF’s therapeutic feeding center with his mother, he is the embodiment of the medical needs that are likely to exist in southern Sudan for many years to come, regardless of the result of the impending referendum.

MSF activities in Agok and Abyei

MSF’s hospital program in Agok provides a wide range of care including maternity, inpatient and outpatient care, a pediatric unit, a tuberculosis ward, and a therapeutic feeding center for malnourished children. Teams also run mobile clinics from Agok three times a week to the surrounding remote areas, focusing on children under five. Between January and December 2010, 31,199 outpatient consultations were carried out, more than 3,679 pregnant mothers were seen in the antenatal clinic, and more than 2,389 children were treated for malnutrition.

An outpatient program in Abyei, which provides antenatal care, primary health care, and treatment for malnutrition, refers all deliveries and other serious cases to Agok. Between January and December 2010, the team provided 2,510 antenatal consultations and treated 334 children for severe malnutrition.