More than 500,000 people have arrived in Sukkur. Reportedly, one out of every three people there is a newcomer seeking dry shelter anywhere; empty school buildings, streets, and even old railway lines are full of people who need food, medicine, and safe, clean water. 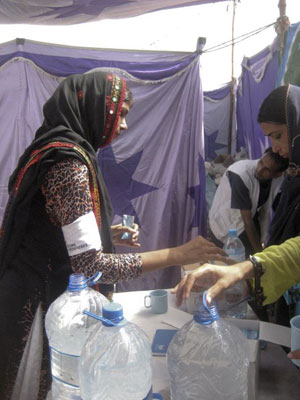 The battered sign reads: “Welcome to Sukkur: City of Rivers and Canals."

More than five weeks have passed since the floods first struck Pakistan, and some of the water has started to recede in Khyber Pakhtunkhwa and other provinces.  However, as it travels south—fresh floods have hit Sindh Province recently—it forces hundreds of thousands of people to leave their homes.

Fleeing Jacobabad, Kashmore, Shikarpur, and Shadadkot, more than 500,000 people have arrived in Sukkur. This city of rivers and canals in the North of Sindh is now home for those displaced by floodwaters. Reportedly, one out of every three people in Sukkur is a newcomer seeking dry shelter wherever they can find it. Empty school buildings, streets, and even old railway lines are full of people who need food, medicine, and safe, clean water.

Mohssen Ali, 54, and his family of ten were among the first to settle on a plot of land in Sukkur where Doctors Without Borders/Médecins Sans Frontières (MSF) has distributed tents to 150 families. “It took me years to make a house for my family, and now it’s just a pile of mud,” he said. “The water drove us out of Kashmore so quickly, I couldn’t even get my wife her medicine. She has a chronic heart problem and I don’t know how long she will last without her pills. I can’t even buy food for my children. I’m their father, I have to take care of them, but I can’t. What are we going to do?”

Medical Care on the Move

Improving access to essential health care services is one of the priorities of MSF teams working in Sukkur today.

“The influx of people has stretched the capacity of the 13 hospitals in this area to the limit,” said nurse Anja Braune, who is in charge of MSF medical activities in Sukkur. “At least half of the people being seen in hospitals now are from the displaced population. I’ve seen three or four patients on the same bed.”

To reach those who cannot access the health centers, MSF teams are now conducting mobile clinics in various locations in the area. Screening for malnutrition is one of the main components of the mobile clinics. By measuring the middle-upper arm circumference, health workers are able to identify moderate to severely malnourished children who need support, and refer them to the recently opened MSF-run intensive therapeutic feeding center (ITFC) in Railway Hospital.

To prevent dehydration among the displaced population, MSF teams are setting up oral rehydration salt (ORS) points. Established in camps and schools and staffed by two health workers, these sites provide rehydrating solution for anyone who needs it. MSF nurse Petra Frankuizen is in charge of setting up more than nine ORS points and training the 15 health workers who all come from Sukkur. “The heat is unbearable, and the water is contaminated,” said Frankuizen. “The combination of the two means that a lot of people, especially children, are thirsty and dangerously dehydrated.”

The poor living conditions, including bad hygiene and sanitation, are quickly transforming the schools and makeshift camps into sites where waterborne diseases, such as acute watery diarrhea, can flourish. MSF epidemiologist Todd Swarthout has been working to get a better picture of the health needs of the displaced in Sukkur. “One of the main challenges is the size of the area and the overwhelming number of people,” he said. “I’ve visited schools where hundreds are using the same toilet. Cramped spaces with poor sanitation and too many people are simply breeding grounds for disease.”

In Sukkur, there are three main treatment plants drawing water from the Indus River, which is the main source of water. However, the river has very high turbidity—a measure of cloudiness. This means that an efficient filtration system is essential for the water to be useable. Although some people can afford to purchase drinking water from private vendors, for the remaining majority there is not much water available, and what is available is not good quality.  For this reason, the provision of safe, clean water is another main priority for MSF staff working in Sukkur. Teams have installed two 5,000-liter refillable containers in an internally displaced persons’ camp, and put in place a purification system that treats water directly from one of the town’s water plants.

“We are targeting the health structure so that at least sick people are not given the same bad water that made them ill in the first place, ” said Imran Ali, an MSF water-and-sanitation technician.

By putting in place an assisted direct pressure  filtration system, up to 80,000 liters of safe water is now being provided daily to health structures around Sukkur, but more still needs to be done.

“The situation is very precarious here because there is no chlorination happening anywhere. If there is any contamination that enters the river, it’s going to wind up directly in people’s homes, boreholes, and wells, making everybody ill,” said Ali.

Clearly, the relief efforts of national and international organizations working in Sukkur must scale up and continue working in order to match the various needs of the displaced people there.  In a few weeks, the schools are due to reopen, which means that most of the people huddled in the now empty school buildings will need to find another place to go. Children, like 12-year-old Yasmeen Haj, will bear the consequences of the floods long after the water recedes. “Maybe it is weeks or months from now,” said Haj, “but everybody is praying to go home eventually. Baba died last year, and we lost our mother in the floods. My brother is only five, so I’m his mother now. We have nowhere to go back to.”

Currently, 152 international staff are working alongside 1,279 Pakistani staff in MSF’s programs in Pakistan.