Syria: Despite Ceasefire, "Catalog of Horror" Continues in Besieged Areas

View Photo MSF
The MSF-supported hospital in Ma’arat Al Numan before it was attacked and destroyed on Monday 15th Feb. At least 25 people were killed, including nine staff members. The 30-bed hospital had 54 staff, two operating theatres, an outpatient department and an emergency room. The outpatient department treated around 1500 people a month, the ER carried out an average of 1,100 consultations a month, and around 140 operations a month, mainly orthopaedic and general surgery, were carried out in the operating theatres. MSF has been supporting this hospital since September 2015 and covered all the needs of the facility including provision of medical supplies and running costs.
MSF
Click to hide Text

BRUSSELS/NEW YORK—Despite a ceasefire in fighting and the arrival of humanitarian convoys, the situation remains critical in many besieged areas of Syria, said the international medical humanitarian organization Doctors Without Borders/Médecins Sans Frontières (MSF) Thursday.

"The catalog of horror continues virtually unabated in many besieged areas," said Dr. Bart Janssens, MSF director of operations. "Over the past two weeks in the besieged areas in Damascus region, a doctor has been shot dead by a sniper, two of the field hospitals we support have been bombed, besieged neighborhoods continue to be shelled, and medical aid is still blocked or restricted."

Last week the only medical doctor remaining in the besieged town of Zabadani, and a member of a rescue team, were shot dead by a sniper after treating a patient.

In most besieged areas there are few medical doctors left, in some places none left at all. Some have fled for their lives and many have been killed in bombings or shellings. MSF documented 23 Syrian health personnel supported by the organization who were killed in 2015 and 58 who were wounded.

In some besieged areas, it is common to see medical or nursing students with limited training who are learning by doing. They strive to the best of their ability, and while MSF tries to provide technical advice and support from a distance, this makes it impossible for any technically difficult medical care to be provided, and also makes correct diagnosis of medical conditions extremely challenging.

Last week two MSF-supported field hospitals, a nearby school, and inhabited buildings in the besieged East Ghouta suburbs were bombed, leading to at least 38 killed and 87 wounded, of whom five were medical staff.

The medics in these areas have only received extremely limited supplies over recent months, and rely mostly on MSF and other humanitarian organizations’ support to source medical supplies through clandestine methods.

Over the past few weeks several besieged areas in Damascus region where MSF provides support to Syrian medical facilities have been hit by shelling attacks, including Al Marj, Deir Al Safir, and Zebdine.

Even when the rare international aid convoys are allowed to go to besieged areas, MSF-supported medics report that essential lifesaving medical items such as surgical and anesthetic supplies and blood bags are missing and there are usually grossly insufficient quantities of intravenous fluids. These are exactly the items that are vital to treat victims of bombings or shelling, and are essential to treat accidental trauma and for Caesarean sections or some complicated deliveries. The UN has recently declared that 80,000 medical treatments have been excluded or removed from their convoys so far in 2016.

From the 40 medical facilities in regularly supported by MSF in the besieged areas in the Damascus region, very few patients have been authorized for medical evacuation, despite long lists of patients that are in critical condition and require lifesaving treatment that is simply not available in their area. In Madaya, over the past week five people died, three of whom could probably have been stabilized and treated if urgently called-for medical evacuations had been permitted (a child who died a few hours after an accident when playing with an unexploded device without having been able to be evacuated, one elderly person from a suspected cerebrovascular disease, and one young man who died from malnutrition). 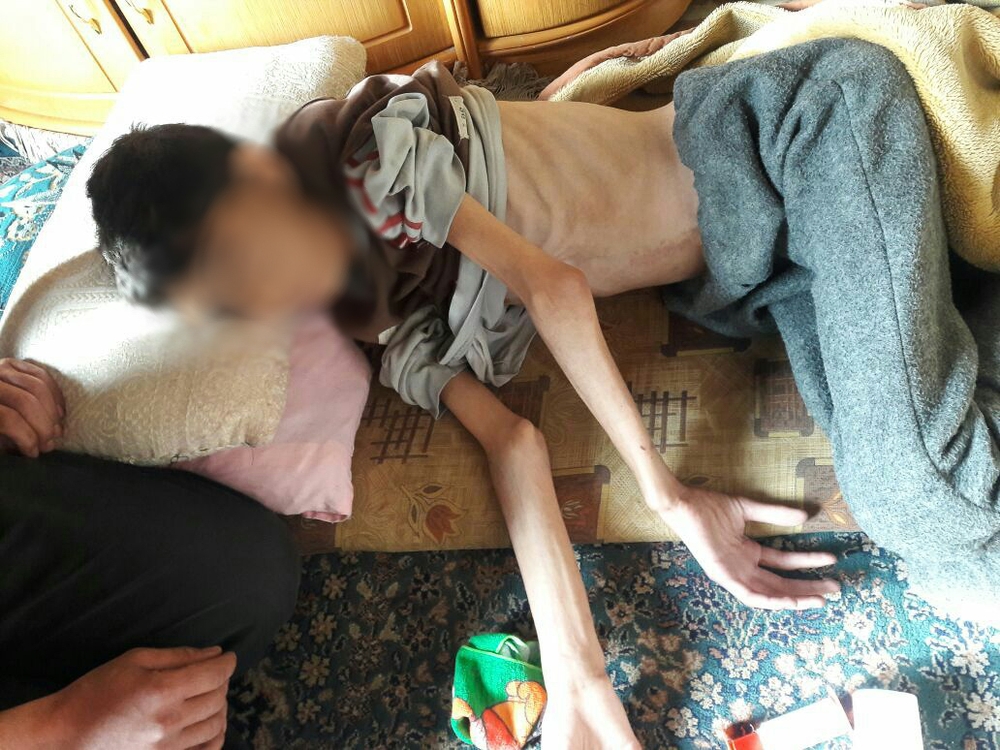 April 2, 2016: Seventeen-year-old Mohammed was photographed at his home in Madaya. He died of malnutrition two days after this photograph was taken.

For five months he had been a trauma patient with neurological damage. Because of the total siege around Madaya town, the treatment the medics could offer him was insufficient and there was almost nothing for him to eat. By the time international aid convoys arrived in January 2016, he was in an extremely weak state, and the medics, who have no specific training in treatment of malnutrition, were unable to prevent him getting increasingly malnourished and weak.

His face has been blurred in order to protect family members still living in the besieged area.

Despite the convoys, more than one hundred malnutrition cases have been identified by the local medical team in Madaya and seven cases of severe malnutrition have been diagnosed in Madamiyeh.

Some areas, such as Daraya and Duma, remain completely blocked for any official humanitarian access, and repeated closure of access in the besieged neighborhoods of Barzeh, near Damascus, and El Waer, near Homs, are alarming.

"We reiterate our call for an end to indiscriminate or targeted violence on civilians or civilian areas," said Dr. Janssens. "And we stress again the urgent need for medical evacuations and for unhampered and sustained humanitarian supplies to be permitted to pass freely into all areas where people are in need, with the priority being areas that are under siege."

In areas where security permits, MSF runs six medical facilities across northern Syria. In much of the country the intensity of the conflict and the lack of official authorization from the government prevent MSF from running health facilities. MSF provides regular support to more than 70 Syrian medical facilities and provides occasional donations of medical supplies to around 80 other Syrian health structures. There is a particular focus on providing support to medics in besieged areas. These supported facilities are run by Syrian medics, without MSF staff present.

The MSF-supported hospital in Ma’arat Al Numan before it was attacked and destroyed on Monday 15th Feb. At least 25 people were killed, including nine staff members. The 30-bed hospital had 54 staff, two operating theatres, an outpatient department and an emergency room. The outpatient department treated around 1500 people a month, the ER carried out an average of 1,100 consultations a month, and around 140 operations a month, mainly orthopaedic and general surgery, were carried out in the operating theatres. MSF has been supporting this hospital since September 2015 and covered all the needs of the facility including provision of medical supplies and running costs.
MSF