A measles epidemic is sweeping through northern Syria, a consequence of the civil war–related collapse of the country’s health system. 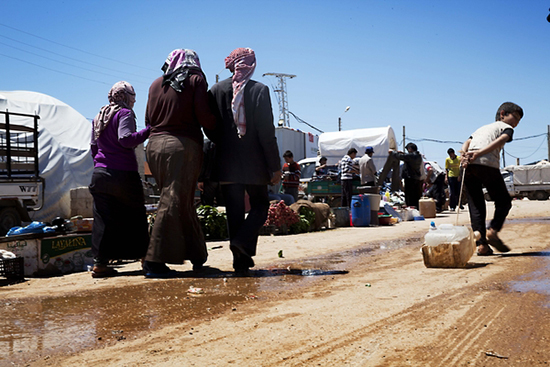 A transit camp in Aleppo province, next to the Turkish border.

The epidemic indicates a worsening of the humanitarian crisis in northern Syria and the desperate situation in which much of the population is living. Syria's routine vaccination programs were disrupted by the onset of violence in 2011, the targeting of medical workers and health facilities, and the displacement of millions of people to camps and into other overcrowded, unsanitary makeshift living conditions. MSF medical teams have vaccinated more than 75,000 children in Aleppo, Ar-Raqqah, and Idlib Provinces.

At least 7,000 cases of measles have occurred in northern Syria since the outbreak began, and while mortality rates remain relatively low, measles makes children susceptible to infections that can be fatal when basic medical care is unavailable.

Disease-related mortality rates are rising in Syria, especially among the most vulnerable, because of a lack of access to basic health care and preventive measures such as vaccinations. MSF has prioritized reaching vulnerable groups through its five field hospitals and other medical programs in northern Syria.

"Children, pregnant women, and the elderly, as well as people suffering from chronic diseases like asthma and hypertension, have been a priority in our response to the humanitarian crisis in Syria," Sancristóval said.

While MSF teams have vaccinated more than 15,000 children in the city of Aleppo and more than 22,000 in the rest of Aleppo Province, widespread violence and fear made completing the measles vaccination campaign very difficult. Lines of people assembling for vaccinations were avoided for fear they might attract airstrikes or rocket attacks.

In Ar-Raqqah Province, MSF has vaccinated 35,000 children so far, but in just one of the three districts. The partial coverage, due to security constraints, leaves thousands of children vulnerable to the disease.

In Idlib Province, 164 cases of measles were reported in May. The number of cases continues to rise, despite MSF's mass vaccination campaign in February, which covered 1,900 children under the age of five in an area close to the border where more than 40,000 internally displaced people were living.

MSF is planning to carry out a second mass vaccination in Idlib's camps and surrounding villages for all children under 15. The target group is roughly 10,000 to 30,000 children, but it is difficult to accurately gauge the size of the shifting population.

The new surge in measles in the Idlib area is likely due to the continuous arrival of displaced people fleeing the fighting, a situation now unfolding in many parts of northern Syria.

MSF runs five hospitals in northern Syria in areas controlled by armed opposition groups. MSF negotiates access with all parties, but has yet to receive official authorization to work inside the country. Since the conflict began, MSF teams have carried out 46,000 medical consultations, 2,481 surgical procedures, and 854 deliveries.