Taking Refuge in Uganda as Conflict Rages in DRC 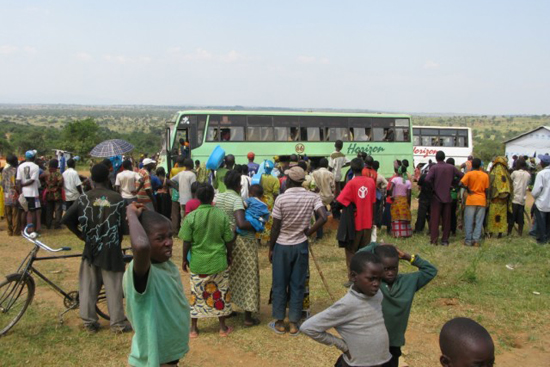 Refugees from arrive in Nakivale, Uganda, from Matanda camp, which is just over the border with DRC.

Civilians are fleeing to Uganda to escape the conflict in eastern Democratic Republic of Congo (DRC). Refugees in Matanda camp, which serves as a transitory camp, just over the border in Ishasha, say they are afraid to go back, fearing violence, massacres, and forced conscription into the military or armed groups. The little news they receive from relatives who remain there reinforces their belief that it is not safe to return.

The following are testimonies from some of those refugees. Carrying the few belongings with which they could escape and trying not to lose their children in the masses of people, they crowded the roads out of DRC, walking day and night to find safety across the border. In Matanda camp, they wait for transport to Nakivale, their final destination, and hope for a better future. However, living conditions in Nakivale are difficult, and chances for a better life there are limited.

Mirindi used to be a nurse in Goma. On October 29, 2008, an armed group entered her home, killing her husband, her daughter, her parents, and her in-laws. She was then raped.

One morning she was able to escape with her four children, ages 9 to 16 years old, and the five children of her brother-in-law, ages 12 to 20 years old. They tried to avoid military groups but did not know where to go for safety.

In Giseni, they were advised to go to Kisoro and cross the border to Uganda. From there, she was transferred with her family to Nakivale refugee camp. When she arrived in Nakivale on December 12, she went to the MSF clinic. She was still in pain from the beating sustained during her rape. She was treated by the MSF team and she is now recovering. She does not want to go back to DRC.

Winana is a 16 year old woman who recently gave birth to a premature boy. She left DRC a month and a half ago with her husband to escape the fighting in the area of Uganza. Many people decided to leave this area en masse after rumors of massacres by armed groups and the fear that the military might do the same.

When they left their village they did not know where to go and were advised to go to Uganda through the Ishasha border point. When she arrived with her husband in Matanda camp, Winana went directly to the emergency MSF clinic. She was delivering a premature infant and was transferred immediately to a hospital for a Cesarean section. She hopes to move with her husband to Nakivale as soon as she recovers, since it is not possible to go back to Congo.

Sengimivuni used to live in Rutshuru. When the fighting began, he decided to leave with his wife and five children. Like thousands of people, they took the road to Ishasha, to cross the border into Uganda. From there they were transferred to Nakivale in early December.

Although the place is safer than DRC, living conditions remain difficult. He would like to go back to DRC with his family, but he fears being attacked and losing the little he has. He is in regular contact with people still in DRC and does not feel comfortable going back now.