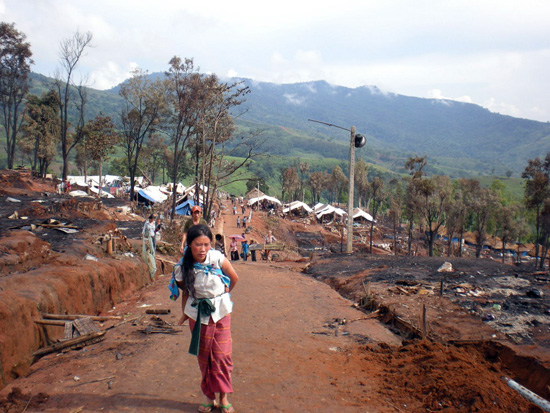 On Friday, May 23, a fire destroyed close to 60 percent of the houses in the Huai Nam Khao refugee camp in Petchabun province in northern Thailand. The blaze took hold after a week-long demonstration in the camp, which is home to nearly 8,000 Lao Hmong refugees, to protest the arrest of a community leader and the imminent threat of a forced return to Laos.

Many of these refugees have told Doctors Without Borders/Médecins Sans Frontières (MSF), the sole nongovernmental organization working in the barbed-wire, military-controlled camp, of a life in Laos spent fleeing violent attacks and persecution, and enduring malnutrition and disease. MSF has been assisting this refugee population since 2005. MSF has called on the Thai and Lao governments to immediately stop the refugees' forced repatriation without independent monitoring and guarantees for their safety. Gilles Isard, MSF head of mission in Thailand, describes the recent events in the camp leading up to the demonstrations and fire.

What prompted the week of demonstrations?

On May 16, one of the Hmong leaders in the camp was arrested by the Thai army on the charges that he had given a phone interview to Radio Free Asia and that he was in possession of alcohol. At the same time, rumors were allegedly circulating in the camp that the Thai army was planning to send him back to Laos. This prompted thousands of people to start demonstrating in support of him. The very same day, the leader, with the help of his wife, chained himself to the camp’s main gate in order not to be sent to Laos. He stayed chained at the gate until Friday when the fire started. At the same time, a hunger strike was started in the camp. People started coming to our outpatient clinic complaining of weakness and in hysteria.

What else were the refugees protesting?

The demonstrators have been demanding that the United Nations step in to the situation to protect their rights as refugees. The UN High Commissioner for Refugees, or any other third party, has not been allowed to enter the camp to carry out an independent screening of their claims for refugee protection. They demanded that the UN representatives come to the camp before May 25 and if not, they said that they would take action to provoke the army and create chaos in the camp. Two people threatened to kill themselves and their family before the end of the month if UN did not step in.

Did the tensions continue to build in the camp? 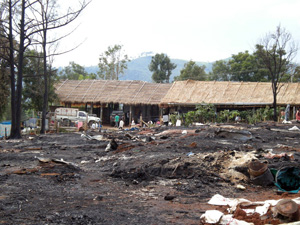 On Friday, before the fire started, the situation was highly explosive and we really thought that things were going to get out of control. Thousands of refugees destroyed the fence and moved out of the camp protesting in front of the military, some of the refugees were hiding knives in order to get ready for a confrontation with the Thai military. The Thai military remained calm and did not respond to the provocation. Otherwise, it would have been really chaotic.

We do not know who set the fire, but we know that most of the refugees had the chance to collect their main belonging before going away from the burning houses. Nobody was injured. In all, about 850 houses out of 1,400 were completely destroyed as well as the surrounding latrines and some of the piping for the water system.

What are the living conditions in the camp since the fire? 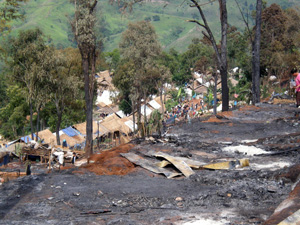 Following the fire, people slept anywhere they could—in the remaining houses, in the churches and school buildings, in the military compound, in the MSF warehouse and clinic, and in some makeshift emergency shelters. Saturday, several hundred people were still outside the camp sitting on the road and protesting. They continued to demand the presence of the UN and say that they will not return into the camp until UNHCR comes and listens to their claims. Our team has been supplying plastic sheeting and blankets to the refugees for the past days. We have also repaired the water system and are repairing the latrines in order to control the sanitation

How do you think it came to this situation? 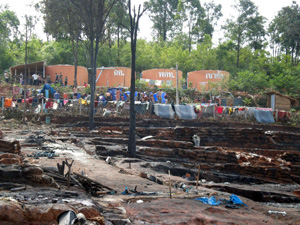 The tension in the camp has been mounting for months since the Thai authorities conducted a screening process without any independent oversight and announced the intention of returning all the Hmong before the end of 2008. We are talking about an already highly traumatized population. The stress of life in the camp for refugees who report a long personal history of traumatic events in Laos continues to intensify in the face of ongoing uncertainty about their future. Through our mental health program, 96 patients have been seen for psychological consultation. MSF staff living in the camp report there are many more whom suffer symptoms of stress but are not yet referred.

Nearly every day, new faces come to the consultation room door and ask to be seen. Of those seen, 93 percent report a lifetime of loss, torture, running, hiding, and starving in the mountainous jungles of Laos. Patients present extensive documents showing photos of the dead and relatives in military uniforms, papers showing the family’s connection to the US Central Intelligence Agency during the US-Vietnam War, and maps of hiding places and routes of escape from attacks. While many details differ, the elements are quite consistent. Of the 96 patients seen for consultation by our psychologist nearly 50 percent threaten suicide if they are forced to return to Laos.

Have there been other episodes to heighten tension in the camp?

This is just latest serious incident in the camp. On February 27, 2008, four Hmong families—11 individuals—were sent back to Laos. According to Thai authorities, the four families were registered on a list of voluntary returnees. But statements given to MSF from witnesses in the camp do not corroborate this account. On that day, Thai soldiers examined their registration cards and screened them. They then separated 12 people from the group and had them board military vehicles. According to these witnesses, several people were clearly being forced to board the vehicles. A woman with 5 children, ages 2 to 15, was compelled to leave even though her children were still in the camp, making the claim that she was returning voluntarily to Laos doubtful. She managed to escape and her whereabouts remain unknown. She is still separated from her children in the camp.

Additionally, alleged abuses perpetrated against Lao Hmong refugees who have been forcibly returned to Laos have intensified the stress and anxiety among the people in the camp. In December 2005, 27 Lao Hmong children (5 boys and 22 girls) from Huai Nam Khao were arrested by the Thai police and sent back by force to Laos. Twelve of the girls managed to come back to Thailand and join their parents in the camp in May 2007. They told MSF staff of enduring repeated beatings, rapes, and other abuses during their detention in Laos. Ten girls and five boys are still in Laos, their whereabouts and fates unknown. Such incidents have only heightened anxieties among the population living in the camp.

What is MSF calling on the governments of Laos and Thailand to do?

Because of the credible fear among the Lao Hmong refugees in the Huai Nam Khao camp, MSF is urgently calling upon the governments of Thailand and Laos to stop the forced repatriation proceedings against the Hmong refugees in Huai Nam Khao until an independent, third party can review the government's screening process and refugee status determinations. And if repatriations are to take place, we are also asking both governments to allow an independent, third party to assess the areas of return and the adequacy of assistance offered, monitor all repatriations, verify the voluntary nature of returns, and continued safety of returnees. International standards state that repatriation cannot be forced or imposed on individuals fearing for their safety and any repatriation must remain linked to guarantees for safety upon return. For the Lao Hmong refugees, none of these conditions have been met by either the governments of Thailand and Laos.