MSF denounces the policy of forced repatriation of the Hmong population of Huai Nam Khao camp back to Laos, and refuses to work under military pressure

MSF denounces the growing pressure applied by Thailand’s army to force the 5,000 Hmong refugees living in Huai Nam Khao camp, in northern Thailand, to return to Laos. Increasingly restrictive measures have forced MSF to put a stop to its assistance activities after some four years of presence in the camp. 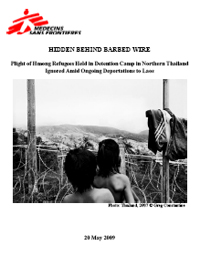 Bangkok/Paris, 20 May 2009—Doctors Without Borders/Médecins Sans Frontières (MSF) denounces the growing pressure applied by Thailand’s army to force the 5,000 Hmong refugees living in Huai Nam Khao camp, in northern Thailand, to return to Laos. Increasingly restrictive measures have forced MSF to put a stop to its assistance activities after some four years of presence in the camp.

The Thai and Laotian governments effectively reasserted last March that they aim to repatriate all the Hmong back to Laos before the year is out, and without any external supervision. The number of refugees being repatriated has picked up since December 2008, reaching 500 last March.

During the last four months, the Thai army, present in the camp, has introduced increasingly restrictive measures with the aim of pressuring the Hmong into dropping their demands for refugee status and returning “voluntarily” to Laos. The refugees talk of arbitrary arrests and cases of forced repatriation.

Moreover, MSF denounces the methods employed by the Thai authorities, who have stamped out any possibility of offering independent humanitarian assistance to the camp’s refugee population: restrictions on the population’s freedom of access to MSF's assistance, the multiplication of military checks on the Hmong and MSF’s staff. In the light of these conditions, MSF has decided to stop its activities in the camp.

“We can no longer work in a camp where the military uses arbitrary imprisonment of influential leaders to pressure refugees into a “voluntary” return to Laos, and forces our patients to pass through military checkpoints to access our medical clinic,” says Gilles Isard, MSF head of mission in Thailand.

MSF once again calls on the governments of Thailand and Laos:

• To stop the forced repatriation of the Hmong refugees in Huai Nam Khao and allow an independent third party to review the refugee status determinations.

• To allow an independent third party to assess the areas of return and the adequacy of assistance offered, monitor all repatriations, verify the voluntary nature of returns, and ensure the continued safety of returnees.

Furthermore, MSF requests any States that have already resettled Hmong, or could be ready to do so, to offer them an alternative in accordance with international law in terms of protection of people fleeing persecution.

MSF has been providing medical and sanitation assistance to some 7,500 refugees in the Petchabun camp since 2005. Less than 5,000 still remain. It has been the only international organisation present, and could provide firsthand accounts of events in the camp. MSF also works in Maesot, on the Myanmar border, offering care for patients with tuberculosis and infected with HIV/AIDS. Other teams work in Phang Nga, providing access to health care for Myanmar migrants, and in Sangklaburi, where they run a cross-border malaria project supporting ethnic Mon living inside Mon State (Myanmar).