"There Is No Safe Place in Gaza"

"The army is now about two kilometers away in Tal El-Hawa, where there are clashes and a massive presence of tanks. Many families are trapped there and a lot of people are wounded. Again and again there is this massive problem of access." 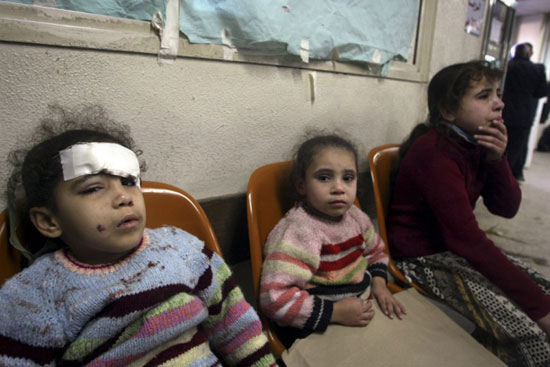 Children injured in the fighting in Gaza City wait for treatment at Al Shifa hospital.

Jessica Pourraz, Doctors Without Borders/Médecins Sans Frontières (MSF) field coordinator, and her team were about two kilometers (one and a half miles) from intense fighting in southern Gaza City yesterday. Here, she describes the situation on the ground.

On Wednesday night the incursion came very close to us in the south of Gaza City. The army is now about two kilometers away in Tal El-Hawa, where there are clashes and a massive presence of tanks. The incursion started last night and was ongoing up to midday today. Many families are trapped there and a lot of people are wounded. Again and again there is this massive problem of access. ICRC tried to coordinate with the Israeli army to evacuate the civilian wounded but did not succeed. Red Crescent ambulances are also trying to reach the wounded people but they have not been able to do it so far.

The sky is completely black, there is a lot of smoke and shelling all the time; it feels like the fighting is very close.

Two of our staff have families in Tal El-Hawa. One of the families managed to evacuate today. They decided at midday to leave because they were under heavy shelling and they were really afraid of what would happen to the building. They didn’t take anything and they just went by foot, walking between the tanks in the streets, and arrived at our building.

We are trying to relocate them to our postoperative clinic, where there are already about 30 people taking refuge. We are very worried about the other family that did not leave. We have no news, and it’s impossible to contact them; the network is completely down. ICRC can’t reach them, and Red Crescent ambulances cannot reach them.

An ICRC building and a UN compound are very close to Tal El-Hawa and the families and people who escaped have gone to these buildings because they think they will be safe there. But, this morning three rockets were fired at the compound, so, as you see and as we’ve said there is no safe place in Gaza anymore, and we are all very worried about that.

Our team is lucky compared to ICRC and UN and the civilians trapped in Tal El-Hawa. We are still in a safe place, pretty far from the fighting, so for the moment we are protected. But we are all downstairs, and we are not going upstairs anymore; we are too afraid of the building being hit by a rocket. We are never sure what will happen, so we are not moving—we are in a kind of hibernation.