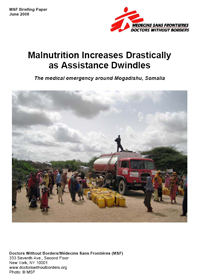 Geneva/Nairobi, June 26, 2008 — The people of Somalia are currently facing a massive humanitarian crisis with unmet critical medical needs. In May alone, Doctors Without Borders/Médecins Sans Frontières (MSF) teams working in the Mogadishu suburbs of Hawa Abdi and Afgooye treated more than 2,500 children suffering from acute malnutrition, with admissions to MSF nutritional programs doubling in April and doubling again in May. Malnutrition rates have exceeded emergency thresholds for a year. The number of new cases is drastically increasing while external assistance is dwindling in quality and quantity due to high insecurity and increased targeting of humanitarian workers. Somalis attempting to flee the violence have few options for escape, as the main border crossings are closed.

“Somalia is no longer on the verge of a catastrophe, the disaster is happening now,” said Bruno Jochum, MSF director of operations in Geneva. “Last week alone, over 500 severely malnourished children were admitted to our nutritional programs. One out of six of these children needed to be hospitalized due to medical complications. If this trend continues, malnutrition may soon affect more of the general population such as children over five-years-old and vulnerable adults. The situation is tragic and we are unable to provide the aid necessary to prevent further deterioration of the situation.”

In the Afgooye-Mogadishu corridor, over 250,000 people are living in extremely crowded conditions and their numbers are steadily increasing as they flee violence in the capital. Less than 10 liters of clean water are available per person per day and most families are living in makeshift shelters that provide little protection. Prices of basic foods, such as rice and corn, have tripled since the beginning of the year and many displaced people rely exclusively on external assistance.

Daily violence continues in and around Mogadishu, taking a heavy toll on civilians. The MSF surgical ward in Dayniile, at the periphery of Mogadishu, has treated over 2,100 people suffering from traumatic injuries since the beginning of 2008. More than half are women and children under 14 years of age, with 56 percent of patients treated for wounds related to violence, such as gunshots and blasts.

This highly volatile security environment prevents any significant evolution in the level and quality of assistance. Humanitarian workers are regularly targeted, abducted, or killed and no organization, including MSF, can work on a regular basis with international staff inside the country.

“Twenty four months after the political and military involvement of international community members in the name of restoring stability and fighting terrorism, the situation is catastrophic for the Somali population,” said Dr. Christophe Fournier, MSF International Council president. “The conflict has escalated, with violence against civilians perpetrated by all sides contributing to the current humanitarian disaster. MSF demands that humanitarian action is kept independent from the political and peacekeeping agenda in Somalia and that all belligerents guarantee safe and unhindered access to aid actors.”

MSF has been in Somalia since 1991. The organization is the main health care provider in central and southern Somalia. In 2007, some 520,000 consultations were carried out, 23,000 patients were admitted to hospitals and 2,500 surgical interventions were performed.

At this time, insecurity prevents MSF from placing international staff permanently on the ground in Somalia. Despite the dedication of Somali staff who continue to run programs and deliver lifesaving medical care in the regions of Bakool, Banadir, Bay, Galgaduud, Hiraan, Lower and Middle Juba, Mudug, and Lower and Middle Shabelle, it is too little in regards to what is needed today in Somalia.