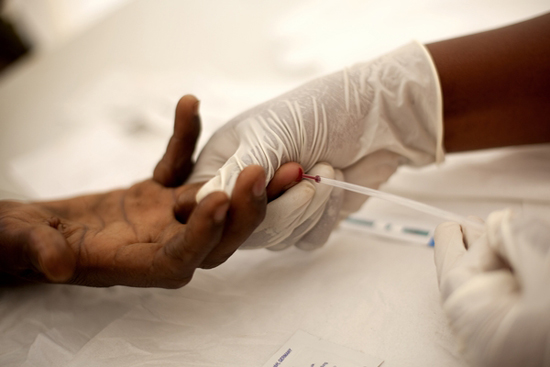 Blood is drawn for an HIV test at the MSF Dipping Tank community testing campaign at Nhletsheni, in Shiselweleni region.

Thirty years into the HIV/AIDS epidemic and more than a decade since the introduction of antiretroviral treatment (ART) in developing countries, the latest scientific evidence shows that the treatment keeps people healthy and prevents the virus from spreading. Doctors Without Borders/Médecins Sans Frontières (MSF) is now treating more than 222,000 people for HIV/AIDS in 23 countries and introducing new approaches to treatment including earlier provision of ART to pregnant women living with HIV, expanded testing and treatment programs, and using improving technological monitoring techniques to track patient progress. Here, Micaela Serafini, MSF medical referent, discusses MSF’s efforts to treat HIV/AIDS in Swaziland.

Why is it important to provide antiretroviral treatment to people living with HIV while their immune system is still strong?

Today, we measure the level of an HIV-positive person’s white blood cells [CD4 cells] to determine when to start them on treatment, because this is an indicator of how strong their immune system is. Right now, the World Health Organization recommends starting people on ART when their CD4 cell count drops to 350 cells per mm3 of blood, but asks countries to consider earlier ART for pregnant women and HIV-positive partners in couples where one person is HIV-positive and the other is not, or “sero-discordant” couples. A healthy person’s CD4 count ranges from 800 to 1,200 cells per mm3—the lower the count, the more prone a person is to becoming ill from opportunistic infections like tuberculosis.

Raising the CD4 count threshold for initiation of treatment from CD4 350 to CD4 500 would be a positive step, since more people would be provided treatment, and we know that starting treatment early keeps patients healthy. We also now know that treatment itself limits transmission of the virus, as proven by a scientific breakthrough last year. Treatment is a critical part of the prevention toolbox.

In Swaziland, MSF is studying the feasibility and acceptance of the “Test and Treat” (T&T) model, the most radical option of Treatment as Prevention (TasP). It involves providing all HIV-positive people with treatment, regardless of their CD4 count. This approach would allow us to have a maximum impact on reducing illness, as well as transmission of HIV in the community.

This approach would allow us to have a maximum impact on reducing illness, as well as transmission of HIV in the community.

We are currently paving the way for TasP in Swaziland with the implementation of a greatly improved treatment protocol for pregnant women in order to better prevent mother-to-child transmission of HIV, or PMTCT, and help keep mothers healthy. The protocol is referred to as “Option B+.” In a nutshell, PMTCT Option B+ is T&T for pregnant women—we aim to start all HIV-positive pregnant women on life-long treatment, regardless of their CD4 count.

In Swaziland, HIV prevalence among pregnant women is extremely worrying, reaching as high as 40 percent. The added value of Option B+ is four-fold: it keeps the mother healthy, it prevents the baby from contracting HIV, it prevents the transmission from mother to child during future pregnancies, and it protects the mother’s partner if he is HIV negative.

This new pilot project is just starting in the south of the country, in the Shiselweni region, which has a population of 208,000 people. We hope to start PMTCT B+ this month and from there put 3,000 pregnant women on ARV treatment every year. In 2013, we will expand this approach to other vulnerable groups and eventually to all HIV-positive adults in the region.

Have people in the community generally been willing to get tested for HIV?

Well, this is where it sometimes gets complicated. We talk a lot about new science and theoretical models show us that if all goes according to plan, we could have future generations totally free of HIV. This is extremely exciting for the scientific and medical community.

So while pregnant women in Swaziland are indeed going to health centers to get tested, testing the men in the community remains difficult. So, we need to change the way we look at things, and the way we do things as well.

So while pregnant women in Swaziland are indeed going to health centers to get tested, testing the men in the community remains difficult. So, we need to change the way we look at things, and the way we do things as well. Since men are reluctant to go to health centers, we need to bring the option of being tested to them. In Swaziland, MSF has implemented community-based testing where a community worker can do the testing and counseling and refer people to the health center if the test is positive. We try to bring the care as close as possible to the people and adapt our way of working according to the population we want to help. We take into consideration cultural aspects, which help us understand why, for example, a lot of men in Swaziland don’t want to get tested for HIV.

Another important aspect of HIV care is making sure people’s treatment is working through regular monitoring. What is “viral load,” and why is MSF using it?

Antiretroviral treatment stops the virus from multiplying, so measuring a person’s “viral load”—the number of copies of the HIV virus in a given blood sample—is important in order to see how people are doing on treatment. When treatment is working and the virus is well suppressed, a person is considered to have “undetectable” viral load. In this case, it is less likely that the person will transmit the virus.

While we measure a person’s CD4 cell level to check the state of the immune system and determine when a person should start treatment, viral load testing shows us whether the virus is still replicating, which is a sign that a person may be having trouble adhering to their treatment. We know from experience that once identified through viral load monitoring, a person with adherence problems benefits from targeted counseling to help get them back on track. Viral load monitoring can also help detect whether the virus may have developed resistance to the drugs they are taking—if this is the case, they may need to be switched to other medicines immediately.

CD4 takes much longer to show how people are doing on their treatment because there is a delay in the immune system’s reaction to the virus. This means we’re not getting people on track until months or even years later, which is not ideal for their health. Testing viral load is like sending an SMS text message, while testing CD4 amounts to sending a letter through the mail.

In Swaziland, we are currently studying the best way to decentralize the use of viral load monitoring to simplify and improve the patients’ follow-up. When you spot treatment failure or poor adherence early it is less likely people will develop resistance to the drugs and the patient’s health is less likely to deteriorate. By decentralizing viral load monitoring, instead of having to travel all the way to the district hospital the patient can get the test done in his or her local health center. This is what we hope to achieve with the mini-labs we set up in remote clinics and health centers. The clinics are now equipped with everything needed to do HIV tests, CD4 counts, pregnancy tests, and biochemistry. Viral load will be added to this package.

By decentralizing viral load monitoring, instead of having to travel all the way to the district hospital the patient can get the test done in his or her local health center.

Measuring viral load has another important role to play: it tells us right away whether a newborn whose mother has HIV is infected or not. This helps us anticipate potential problems and tailor a baby’s treatment. It’s called “early infant diagnosis.”

With the current rapid diagnostic test, children can only be tested to see if they are HIV-positive six months after they stop breast-feeding, because otherwise it is impossible to determine whether the HIV antibodies found in their blood are from the mother or the infant. At present, the risk of death in children with HIV is high, because the tools available don’t allow for them to be diagnosed at birth and therefore start treatment earlier. Thankfully, viral load can change this, but it needs to be scaled up.