MSF continues to assess the needs and provide medical and material support in health facilities in the East and West of Ivory Coast, and to assist refugees and host communities in Liberia. 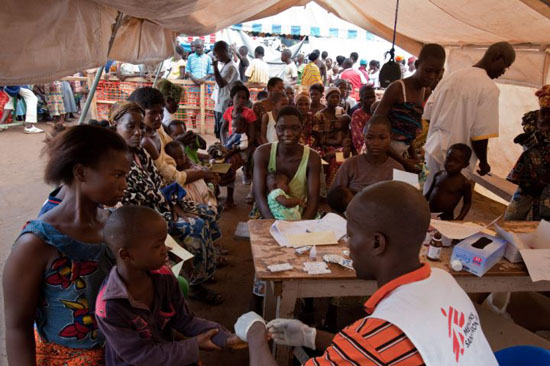 MSF staff tests a child for malaria inside a displaced persons camp in Duékoué.

Doctors Without Borders/Médecins Sans Frontières (MSF) continues to assess the needs and provide both medical and material support in health facilities and places where displaced people have gathered in conflict-stricken areas of Ivory Coast. Teams are also providing assistance to refugees and their host communities in Liberia. 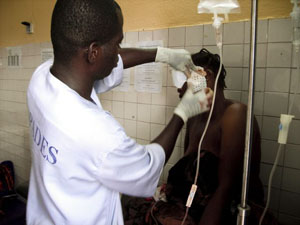 Movement in several areas of the coastal city of Abidjan resumed this week. But serious tensions remain in a number of neighborhoods. As a result, it is difficult to assess the needs in some locations and therefore have an understanding of the greater overall medical needs. What is clear is that the humanitarian emergency is continuing.

Since the health system in Abidjan was paralyzed for 10 days, hospitals continue to struggle with drug and food shortages. MSF teams are rapidly organizing donations of supplies and providing medical care where the needs are most acute, as they have been doing. However, people are still reluctant to seek health care due to continuing fears about security or because they cannot pay for treatment, as required in many health centers.

For now, MSF operations continue in Abobo Sud Hospital, north of Abidjan, where the teams receive between 15 and 20 patients per day, most needing treatment for gunshot wounds or for injuries from sporadic episodes of violence. The exception was on the evening of April 10 and on April 11, the day that former president Laurent Gbagbo was captured, when the team received more than 60 patients wounded by gunfire and 20 wounded in related events. 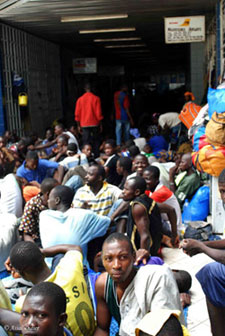 MSF donated drugs and other supplies to the Malian Embassy in Abobo Sud, where 2,000 had taken shelter.

MSF has also made donations of medical supplies to an Ivorian non-governmental organization working in Abobo Sud, and to the Embassy of Mali, where 2,000 Malian people have taken shelter. The team plans to being work to improve hygiene and sanitation there as well.

On April 14, a team began working in one section of the 156-bed Anyama Hospital. They plan to use 50 beds for emergency, surgery, pediatric, and maternity cases.

Teams are also supporting four health structures based in Abobo and Anyama districts with donations of drugs and referrals of severe cases to Abobo Sud or Anyama hospitals.

MSF provided medical supplies to treat 50 wounded people in Treichville Central Hospital, in southern Abidjan, on April 3, working through the Ivorian Red Cross. On April 6, MSF donated additional supplies to the hospital. Intense violence up to April 11 meant several hospitals in the area were unable to receive essential supplies; as soon as security allowed, MSF immediately organized rapid donations to where the medical needs were most acute. On April 11 and 12, MSF made another donation to Treichville Central Hospital. These supplies included high-energy food for patients and staff. MSF also donated essential drugs and medical supplies to Attecoube Maternity Hospital and Yamoussoukro Hospital, and made another donation of supplies to the Ivorian Red Cross. Due to significant numbers of people who need trauma surgery for wounds, MSF will open a trauma center  in Nanan Yamousso Clinic in Treichville during the week of April 18.

The Koumassi General Hospital had stopped functioning during the beginning of the fighting in Abidjan in early April, since most of the medical staff could not come to work. MSF restored free access to primary and general care and to maternity services. The medical teams are seeing an average of 130 outpatients per day and are performing around 10 deliveries per day. Complicated cases are referred to Treichville Central Hospital. Logistic and water-and-sanitation work to the hospital will be needed to ensure hygienic conditions; there is currently no running water.

MSF has donated medical and surgical materials to Yopougon Hospital and set up a drug dispensary in a displaced persons camp.

MSF teams continue to provide primary and secondary healthcare in many locations in the western region of the country, which is one of the most tense and greatly affected areas. The main morbidities are malaria, respiratory tract infections, and diarrheal diseases. Staff also continue to see a worrying amount of wounds from violence related to intercommunal tensions. Many villages were razed to the ground during the post-election conflict, and they lie abandoned while thousands of people are displaced. Many of these people are still hiding in the bush without access to proper food, sanitation, or health care, while others continue to flee to Liberia. It cannot be stressed enough that violence must not be targeted at civilians, and that they must not be prevented from seeking the essential medical and humanitarian assistance they require. 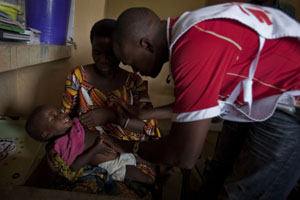 MSF staff examines a child during a mobile clinic held at a health center in Glepleu in the West.

In Duékoué, MSF is working in two health centers—one in a displaced persons camp with 3,000 people, and one primary health center on a site called Cocoma. MSF is also managing the emergency room in Duékoué Hospital and plans to send a three-person surgical team as soon as possible. Currently, teams are referring surgical cases to Bangolo.

MSF also restarted a mobile clinic that had been interrupted on March 3 to the northeast of Duékoué.

In the town of Guiglo, MSF is supporting a 10-bed health center for pediatric cases inside a hospital, providing assistance to 2,000 displaced people sheltering in a church, and distributing water in the city.

Teams plan to begin working with home visitors to reach an estimated 15,000 people in private homes. Activities will include provision of water and essential items and referring pregnant women and sick or malnourished people to the health center.

The town of Blolequin has been largely abandoned, but between 40,000 and 50,000 people lived here before the post-election conflict began. Most people fled into the bush out of fear. MSF has completed assessments and is set to begin mobile clinics in the area.

MSF continues to support hospitals in Danané and Man through donations of medical supplies, while the MSF surgical team continues its urgently needed work in Bangolo Hospital. The surgery team carried out 566 surgical consultations between March 28 and April 10. While the number of people seeking care for violent wounds decreased this week, this does not necessarily mean that violence against civilians has ceased; the situation remains tense in the West.

MSF continues to run mobile clinics twice a week in Bangolo, and also in several locations near the Liberian border, including in Bin Houyé, Zouan Hounien, Danané and Glépleu, where between 70 and 100 patients receive primary healthcare with each mobile clinic visit. People are still hiding in the bush out of fear, and MSF teams are  assessing a number of new areas in which to establish additional mobile clinics. During the week of April 18, teams plan to begin new mobile clinics in Toulepleu, Péhé, and Sahibli.

Tens of thousands of Ivorians have sought refuge in Liberia’s Nimba County. The majority are scattered in villages throughout the county, staying with host families. This massive influx of people continues to put pressure on local communities and on their ability to cope with already-fragile access to basic services such as water or food.

The UN has set up a refugee camp in Nimba County for 15,000 people. So far, about 2,000 people have been staying in the camp. Some refugees have started to go back to their home villages in recent weeks, while at the same time people with fresh wounds are continuing to cross the border into Liberia.

A new wave of refugees has also arrived in Grand Gedeh County, just south of Nimba. MSF teams are organizing mobile clinics for local communities and refugees in many locations in both counties. Teams see an average of 80 patients per day, per location; the main health issue sthey are treating are malaria, diarrhea, and respiratory and skin infections.

Currently, MSF has 50 international staff working together with 150 Ivorian staff in Ivory Coast. In Liberia, there are 10 international staff working with 30 Liberian staff. MSF, an impartial medical humanitarian organization, which observes strict neutrality in its operations. Its activities in Ivory Coast are funded exclusively by private donors, ensuring the organization’s complete independence.