Vaccinating Against Cholera in Guinea

A Promising Approach to Outbreak Response

More than 170,000 people in the Boffa region of Guinea recently became the first in Africa to receive a new two-dose oral vaccine for cholera. 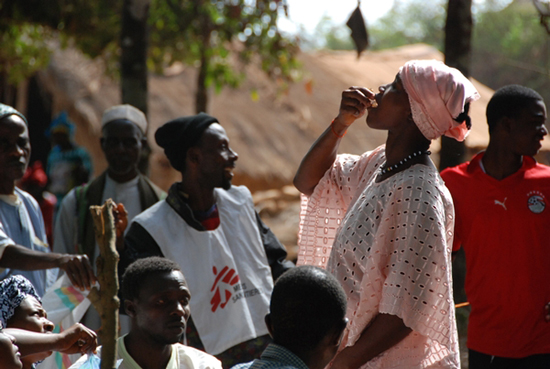 An MSF patient takes a dose of the new oral cholera vaccine in Guinea.

GENEVA, JUNE 1, 2012—More than 170,000 people in the Boffa region of Guinea recently became the first in Africa to receive a new two-dose oral vaccine for cholera, said the international medical humanitarian organization Doctors Without Borders/Médecins Sans Frontières (MSF), which led the vaccination campaign.

The initiative, MSF said, could spur an improved response to cholera epidemics worldwide. In collaboration with the Guinean Ministry of Health, MSF focused its response on Boffa, a coastal region near Conakry, which was considered a hotspot of the epidemic.

"We were faced with an outbreak and we wanted first to protect people by vaccinating them, and to limit the spread of cholera," said Dr. Dominique Legros, MSF’s innovation initiative manager in Geneva. "MSF is regularly involved in responding to cholera outbreaks and it is always difficult to control the disease. Because cholera evolves quickly, oral vaccination provides us with a new tool to try to contain [it]. If we can control the most active spots, we can reduce the spread of cholera."

Since the vaccination campaign, MSF and its partner Épicentre have strengthened epidemiological surveillance in the region in order to monitor the evolution of the epidemic and the efficacy of the vaccine over the next six months.

The results of this surveillance will be analyzed and used to develop a comprehensive global response strategy for future epidemics, which will enable MSF teams to deploy quickly to vaccinate communities and protect more people.

Oral cholera vaccination represents a promising new tool in the response to outbreaks, but it cannot be used alone. Awareness-raising activities, improved hygiene practices, and treatment are still important components of the cholera response. The provision of safe water and sanitation remain essential during all outbreaks.

"All water-born diseases can be controlled by investing in water and sanitation measures,” said Legros. “The oral vaccine against cholera is not a panacea for all diarrheal diseases in Africa."

MSF’s work in Guinea has shown that vaccination against cholera during an epidemic is possible. Teams require only basic training and the vaccine is easy to administer, causes few side effects, and is well accepted by the population.

From late April to mid-May 2012, MSF deployed 31 vaccination teams in Boffa, Tougnifily, and Koba. 68 percent of the target population—about 163,000 people—received two doses of the vaccine. This operation was conducted in collaboration with the Guinean Ministry of Health and health authorities present in the area.

In addition, MSF teams have just started to vaccinate another 50,000 people in the region Forecariah, south of the capital Conakry.

The cholera vaccine is approved by the World Health Organization (WHO) and is administered in two doses, with the second dose administered two to six weeks after the first. Efficacy is over 60 percent for at least two years. MSF has used the vaccine as a preventive measure in endemic countries, but this is the first time the vaccine was used in response to an outbreak in Africa.