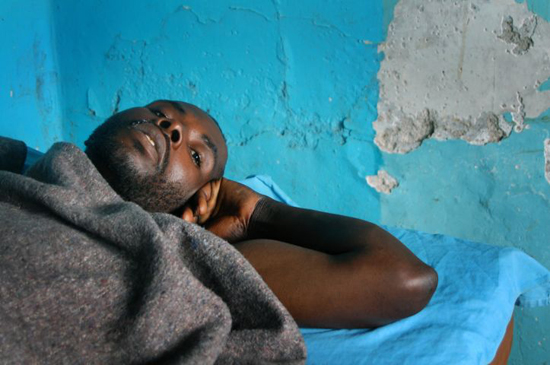 A patient recovers after surgery at Masisi hospital in North Kivu Province.

“They came during the night. We were sleeping. They entered the house. Then they tied us up. They wanted to kill us in my mother’s house. I tried to flee, but because I was bound, I fell to the ground, on my stomach. One of the men pointed his gun at my heart. To kill me.”

Charles’s* face is covered in sweat and his eyes are full of terror. The bullet didn’t strike his heart. It passed through his chest and came out through his shoulder. He was admitted in critical condition to Mweso hospital, in North Kivu Province, Democratic Republic of Congo. The MSF surgical team operated on him and today he is fine.

Charles is one of many civilians who carry wounds from the war in North Kivu. “The majority of the patients admitted for surgery are people who have been wounded due to violence,” says Dr. Jose Sanchez, MSF surgeon at Mweso hospital, in Masisi district. “We also have a maternity ward where we perform cesareans. Here, we receive both civilians and soldiers. Since the war resumed, we have seen an increase in wounds linked to violence, due to both bullets and knives.”

In the month of October, the MSF team in Mweso saw thousands of people fleeing along the road in front of the hospital. Fighting was raging in the areas to the north, right up to the edge of Mweso itself. In the operating room, the number of war-wounded patients increased dramatically.

“(In October), we performed 60 surgeries, of which around half were for wounds linked to the war, to the violence,” adds the doctor. “Many were civilians: men, women and children.”

Jerome was one of them. This elderly man does not know his precise age—“Somewhere around 70 years,” he says. Sitting on one of the surgical ward’s mattresses, he holds the stump at the end of his right arm. “It was at night. We were six in the house. Armed men entered and began shooting. That night, there were three deaths. And three wounded. I took a bullet in the forearm. The wound became infected and they had to amputate my right hand.”

Mweso hospital is the only reference facility for 40 kilometers (25 miles) in any direction. “It’s important for MSF to be present in the hospital, to support all the hospital services, and in particular to provide quality surgical care,” Dr. Jose Sanchez says.

Charles tries to move his arm, wrapped in a piece of gauze compress. “If by chance I am healed…” he confides, “I hope to return to school. The right hand, the one that writes, wasn’t harmed.”

* Names have been changed.