Voices from Congo: "We were caught right in the middle of heavy gunfire"

A testimony from a 16-year-old patient 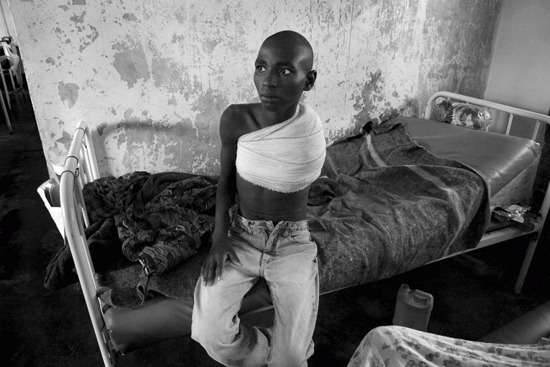 J., 16, had to have his left arm amputated after he was caught in the middle of the fighting in the Nyanzale area.

He's 16 years old and tells his story with a very hushed voice. J. is clearly still scared and shocked, probably not yet fully grasping what happened to him two weeks ago.

He and his ten-year-old brother were in the forest in the Nyanzale area when fighting broke out. "We were caught right in the middle of heavy gunfire. We were really scared and had nowhere to run. We were literally caught between two groups shooting at each other. Suddenly, there was a heavy blast just next to me. I fell and lost consciousness. When I woke up, my younger brother was screaming. He was fine, but was scared about what had happened to me. I felt a really heavy pain on my left arm and looked down to see that it was totally destroyed. My brother ran away."

J. walked out of the forest in the direction of the fighting. He saw armed men who couldn’t do anything for him. Local people arrived and took him to the MSF health center in Nyanzale. The MSF team transferred him by ambulance to Rutshuru hospital.

"When J. arrived at the hospital, he was in really bad shape,” says François, the MSF head of the surgical ward. “He had lost a lot of blood, was unconscious, and needed an operation right away. The surgeons tried to save his arm or part of it, but it wasn't possible. The bone was too damaged to be saved."

"When I woke up,” says J., “I was just scared and sad. I don't know what will happen now. My dad was killed when I was only a kid; my mom left the family to live with another man. I was supposed to take care of them, but now, with what happened to me, I really don't know how. Now, my sister is taking care of me in the hospital. I don’t even know if we can go back home."