Voices of the Displaced: Fleeing Violence in North Kivu, Congo

In displaced persons camps in Kibati, just north of Goma in the North Kivu province of the Democratic Republic of Congo, scores of people are seeking refuge from recent fighting. Here are just a few of their stories. 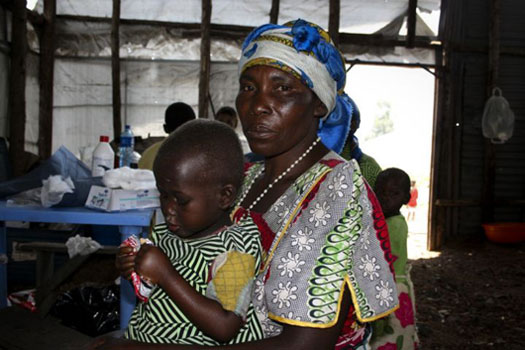 This girl is is six years old. Her feet are swollen. Mumuza Muhindo, an MSF nurse working with the mobile clinic in Kibati, diagnoses kwashiorkor, a severe form of malnutrition.

"We have given her ready-to-use therapeutic food so she gains strength quickly," explains Mumuza. "She will have to eat three ready-to-use food sachets a day on top of the family meal. You can see she is eating well for the moment so I am confident that she will be better soon. The main problem is that most people living in Kibati don't have the means to buy food as they fled the fighting."

She came with her mother, (pictured above on the right), and her 13-year-old brother straight from Rugari to Kibati, a 12 mile walk.

"I was at home on Monday when the fighting started again,” explained the 58-year-old mother. “I took what I could carry and my two children. We couldn't go to Kibumba as they were fighting there as well. I came straight to Kibati. I was living in a camp in Rugari after I fled the fighting one year ago. This is the second time I’ve fled. I am tired of this situation. I am alone with my two children. My husband died during fighting some eight years ago."

"In Rugari, in the camp I was living in, we didn't receive enough to eat. They gave me a food ration that was supposed to feed my entire family for one month, but after two weeks we barely had food left. And since Monday, we haven't eaten anything except some banana juice. I have no money and no work here."

This is the second time the girl has been treated for malnutrition. She was looked after at a nutritional centre in Rugari, where she received therapeutic milk. But the recent lack of food and the constant movement have worsened her condition.

She is one of the lucky ones who found a place to live in Kibati. She is sharing a small hut with other people. But most refugees who have arrived since Monday just sleep on the grass. 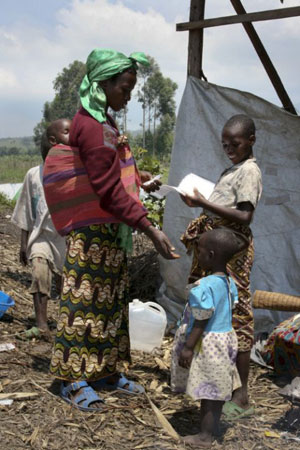 "I came to the mobile clinic because my daughter has been coughing for several days now. This is the second time in three months that I have had to run away from the fighting. I used to live near Rumangabo, but three months ago I had to flee, and have lived in a camp in Kibumba since. On Monday I had to leave Kibumba as they were fighting. I came by foot to Kibati."

This woman (pictured carrying a child on her back), 35 years old, has been in Kibati since Monday with her husband and her five children. She lives outside, on the grass, as she has not yet found shelter.

Her daughter (pictured at bottom right) received medication to treat her cough, but because she sleeps outside it may not improve quickly. "It's actually rather cold at night here and it rains nearly every day," explains Mumuza Muhindo, an MSF nurse working with the mobile clinic in Kibati. "She sleeps outside, has no blankets, no place to shelter. This might complicate her recovery. But she will come back in a few days, as we are here every day, and we will evaluate her condition again."

"We didn't manage to bring more than a couple of things,” said M. We had to abandon most of our belongings in Kibumba, and three months ago in Rumangabo. My husband has not found a job here and we have no money. My children have had barely anything to eat since Monday. They cry at night because they're hungry. It's a very difficult situation, especially for the younger ones. If it was safe to go back, I would leave Kibati tomorrow, but I don't dare leave now. What if the fighting starts again?"