"We Are Under Attack Almost Every Day": Medical Care in Besieged East Aleppo 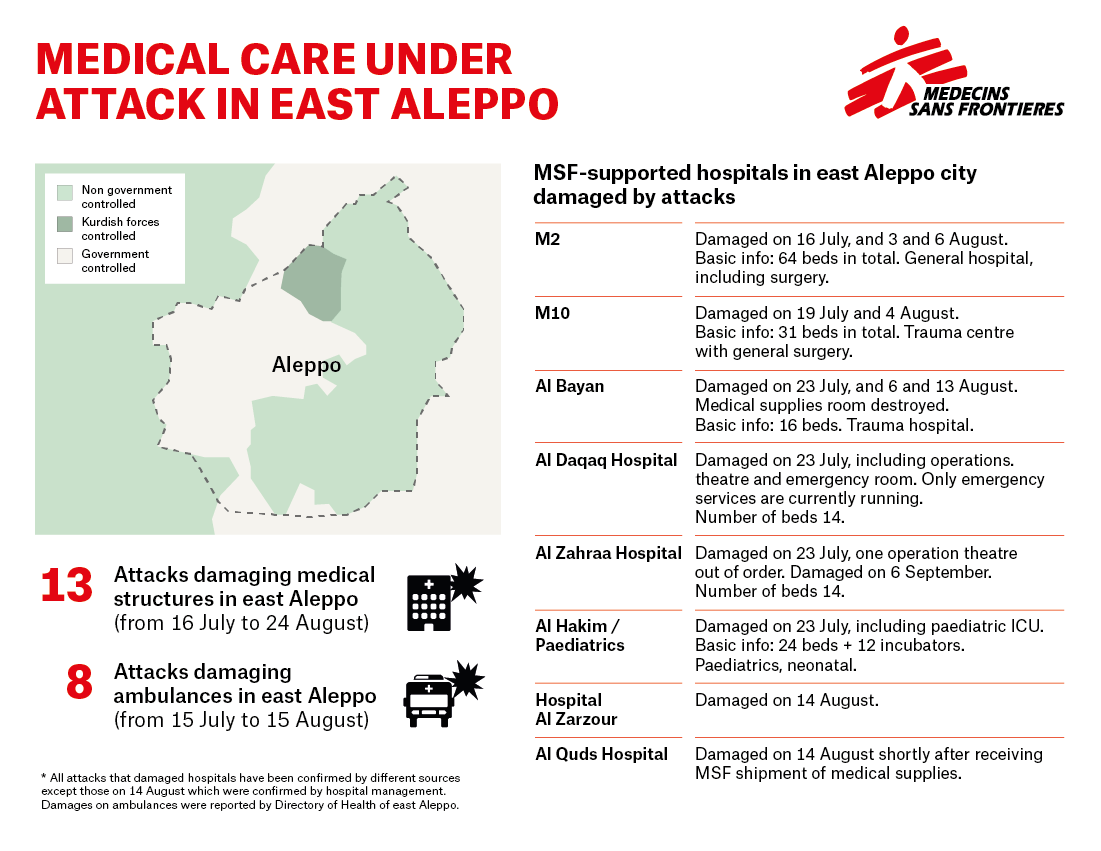 This past week, Al Zahraa Hospital became the latest medical facility to be damaged by an airstrike in besieged east Aleppo, where 250,000 people are now trapped in an increasingly unsustainable situation. The hospital was hit during a bombing on Tuesday evening and had to halt activities after doors, windows, and a generator were destroyed. Fortunately, there were no casualties.

Read More: "We Cannot Go and Leave Our People Behind"

"We are under attack almost every day," says physiotherapist Mustafa Karaman, a volunteer at a hospital supported by Doctors Without Borders/Médecins Sans Frontières (MSF) that was hit in August. "All health facilities in the city have been affected. We do what we can and we use what we have to provide care to people trapped in the city. In the city life has become almost impossible. We as medical staff cannot go and leave our people behind."

Since mid-July, all eight still-functioning hospitals in east Aleppo have been damaged at least once—and half of them more than once—in bombings and shelling that, with the last incident on September 6, amounts to 13 attacks overall. All of these hospitals receive MSF support. Damage usually means activities must be suspended in a besieged city where sick and wounded people simply cannot seek assistance elsewhere.

Some of these hospitals even had to be relocated after being rendered completely non-functional by attacks. Since renewed fighting began in Aleppo in July, the eastern non-government-controlled part of the city has become surrounded by hostile forces and cut off from supply routes, leaving an estimated 250,000 people trapped and struggling to survive.

Despite the siege, in recent days MSF was able to send a shipment with supplies—including drugs and lifesaving surgical kits and medical equipment—for the eight hospitals still functioning inside east, as it has done since 2014. However, there is no replacement for skilled health care providers. In east Aleppo neighborhoods, only a few dozen doctors and surgeons are left to care for hundreds of thousands of people in dire need. Syrian medical staff face an unknown future, with limited supplies, limited space, and no way to refer patients beyond the siege lines.

"All warring parties must understand their duty to respect the rules of war," says MSF Middle East program manager Pablo Marco. “They must stop bombing hospitals and civilian infrastructures; allow the severely sick and wounded to be evacuated; and not cut the supply of food, drugs, and vital goods into the city.”

MSF runs six medical facilities in northern Syria and supports more than 150 health centers and hospitals across the country, many of them in besieged areas.

Read More: Amid Repeated Bombings, “People Are Scared To Go to Hospitals” in Eastern Aleppo