The Will to Heal: Syrian Doctors-Turned-Refugees Working with MSF

Early in the morning, a crowd of Syrian refugees, mostly women and children, stand outside the Doctors Without Borders/Médecins Sans Frontières (MSF) clinic at the Kawargosk camp in northern Iraq, waiting to see a doctor who knows their situation all too well. Dr. Muhammed Selim is himself a refugee, someone who was forced from his home by the war in his country just as they were forced from theirs. He stayed behind as long as he could, trying to provide medical care for people injured by the fighting. But then it became, he says, "too dangerous," and he had to undertake the same journey as the patients he now treats.

He is a refugee who tends to his fellow refugees, and he is not the only one. At the health centers it runs in Kawargosk and Darashakran camps in northern Iraq, MSF relies on a host of skilled staff members who have crossed over from Syria as refugees. Nine Syrian doctors and 15 Syrian nurses, in fact, are employed at the two camps.

MSF and the patients it treats are benefiting from the work of such doctors in Iraq and in several other countries. Throughout its history, the organization has been bolstered by the efforts of professionals who were determined to keep working even after being displaced.

To commemorate World Refugee Day, which falls on June 20 this year, MSF is highlighting the stories, sacrifices, and contributions of three Syrian refugees working with us in Iraq. These are doctors who didn’t escape the fighting immediately, but tried to fulfil their medical duties in Syria until it was no longer possible, and who continue to contribute productively to their fellow refugees today. They were forced to flee, to leave behind much of their previous life and belongings, but they did not leave behind their medical mission. 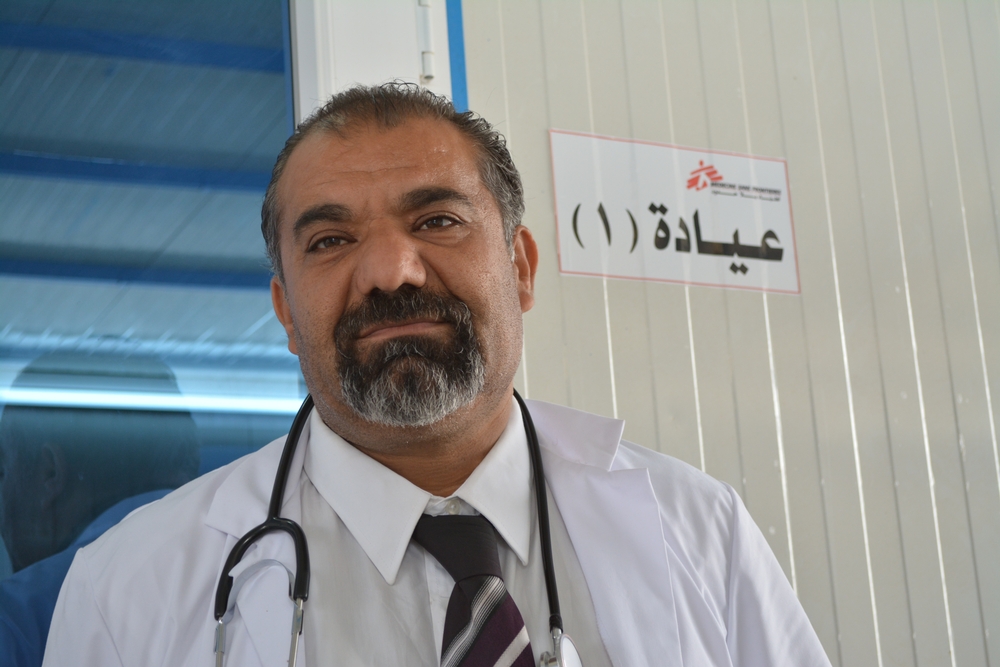 Selim, a general surgeon from Qamishli, had been working in Al-Safirah district, in Aleppo governorate, since 2006. He worked at a government hospital in the morning and at his private clinic in the evening.

“Before 2011, life was happy and work was good," he says. "I would work hard and after work I would enjoy visiting friends all around Aleppo.”

But when conflict started in rural Aleppo, Selim found himself and his clinic in the midst of battle: “My clinic was situated in the vicinity of three strategic positions which were being fought over by multiple groups. I was stuck for eight months, unable to leave my clinic for Aleppo or anywhere else, and there were snipers all around.

“When Al-Safirah was attacked with barrel bombs there were body parts and blood all over the streets. I would work into the night. Vegetable carts piled full of men, women, and children would arrive at my clinic, some with their hands gone, their legs gone, their eyes gone. We had very basic surgical capabilities, no general anesthetic, and we were just three doctors, myself and two pediatricians, but the neighbors were very helpful.”

With fighting continuing every day, there was a large exodus of people leaving Al-Safirah. Selim managed to escape with his life, under fire. “We escaped as the bombs were falling. That day, my clinic was hit and destroyed," he says.

“I retreated 12 kilometers [7.2 miles] away from the town and set up a small field hospital. Although we had a good supply of medicine and equipment, I was the only doctor. There were no nurses, only the youth among the neighbors helping. We worked hard, but there was fighting and kidnapping on the ground, and barrel bombs falling from the sky. We were caught between two fires.

“I promised myself to continue working and stay until the end. I was not fearing the planes, but I was the only Kurd in the area, and Kurds were being targeted.”

Selim decided to leave in January 2014, as the threat of kidnapping was becoming too great. And once again he left just in time: “The morning after I left, barrel bombs were dropped on the field hospital. The whole place was destroyed. The medicines in it would have been enough to equip a full hospital.”

He recalls a long and perilous journey through Ar-Raqqah and Al-Hasakah, passing numerous checkpoints at which he had to hide his Kurdish identity, until he reached the town of Qamishli. From there, he tried to cross the border to Iraq three times, but it was closed. He had to endure an 11-hour journey on foot through mountains and valleys from Qamishli to another part of the border, where he was finally able to leave Syria.

After settling in Darashakran refugee camp, Muhammed was struggling to continue practicing as a doctor. He worked as a painter for two weeks in the camp. Then one day, while walking in the camp feeling depressed, things changed for him. “I had lost hope. I was thinking about my next painting job when I came across some MSF expat staff in the camp by chance. They told me there was an opening in Kawargosk camp and that I could apply. I had heard about MSF before, and had dreamt of working with them in the past.”

After a written test and interview, Muhammed began work as a general doctor for MSF in Kawargosk camp. “Work is good,” he says. “I’m very happy to be working in my field, with all my energy. The people here are happy with our service, especially that I share their language and dialect. I know about their suffering and their way of thinking. Sometimes the only treatment they need is through words, not drugs.”

Muhammed still lives in Darashakran camp, commuting every day to Kawargosk camp, ten kilometers [6.2 miles] away. Despite escaping with his life on two occasions, and continuing to provide medical care to his fellow Syrian refugees, Muhammed still struggles with his conscience. “Even till this moment I have feelings of guilt that I left Syria. Working with MSF here is some consolation, but sometimes I tell myself that I should have served my people better and stayed even if I was killed. Maybe I could have fulfilled my duty better.

“My wish is for the crisis to be solved as soon as possible and for the people to return home.” 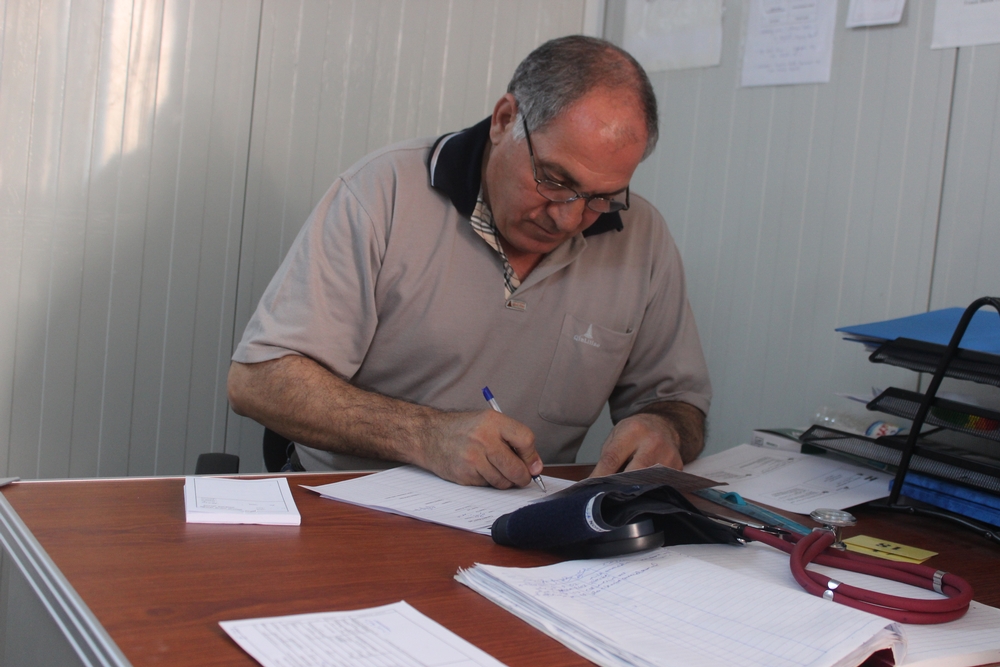 Dr. Hamza Issa is a general doctor from Qamishli in Northern Syria. He was working at a health center in rural Al-Hasakah in 2012 when it was attacked and ransacked by an armed group who told him he could no longer provide his medical services.

“We tried to continue working despite the escalation of fighting between the different groups,” he says, “and we tried to tell the groups who attacked us that we had sworn a medical oath which obliged us to treat all patients, but it made no difference. The threats continued and we were arrested and interrogated several times.”

Determined to keep working, Issa moved to the town of Al-Qahtaniyah, where he resumed his work at a clinic, but the situation was not much better.

“There was a wave of doctors fleeing for their safety. I was one of just two doctors remaining in the town, and the pressure on us increased as we tried to help large numbers of wounded.”

Medical staff in the area were still under threat, and after someone informed Issa that his name was on a list of targets, he decided to leave, “having tried to stay to the final breath.”

He left Syria on New Year’s Eve 2013, to start 2014 in Iraq. He had heard of MSF and got in touch through the internet. He has worked with MSF since the opening of the project in Darashakran.

“As Syrian Kurdish doctors it is easier for us to communicate with the patients. The most important thing for us is to provide a high-quality level of care from one Syrian refugee to another.” 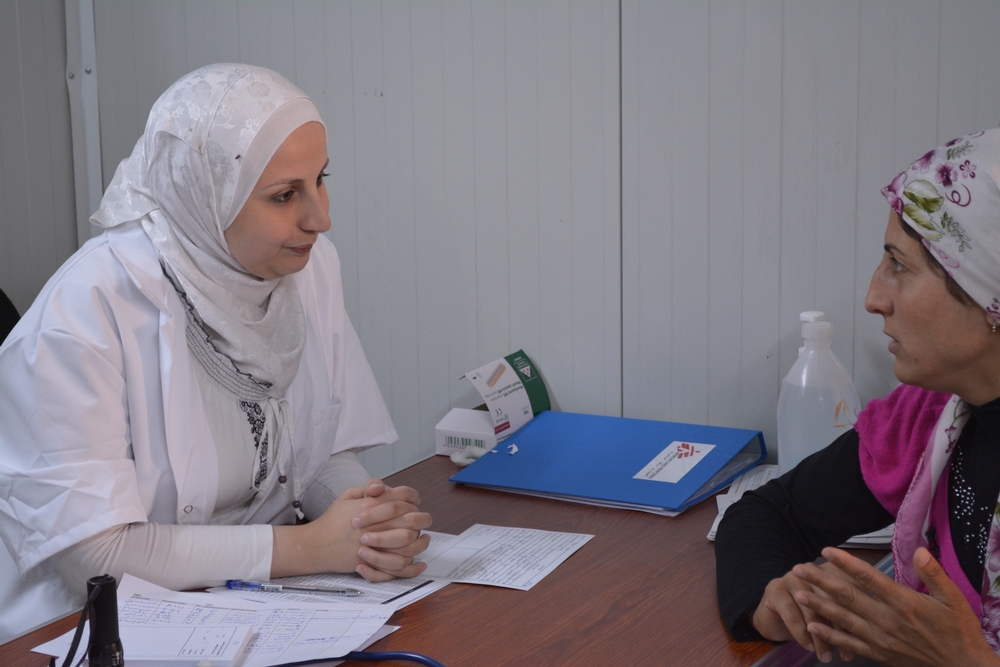 Having graduated from Damascus University in 2009, Dr. Media Rasheed was in her fourth year of specialization in hematology when she had to stop and leave the country.

Rasheed’s family had already fled Damascus, while she had stayed behind, determined to complete her training. But her family convinced her that there was credible danger to her life and safety if she stayed, and so she left for Erbil in June 2013.

After looking for work for six months, Rasheed started working for MSF as a general doctor, first in Kawargosk camp and then in Darashakran camp, where she sees around 50 patients per day.

“As a Syrian doctor working in a Syrian refugee camp, my relationship with the patients is not limited to being a doctor. Some patients just want to talk. I listen to their stories of suffering and feel their pain, especially those escaping the conflict in rural Damascus and Aleppo. One of the stories that affected me the most was of a Syrian lady who lost her husband after heavy shelling in Aleppo, and didn’t have the opportunity to say goodbye or bury him before fleeing.

“Before the conflict started in 2011, I had heard a lot about MSF. I remember when I was at school with my friends, we dreamed of working for MSF in Africa after graduating, and seeing the world. But never for one moment did I imagine I’d work for MSF treating Syrian refugees!

“I often feel guilty for leaving my country, as we doctors have pledged not [to] leave at times of war, but the security situation left us no choice. The day the war ends I will return to Syria.”

There are currently over 225,000 Syrian refugees in Iraq, the vast majority of whom are in the autonomous region of Kurdistan. In Erbil province, which hosts around 90,000 of these refugees, MSF opened projects in Kawargosk camp in September 2013, and Darashakran camp in March 2014, providing primary healthcare and mental health services. So far, over 50,000 consultations have been conducted.

MSF also works in Dohuk province, which hosts over 100,000 refugees, providing primary health care and mental health and reproductive health services in Domeez camp, where it has conducted over 200,000 consultations. Meanwhile, the needs in the area are growing further, with the influx of internally displaced people to Kurdistan from other parts of Iraq following the recent escalation of violence. MSF is conducting mobile clinics to provide medical care, and is exploring additional ways of supporting the displaced populations.