In the north of Yemen, intense fighting has been ongoing for the past eight weeks. Since September 2007, MSF has worked in Saada governorate in northern Yemen. MSF staff currently provide medical care to the population affected by the 'Sixth War', the most recent of a series of violent outbreaks that began in 2004 between government forces and members of the opposition group Al Houthi. Andrés Romero, MSF’s head of mission in Yemen's capital, Sana'a, describes the evolution of MSF’s activities in the area. 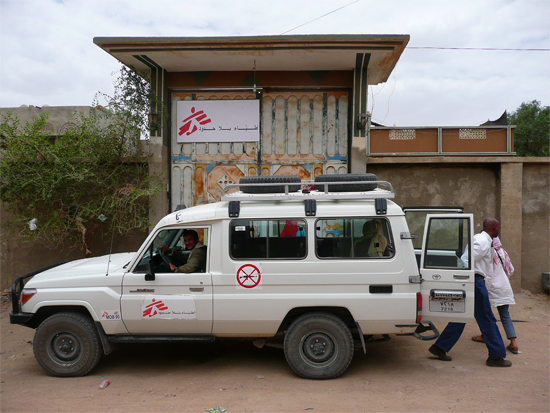 An MSF vehicle parks outside an MSF facility in Al Tahl.

In the north of Yemen intense fighting has been ongoing for the past eight weeks. Since September 2007, Doctors Without Borders/Médecins Sans Frontières (MSF) has worked in Saada governorate in northern Yemen. MSF staff currently provide medical care to the population affected by the 'Sixth War', the most recent of a series of violent outbreaks that began in 2004 between government forces and members of the opposition group Al Houthi. Andrés Romero, MSF’s head of mission in Sana'a, describes the evolution of MSF’s activities here

How have MSF’s activities evolved in northern Yemen?

After the 'Sixth War' started in August 2009, MSF also began to provide assistance to displaced populations in Mandabah area, north of Saada governorate. A water supply system was created to provide drinking water for around 250 families.

During the past two months of intense fighting, running all of these activities has become increasingly complex, despite the authorizations that we have from both sides of the conflict. We had to temporarily stop surgical activities in Al Talh and we have reduced the support we provide to primary health structures. Also, we had to delay the beginning of medical activities in Mandabah area. However in Razeh, consultations and hospitalizations are ongoing and our teams perform around 560 emergency consultations per month. An MSF surgical team will soon reinforce this hospital.

How would you describe the primary needs of the people in Saada governorate today?

The continuous fighting has forced large amounts of people to flee repeatedly inside the governorate or towards neighboring governorates. It has been difficult to obtain precise figures on the overall number of displaced as rescue teams and humanitarian actors have difficulties reaching all areas of the governorate. However, according to United Nations figures, around 60,000 displaced people have so far been registered in Saada, Amran, and Hajja governorates.

In addition, families are still on the move, travelling from one location to another in fear for their safety. For example, in the north of the governorate some families were displaced from Dahyan towards Jesnem, then from Jesmen towards Baqim, and then from Baqim towards Mandabah. But even in Mandabah, finding a safe place was extremely difficult as clashes erupted there and families were scattered once again.

In Mandabah, our teams had assessed the situation of around 3,000 people, mostly living in precarious conditions, with poor access to water and lack of basic items such as blankets, cooking equipment, etc. Food has also become a serious concern as difficulties in supply made food prices rise by almost four times. As other actors are focusing on the distribution of food and non-food items the objective for MSF is to provide medical care for the population of this area.

Health care access in the governorate is definitely an issue, as most health structures are not functioning anymore and others are very difficult to access for the population. It remains difficult to estimate the number of civilian casualties. Between August 11 and September 22, in Al Talh hospital MSF carried out 195 surgical interventions, of which 135 were for war-related cases. Afterwards, surgical activities had to be interrupted in Al Talh hospital. MSF is working with the Yemeni Minister of Health in order to restart these activities as soon as possible.

How has MSF continued its activities in such difficult security conditions?

It has been a daily challenge considering that we faced numerous problems, namely insecurity and lack of communication. All land and wireless telephones have been unreliable. Roads linking Saada governorate with the rest of the country have been blocked. MSF national staff are often working in hospitals without contact with their families.

MSF adapted to the situation by sending medical supplies and human resources, notably a surgical team, through Saudi Arabia, and following up very closely the evolution of the context. All actors in this conflict understand MSF's principles of neutrality and impartiality. As a result in Razeh and Al-Talh, we managed to treat any person in medical need—including war-wounded cases—regardless of their political affiliation.

Between January and July 2009, in Saada governorate, MSF teams carried out 30,000 consultations of which 8,000 were for emergencies, and 1,450 hospitalizations. MSF also performed 720 surgical procedures, approximately 100 of them for war-wounded.