An MSF nurse is standing in the middle of dozens of cholera patients lying on the dirt in the backyard of Beitbridge’s main hospital. Cholera has overwhelmed this border town of about 40,000 like contaminated wildfire. 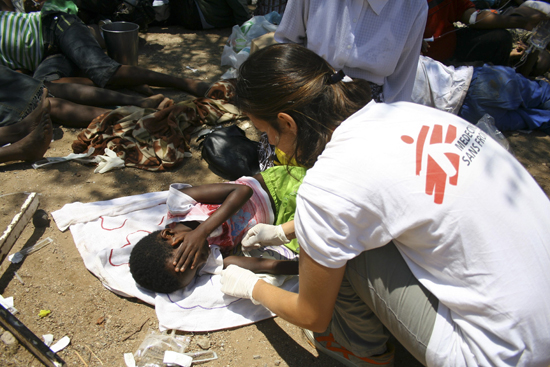 An MSF aid worker treats a cholera patient in Beitbridge, on the border with South Africa.

“I am feeling a little uncomfortable,” Henry, a middle-aged gentleman, says quietly as he looks up at Clara from where he is lying on the dirty floor. Henry is so dehydrated his cheeks are completely sunken and his eyes stand out from his closely cropped skull. Clara Chamizo, a nurse on her first MSF assignment in Beitbridge, Zimbabwe, sees the extreme absurdity of this statement. She is standing in the middle of dozens of cholera patients lying on the dirt in the backyard of Beitbridge’s main hospital. Cholera has overwhelmed this border town of about 40,000 like contaminated wildfire.

“Normally, cholera starts with a few cases and then we have the peak after a few weeks,” says Luis María Tello, the MSF Emergency Coordinator who arrived a few days after the first cases were reported and is surprised to see such high numbers now. Though research still needs to be done, Luis’s theory right now is that “a lot of people got cholera from the same source at the same time.”

On Friday, November 14, when the Zimbabwean Health Authorities in Beitbridge first reported cholera to MSF, there were five cases. Two days later, there were already more than 500; by the end of the week, there were more than 1,500. 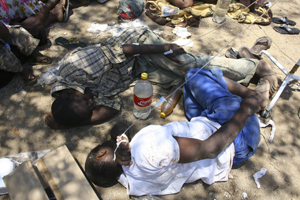 Cholera patients are treated on the ground at the main hospital in Beitbridge, which was overwhelmed with patients.

Patients were first placed inside Beitbridge’s main hospital, most lying on the cement floors, in very poor hygienic conditions. There is a lack of cleaning personnel as well as proper gear, chemicals, and water, not to mention all the hospital toilets have been blocked up for a long time.

On Sunday morning, the hospital had to make the decision to put all the patients out behind the buildings, on the dirt, so that body excretions could be absorbed into the ground. The sight was appalling: patients lying in the dust in the scorching heat; all asking for the life-saving drip (Ringer lactate IV fluid). There wasn’t even any water to give them, since the hospital, as everywhere in town, has its water supply cut on most days.

Clara and Veronica Nicola, the MSF doctor who is also the project coordinator at the Beitbridge project, were the only MSF expatriates in town when the emergency hit. Veronica, an Argentinean pediatrician who has been on several MSF missions, says she never has had to insert so many catheters in one day in her life.

“For me, the hardest thing was to be able to concentrate on one person,” said Veronica. “There was a man lying next to one of the trolleys under the sun. By the time I got to him, he was in shock. We tried to get a vein, like, ten times, but then he started gasping and he died right there in front of our eyes.” She pauses for a minute and then adds, “If I had seen him half an hour before, we might have been able to do something about it, but there were so many people lying there, people calling you. But still,” she adds thoughtfully, “we could have done something.” In her calm manner she summarizes, “It was very bad.”

At the beginning of the crisis, the Beitbridge hospital did not have any IV fluid or oral rehydration salts (ORS) tablets in stock. MSF shipped over 800 liters of the Ringer’s fluid the first day of the intervention and since then there has been a continuous supply. Shipments of medical and logistical supplies arrived over ten days. A team of 16 expatriates, comprised of doctors, nurses, logisticians, and administrators were sent to Beitbridge. And more than 100 additional health workers, cleaners, and day workers have been hired locally.

In three days, a cholera treatment center (CTC) with 130 cholera beds—those with a hole in the middle under which a bucket is placed so that the diarrhea is released directly in the container—was set up.

Once the cholera bacteria enters the body, it releases a toxin which causes part of the intestines to suck all the water from the body. The intestines, unable to handle so much water, rejects it. The only thing that can be done is to give the body enough fluids to survive until the bacteria’s own life cycle expires, usually in about five days. If a person does not receive enough fluids, he or she can die within hours of contagion.

The only real way to prevent cholera is to have good hygiene and clean water. From the second day of the outbreak, an MSF car with two officers from the Zimbabwean Environmental Health Office (HEO) was dedicated to going around town, giving out information to the public on how to avoid getting cholera. 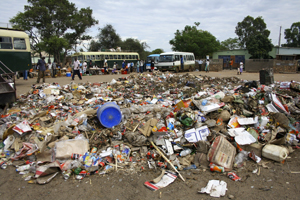 The poor water and sanitation conditions in Beitbridge make it easier for the cholera bacteria to spread.

The town of Beitbridge is a shifting tide of migrants, truckers, sex workers, unaccompanied children, and desperate people trying to find a better life – mostly by attempting to cross the border into South Africa. With the current economic crises in Zimbabwe, basic services are lacking and especially so in a town with such uncontrolled growth. There is trash everywhere, and open sewage runs through most of Beitbridge’s streets. Almost everyday there are cuts in the water and power supplies.

As the MSF car moved slowly through the neighborhoods and the Zimbabwean EHOs tried to give their speeches through a loudspeaker, angry crowds would gather to shout, “How do you expect us to control cholera when there is no water!” and “Look at this sewage running here right next to us,” “Why don’t you clean up the garbage in the streets?”

On the main highway, which transverses Beitbridge, there is an area where all the truckers stop on their way to cross over the border. Sometimes it can take days to clear the paperwork to cross, so they camp here, together with passengers or relatives. When the MSF car stopped there, the truckers gathered around and were just as angry as local residents. They showed some cesspools where they come to wash their hands and pointed out a dusty field next to them, covered in human excrement. “Where are we supposed to go?” pleaded one man.

These problems are long-term. The water station doesn’t have the parts to properly repair its pumps. Even if it did, it depends on electricity to be able to pump water from the water tower to the city. Electricity depends on a coal mine that hasn’t been paid in over a year and can no longer supply coal. Then, there is no fuel to run the garbage trucks and there is no money to pay salaries for people to collect the garbage. There are no equipment or supplies to fix the sewage system, and no money to pay personnel to do it. MSF is working on meeting the emergency needs in the short-term, but real solutions are needed to prevent future outbreaks.