As of January 7, MSF has seen more than 16,000 patients with suspected cases of cholera in Zimbabwe. Currently, MSF teams are seeing an overall decrease in the number of cases at the projects where they are working. However, the UN has reported a major spike in cases – on January 6 1,080 new cases and 19 deaths were reported while January 5 saw 675 new cases and 59 deaths. 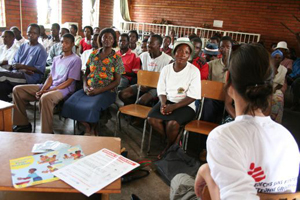 Patients wait to be seen at an MSF cholera project in Chegutu, west of Harare.

As of January 7, Doctors Without Borders/Médecins Sans Frontières (MSF) has seen more than 16,000 patients with suspected cases of cholera in Zimbabwe.

Currently, MSF teams are seeing an overall decrease in the number of cases at the projects where they are working. However, the UN has reported a major spike in cases – on January 6, 1,080 new cases and 19 deaths were reported while January 5 saw 675 new cases and 59 deaths.

A likely explanation for the discrepancy between UN figures and MSF reports is that the cholera outbreak has spread throughout the entire country – all ten provinces are reporting cases – and since more organizations are now treating patients on the ground, there are more cases being reported. Importantly, however, MSF is continuing to see new cases of cholera and is finding new areas of concern.

There is a clear shift from the bigger cities to district towns, smaller towns, and rural areas. This makes the management of cases more challenging, as resources need to be widely dispersed and logistics are more difficult.

The rainy season is in full swing in most areas, which adds additional complications.

MSF mobile teams will continue to provide rapid assistance to Ministry of Health facilities and will focus on sites with more than 10 cases per day. A focus will also continue on case management and better surveillance.

The number of patients in the Harare cholera treatment senters (CTCs) remain high, but the number of cases MSF is seeing is decreasing and the overall situation is stabilizing. Fewer than 50 new cases are being seen by MSF per day. Some prisons in Harare are experiencing a significant number of cases with a case fatality rate of 14 percent, however; MSF and the International Committee for the Red Cross (ICRC) are in contact with prison authorities.

The vast majority of cases in Harare still come from the same four high-density suburbs of Budiriro, Glen View, Mbare, and Glen Norah. The number of cases from other suburbs is increasing, however, including Mabvuku and Tafara, Rugare, Waterfalls and Hopely Farm. There is an agreement to open a CTC at Hopely Farm.

The situation in Masvingo and Manicaland is calm and the number of cases is still decreasing, but there are still some areas with new cases. Mutare and Masvingo cities remain areas of concern.

In Glendale, Mashonland Central, the water situation is precarious and there is concern that if nothing is done another large scale outbreak, such as the one that hit Chegutu in mid-December, could occur. MSF will carry out an assessment in Mashonland Central this week.

The number of cases in Chegutu overall is going down quickly, but a recent increase in the last few days can be explained by increased movement during the Christmas and New Year's holidays, ongoing rains, continued poor sanitation, and by the re-opening of some water pipes where people are starting to collect water, which is not necessarily potable.

The number of cases in Bulawayo continues to decrease, but the sewage system remains blocked.

Sixteen cases were reported by WHO in Matabeleland North. Cases have also been reported near Victoria Falls, Zambia. An outreach team will assess these areas.