Zimbabweans Struggle in the Shadows of South African Society

Some 3 million Zimbabweans have fled their country for South Africa, but few have found sanctuary 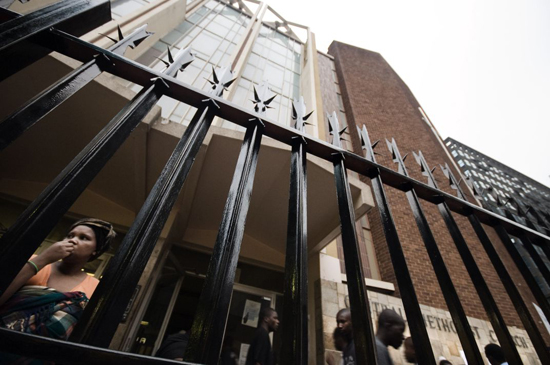 Zimbabweans who have come to South Africa seek shelter at the Central Methodist Church in Johannesburg.

A spiked iron gate stands between Zimbabweans and the relative safety they’ve found at the Central Methodist Church in downtown Johannesburg.

The owner of a pedestrian street running alongside the church installed the gate to prevent people from sleeping on his store-lined property at night. As a result, many of the 2,000 or so who could not fit inside the church began sleeping across the street, in front of the city's High Court buildings.

They know this is dangerous. One night in February, Zimbabweans sleeping there were descended upon by a group of 30 police and 100 private security personnel brandishing sticks; some were arrested—all were harassed and intimidated.

"Staying in Zimbabwe—it's not an option..."

Despite the fact that many Zimbabweans risk their lives to flee Zimbabwe, the South African government has historically characterized them as ‘voluntary economic migrants’ and aggressively deported them. Until recently, approximately 17,000 Zimbabweans were deported each month by South African authorities, according to United Nations and South African Department of Home Affairs figures.

But, Zimbabweans say they had little choice but to leave and despite claims that Zimbabwe is improving, thousands continue to cross the border every day, legally and illegally, as a matter of survival.

“You are forced to come to South Africa just to eat. Here, if you can get a job at least you can survive. But in Zimbabwe, going to work or not going to work it’s the same. So going back is not an option. We are forced to stay here until things normalize,” said John*, a 25-year-old Zimbabwean living in Johannesburg. 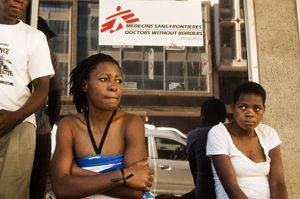 Patients wait outside the MSF clinic next to Central Methodist Church.

Others come to South Africa for medical care, which is increasingly hard to get in Zimbabwe. Natalie*, 23, crossed the border alone, 8 months pregnant. She said in Zimbabwe the hospital required her to go buy all of the items needed to deliver her baby, as well as pay an entrance fee and a fee for the delivery. “If you are going to have a normal birth they charge you 1,500 Rands (US$160) and if it is a C-section, you have to pay 4,500 Rands (US$475). That’s why I came here—I couldn’t get the money,” she said.

Listen to Natalie*, 23, staying in a women’s shelter in Musina.

"The problem in Zimbabwe for me is the way they treat pregnant women..."

Since 2007, Doctors Without Borders/Médecins Sans Frontières (MSF) has run a primary health care clinic in inner-city Johannesburg located next to the Central Methodist Church, and operated mobile health clinics in Musina, 18 kilometers (10 miles) from the Zimbabwean border.

In Musina and Johannesburg, MSF medical teams provide primary care and refer patients to hospitals and clinics to receive secondary care. Many patients have upper respiratory infections, often a result of sleeping outside; sexually transmitted diseases, including HIV; general body pains often related to the trauma and stress they have endured; serious injuries, often from rape and sexual assault, and gastro-intestinal and diarrheal diseases, including cholera. MSF provides HIV and TB tests—one in every five people in Zimbabwe is living with HIV, and due to the failing health system there, some cannot get their antiretroviral (ARV) medication. 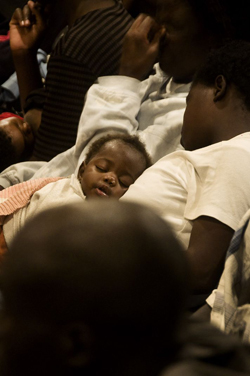 A mother and child sleep in a pew in Central Methodist Church.

In theory, foreign nationals in South Africa are entitled to health care at a low, universal rate. However, that provision is not always honored. In fact, many Zimbabwean patients have reported being either turned away completely, charged exorbitant fees, or experiencing xenophobic abuse at health facilities.

“Some patients who do not have referrals from MSF have problems at the hospitals. They are not attended to. They are asked a lot of questions and asked for a lot of money—at one hospital they used to ask Zimbabweans for 1,800 Rands (US$190) for a consultation. So most patients would come back to us and we would go with them. When I accompany patients, MSF pays only 40 Rands (US$4) for a consultation, same as a South African pays,” said Mary*, a social assistant at the MSF clinic in Johannesburg.

Another problem is that sometimes patients are scared to seek help at a secondary health facility, said Bianca Tolboom, a nurse and MSF's project coordinator in Johannesburg, due to fear of arrest or because of a lack of knowledge about their rights. 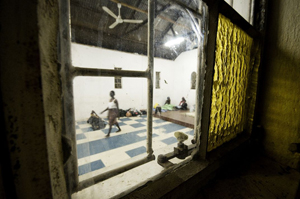 A church with no furniture functions as a women's shelter in Musina.

Every day, thousands of Zimbabweans flee their country for the chance to survive in South Africa, only to find their troubles are just beginning, and their suffering continues. Bandits at the border who rob, beat and rape; an absence of protection and humanitarian assistance from the State and United Nations agencies; and incidents of xenophobic violence, police harassment, and other forms of abuse of vulnerable people make South Africa a minefield for recent arrivals.

“First of all, the challenge is crossing the border. People often talk about attacks by crocodiles, being robbed by guma-gumas, which are the bandits that patrol around the river. The women and even men are often raped. So they go through a lot of trauma just by passing over the border. Once they come here, they are scared, they are traumatized and still they receive very little assistance,” said Sara Hjalmarsson, a nurse and project coordinator in Musina where MSF runs mobile clinics providing primary health care and counseling where Zimbabweans seek shelter.

Listen to Shara*, 18, at a women's shelter in Musina after she was raped by a man who helped get her a job.

Currently, many Zimbabweans in and around Musina are sleeping in shelters provided by churches and at farms where some receive a place to stay in exchange for work. However, these shelters are inadequate and often completely overcrowded, but there is little else available.

Others seek refuge along the railroad and in the surrounding bush. Some 3,000 to 4,000 people had previously been staying at the Musina Showgrounds, an open dirt lot where cultural events used to be held, and where a Department of Home Affairs office was established to process Zimbabweans’ asylum applications. Once that office was established, thousands of Zimbabweans previously in hiding flocked to seek asylum.The number of people queuing at the Showground to obtain their papers, coupled with major bottlenecks in the asylum-seeking process, meant people often had to stay there for weeks, resulting in significant needs for basic shelter and other services. There were no water or sanitation facilities until MSF and other agencies provided basic water points, toilets, and a drainage system.

In early March 2009, the authorities forced the occupants to disperse, insisting they burn their temporary shelters. Fearing deportation, people fled in all directions, and MSF has never been able to account for all its former patients. Today, people are no longer allowed to sleep at the Showground. If they do so, they are either chased away or detained by the police. 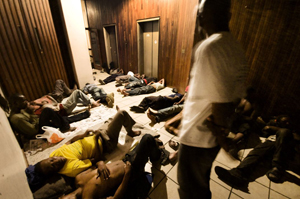 People bed down for the night in a hallway of the Central Methodist Church.

In Johannesburg, about 4,000 Zimbabweans were sleeping in or outside the Central Methodist Church during March and April, a period that saw significant increases in the number of Zimbabweans seeking refuge there. Since every available space is taken up inside, about half must sleep on the sidewalks outside, as close to the building as possible. As of now, this is the only place in Johannesburg offering them shelter, and it’s the only place many feel safe from detention and harassment. But even this modicum of safety is not guaranteed.

After a violent raid on the church in January 2008, more than 300 people without asylum-seeking papers were kept in jail for a week, many with severe medical needs. A year later, those sleeping on the sidewalk in front of the High Court were raided. And in March 2009, some 1,000 Zimbabweans were pushed farther from the church again after the installation of a high iron gate.

“The church is absolutely not ideal, but it’s the only place where people can find a little bit of protection. And this protection is now being taken away from them,” said Tolboom.

Among the would-be refugees at Central Methodist Church are a large number of unaccompanied minors. As of May 2009 there were 150 children, from the ages of seven to 18, staying at the church.  Many are orphans who crossed the border alone or with friends; some have families at home struggling to survive. Children are extremely vulnerable in this context—with no papers, no protection, and no money, they can easily become the victims of abuse and crime.

Listen to Rose*, 15, an orphan staying at Central Methodist Church.

"One of the hardest things I am experiencing here is the kind of people I am mixing with..."

Fifteen-year-old Rose*, who is living at the Central Methodist Church, explains: “I can’t even come freely from school without people harassing me, especially the men. Some of our fellow pupils are being forced into prostitution because of those same adults. We are protected here at the church, but not to the fullest. Because even if you don’t want to do anything wrong, you’ll find yourself doing the opposite.”

MSF runs a mentorship program for these children in an attempt to find out their histories, provide psycho-social support, and provide adult guidance and supervision as much as possible. But many of them have already been affected by their experiences, says Shelter Mushipe, an MSF counselor. “Through their journey, some have been exploited. Some have been raped. A 12-year-old was raped. She got an infection, and her behavior completely changed. Once something like that happens to a child you fear for another abuse. We fear for child pornography; for boys we hear they are getting into these gangs. I’m afraid of the type of society we are raising.”

These positive policy steps are welcome news if implemented appropriately, says MSF head of mission in South Africa, Rachel Cohen. However, as of June 2, these policies are yet to translate into significant changes on the ground for the majority of Zimbabweans. Neglect, abuse, harassment and a lack of adequate shelter and access to healthcare continue. "Until these new measures are implemented in a way that gives full consideration to the specific humanitarian needs of Zimbabweans in this country," says Cohen, "they will continue to suffer as they have: essentially, in the shadows of South African society.”

In Musina, 25 MSF staff run mobile clinics that provide primary health care and counseling and make referrals, and MSF provides support to shelters; in Johannesburg, about 35 MSF staff run a primary health care clinic and provide referrals and counseling. In Cape Town, MSF has been providing HIV/AIDS treatment in the township of Khayelitsha in partnership with the Western Cape Province Department of Health since 2001. MSF also has a 24 hour-a-day, seven days a week clinic for survivors of sexual violence in Khayelitsha, which will soon be handed over to a local South African organization.

* Names have been changed to protect the speakers’ identities.