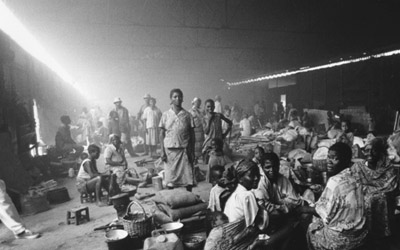 The warring parties in the Angolan civil war are turning blind eyes to the obvious, serious, and often acute humanitarian needs of the Angolan people. Both the government and the UNITA rebel movement are guilty of this negligence. The medical and nutritional emergencies that Doctors Without Borders/Médecins Sans Frontières (MSF) encounters due to its projects in the field are not just a logical consequence of the ongoing war. To a large extent, they are caused by the near total neglect towards populations, a disrespect for international humanitarian law, and the military strategies of the parties to the conflict.

The underlying causes for the emergencies include:

Evidence From Localities in Crisis

The most obvious examples of areas of concern are the towns of Cuemba, in Bié province, and Mussende, in Cuanza Sul province. Both are pockets of areas under government control, while the surrounding areas remain very unstable.

People abandon their homes and fields in compliance with government counter-UNITA tactics of removing people from the rural areas. Populations also flee violent oppression and destruction, or theft of harvests, primarily but not only by UNITA1. UNITA forces effectively prevent people from returning to their fields to gather food, attacking them - punishing them for having "chosen" the government side - or laying mines on paths to fields. Once crowded into government-controlled cities and towns that are inaccessible to aid organizations, people rely on the civil and military authorities for essential food or medical assistance. However, these are not forthcoming.

Many of the people coming from Cuemba are originally from the Andulo and Bailundo regions and were forced to follow UNITA when those areas came under government control by late 1999. Unfortunately, when the people later were forced to move to areas under government control, such as Cuemba, it did not put a final end to their long journey as they had again to flee malnutrition and diseases. Basically, they have been living for years on the move, and have been displaced multiple times as a result of both military strategies and wilful neglect by the parties.

Since early April 2001, over 5,000 ill and malnourished people have had to make a desperate and dangerous journey from Cuemba to the town of Camacupa (also in Bié province) in search of humanitarian assistance. Many arrive there in a state where they need to be urgently referred to Kuito (Bié province) for medical treatment in MSF's programs (for figures, see below). Further North, along the border between Malange and Cuanza Sul provinces, thousands more people are making a similar journey, fleeing from emergency conditions in Mussende to Cangandala, where many need admission to MSF's therapeutic feeding center (TFC).

Lack of secure access makes it impossible to accurately assess the urgency of medical needs in municipalities like Mussende, Cuemba, and parts of Camacupa. Still, all indications point to very severe nutritional and health crises in these areas. Levels of malnutrition and mortality must be among the highest seen in Angola over the past years:

In addition to these statistics, newly arrived IDPs tell consistent stories: they flee Mussende and Cuemba because the living conditions are unbearable. Put simply, there is no, or insufficient, food or medicine, and many people are dying, especially children. Their journeys are difficult and perilous, as they walk for days without protection (Cuemba to Camacupa - 80 km; Mussende to Cangandala - 100 km). IDPs arriving in Camacupa routinely recount that others, too weak to make it, died along the long road. These IDPs also tell us that many more people remain behind in Mussende and Cuemba.

"In Mussende, lots of people are dying of sickness, vomiting, diarrhea, and swelling... I was sick and had no family. I could not go to the lavras [fields] because UNITA had laid new mines to stop the people from returning to the fields to collect food. My niece had her leg blown off from a mine ... while trying to collect food." — 41-year-old IDP from Mussende

MSF is worried that these cases are not isolated, but an indication of an emerging humanitarian crisis in many Angolan localities beyond the tight security perimeters that limit the reach of international humanitarian aid, and sometimes the civilian government itself. Cuemba, Camacupa and Mussende are seemingly just a few dramatic examples of what MSF believes is a pattern repeated throughout the war-torn provinces of Angola. MSF volunteers hear, but are unable to verify, reports from IDPs that similar suffering exists in other areas under government control yet are beyond our access (e.g., Massango, in Malange province, and Luando, in Bié).4

Failure of the Government to Respond to the Emergencies

Faced with these towering malnutrition and mortality rates, the government of Angola clearly fails to provide nutritional and medical assistance to the people of Mussende or Cuemba5. It has not only a moral obligation to provide this assistance; international law also stipulates the government's prime responsibility here6.

Both in Mussende and Camacupa, it required intensive lobbying by MSF, with assistance from OCHA and UNICEF, to get any kind of operational response from the authorities to these emergencies. Up until now, little has been provided by the authorities to address these needs.

As of early April 2001, Cuemba civil authorities instructed a large group of IDPs to leave for Camacupa and search for humanitarian relief there. They were forced to walk an 80-kilometer stretch of road. For security reasons, the FAA (army of the government of Angola) and aid organizations do not use this road. There is the risk of coming under rebel attack or ambush on this road. But even in this case, the authorities took no further measures to assure their safe arrival or a suitable reception for the IDPs.

In December 20007, the provincial government representative in Mussende alerted the governor of the province that over the previous eight months, almost 4,900 people had died of malnutrition or the lack of medicines, including 4,000 children (out of roughly 35,000 total for the municipality). There was no response from any government authority, or any passing on of this message.

In Mussende, despite repeated attempts by the civilian authorities to obtain cooperation from FAA in transporting severely malnourished children to MSF's feeding center in Cangandala, nothing has taken place, and it was recently reported that FAA refused to transport a group of 15 severely ill and malnourished children8.

Even in provincial capitals under government control, negligence gravely contributes to these emergencies. The rise in admissions to the MSF feeding centers in Kuito, is also caused by the increase in malnutrition among local residents who are not IDPs. A new pellagra epidemic (a fatal disease if not cured, linked to a deficiency in micro nutrients) has also recently broken out among the displaced and resident population in Kuito with 70 to 80 new cases a week.

The poor condition of the airstrip and the government's continuous failure to repair the runway - which has elicited international pressure since late 1999 - has forced cuts in the World Food program's (WFP's) delivering capacity and is hampering the response to the current crisis in Cuemba and Camacupa. Recent shortages of fuel, which fall under the responsibility of the authorities, have further seriously affected WFP's cargo capacity, which now covers only 50% of the required food needs to Kuito and Camacupa. On top of this, reinforced flight procedures as of June 2001, after two WFP planes had come under rocket attacks from UNITA, will result in further reductions of WFP food supply. With no emergency food stock in place, general food distributions are threatened as of June 2001, putting at risk at least 100,000 IDPs in Kuito. 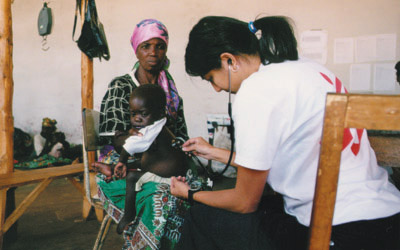 MSF teams in the capital Luanda as well as at field level have been actively trying to mobilize response to these emergencies, or alternatively to negotiate access to the people in need. However, these efforts have had little success. In the case of Mussende, active advocacy by MSF and UN agencies have resulted in a government nutritional and mortality assessment mission in March this year, and an April follow-up.

In the meantime, MSF has only been able to assist people who made the dangerous journey to flee the government or UNITA strongholds and make their way to international assistance by themselves.

In the end, humanitarian organizations like MSF cannot reach those populations most in need in Angola today in locations such as in Mussende, parts of Camacupa municipality and Cuemba.

There is an urgent need for access to people in places outside of what amounts to be dispersed islands of security where the international aid organizations can operate. (The UN estimates 500,000 people live in such areas). While the government regularly claims to control over ninety percent of Angolan territory, the necessary conditions for the provision of humanitarian assistance exist in only a very small part of the country. As far as UNITA-controlled areas are concerned, no access has been possible since the resumption of the war in late 1998. The parties at war as well as the international community should take whatever steps are necessary to negotiate, improve and secure humanitarian access, and to respect the right of populations in need to receive humanitarian support.

The Imperative of Urgent Government Action

In many areas these populations in danger, living in a highly vulnerable state for months now, are in need of immediate assistance. It requires a fundamental shift in the Government's political will to invest in the well-being of Angolans. It is the responsibility of the Government of Angola to respond immediately to the dramatic emergency situations in Mussende and Cuemba, to address the needs of other isolated communities before they develop into emergencies and to ensure the delivery of humanitarian assistance.