Why 2010 Must Be a Year of Action by Dr. Martin De Smet, Head of MSF's Working Group on Malaria 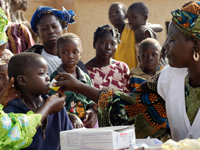 Mali: Treating Malaria In the Heart of the Village

The commemoration of World Malaria Day on April 25th will be of the utmost importance this year. The review in September of progress made towards the 2015 Millennium Development Goals will reveal the tragic toll malaria still takes on many developing countries. Despite improvements in treatments and diagnostics, malaria continues to kill almost one million people every year. In sub-Saharan Africa, malaria is the biggest killer of children under five.

The fact that quick, effective diagnosis and treatment is now possible makes the continuing tragedy of malaria in the developing world all the more unacceptable. Today, a more modern treatment called artemisinin-based combination therapy (ACT) is proving extremely effective at combating malaria. It acts quickly and has few side effects. The World Health Organization (WHO) and 41 African countries have changed their malaria guidelines to advise the use of ACT.

There are now diagnostic tests that are reliable and easy to use, that require just one drop of blood and that give results in 15 minutes. Last year, Doctors Without Borders/Médecins Sans Frontières (MSF) successfully diagnosed and treated more than one million malaria patients in 30 different countries. Currently, we are involved with the health authorities in Burundi to counter a malaria emergency in three provinces of the country and have already diagnosed and treated over 60,000 patients there.

However, in many developing countries where malaria is endemic, patients with fever are often systematically treated for malaria without any confirmation of the diagnosis. This can lead not only to unnecessary prescription of ACT but also to serious consequences for patients whose true condition may go untreated. The systematic use of diagnostic testing, as recommended by the WHO, could reduce these risks. MSF routinely uses microscopy or diagnostic tests, as well as ACTs, in all the medical projects where we treat malaria patients.

The provision of prevention tools such as insecticide-treated bed nets also needs to be expanded, and reliable testing and treatment for malaria has to be implemented on a much wider scale. In the context of widespread poverty, this means making health services free of charge for patients. Our experience in countries like Mali and Sierra Leone has shown that free access to comprehensive healthcare can lead to a three-fold increase in the number of patients being effectively treated for malaria. Most importantly, the number of deaths related to malaria can be significantly decreased.

2010 should be a year of opportunities in the fight against malaria. In September, governments of the world will review their progress in reaching the Millennium Development Goals. The 2015 goal is to halve the number of people falling ill with malaria and other major diseases, such as HIV/AIDS and tuberculosis. Major donors will also decide this year how much they will allocate to the Global Fund, a pool of donor countries aimed at fighting malaria, tuberculosis, and HIV/AIDS.

The necessary tools to fight malaria have been developed and should now be used and implemented. Many malaria-prone countries have made progress in fighting malaria in recent years, supported by funding provided mainly through the Global Fund. Yet in many countries the response is still far from sufficient. Developed countries need to be consistently committed to supporting developing countries. This includes increasing funding for the Global Fund.

The commitments made through the Millennium Development Goals gave many people in the developing world hope that unnecessary deaths due to preventable and treatable diseases would no longer be considered acceptable. There was hope that people dying because they could not access the treatment they need would no longer be considered “business as usual.” Whether these hopes will be borne out depends on how the world reacts to the continuing emergency of malaria and other acute health needs in the developing world.