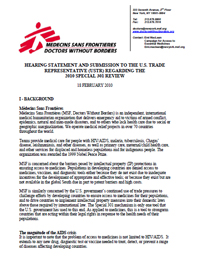 Doctors Without Borders/Médecins Sans Frontières (MSF) testified at a hearing before the US Trade Representative on March 3, about the effect of US trade and intellectual property pressures on global health policy and on efforts to expand access to affordable medicines in developing countries. MSF, which works in over 60 countries, highlighted the increasing need for affordable AIDS medicines and for innovation of drugs for neglected tropical diseases. MSF called on the US to stop bullying low- and middle-income countries trying to treat their populations.

Thank you for inviting me to testify. Médecins Sans Frontières, or Doctors without Borders, is concerned about the impact of IP barriers on access to medicines. People in developing countries are dying because medicines do not exist due to inadequate incentives for their development; or because they are unavailable due in part to patent barriers and high costs.

These concerns are shared by some of our international civil society colleagues, some scheduled but unfortunately unable to testify because of a lack of technological capacity.

This hearing is an opportunity to invite the alignment of US trade policy with US global health policy. A more engaged process is a first step. What is more important, however, is an end result that furthers access to medicines for all in developing countries.

Currently US trade policy has the effect of undermining US global health policy. First, the US IP agenda hampers the efforts of developing countries to purchase affordable medicines. Second, it drives up the cost of medicines for the US bilateral AIDS initiative, PEPFAR, and the multilateral Global Fund for which the US is the biggest contributor. The sustainability and effectiveness of PEPFAR and the Global Fund are dependent on continued access to affordable generic medicines. Third, US IP policy does not encourage innovation of new medicines needed for diseases of the poor – like neglected tropical diseases – a priority of President Obama’s Global Health Initiative.

The problem of access to medicines extends to any new drug, diagnostic test, or vaccine and to all diseases. Yet AIDS continues to serve as a powerful example of the potential provided by price-reducing generic competition. AIDS also unfortunately serves as an example of the persistent and increasing barriers to medicine access imposed by heightened IP measures.

Today, four million people are on antiretroviral therapy, or ART. This is only possible because generic competition caused annual first-line drug prices to plummet from over $10,000 to under $80 today. MSF could not provide treatment to 140,000 people in more than 30 countries without generic competition. The US government acknowledges the significance of generic competition in its global AIDS contributions, too. PEPFAR has reported savings up to 90% through the purchase of Indian generic medicines.

There is also an approaching treatment timebomb. Increasingly patients will need to switch to newer drugs for long-term survival. In our South Africa project, 14% of those on treatment for 5 years need to transition to 2nd line drugs. There are deadly costs to not transitioning out of a failing first-line regimen. A recent study found that the mortality rate was three times higher for those remaining on a failing regimen for one year.

But the price difference is massive between the cheapest first-line medicines – and improved first-line, second-line, and salvage therapy. These newer drugs are more expensive because they are more often patent-protected in all countries with pharmaceutical manufacturing capacity. For second-line treatment, the difference in cost is a factor of 8-12. For salvage therapy, far more than that – likely 27 times as expensive or more. Essentially drug costs will increasingly limit patient options. Because of a lack of access to the right drugs and sufficient funds, many people will not appropriately transition to more effective regimens – with deadly consequences. Still the cost of patients transitioning to newer drugs will quickly swallow health budgets unless there are dramatic price reductions of the kind seen through generic competition.

AIDS is only an example of what we can expect or already see for other diseases. But this need not and cannot be the case. The US is bound by the Doha Declaration and the Global Strategy and Plan of Action to support an agenda that encourages innovation and access to affordable medicines in developing countries.

I will briefly highlight the use of Special 301 to undermine the rights of countries to define patentability criteria and to issue compulsory licenses for medicines.

Countries have the right to determine patentability criteria. Yet Brazil and India, among other countries, were named in the 2009 Special 301 report in part because of their establishment of entirely legal limitations on patentability. Brazilian and Indian safeguards serve to prevent unnecessary and improper patenting of medicines.

India’s Section 3d, for instance, prevents patents unless there is a medical benefit over existing medicines. Relying on Section 3d, India rejected a patent for a nevirapine syrup used to treat pediatric AIDS. Because India is effectively the pharmacy of the developing world, this was a critical decision for HIV+ children in India but also for all children in low- and middle-income countries who rely on Indian generic AIDS drugs – and who cannot wait.

Just because Australia grants a patent on the wheel does not mean that India and Brazil must also.

Countries also have the right to issue compulsory licenses. Despite the US use of compulsory licenses, the USTR has consistently challenged developing countries aiming to do the same. The TRIPS Agreement includes no restrictions on the conditions for the use of compulsory licenses. The Doha Declaration affirmed that countries have “the freedom to determine the grounds upon which such licenses are granted.” Yet PhRMA again this year tries to invent restrictions that do not exist within international law and compel developing countries to accept them through US trade pressures.

The importance of compulsory licensing can be illustrated by the Thai example. There were particular needs for compulsory licensing in Thailand, including concerns regarding the price, appropriateness and reliability of supply of ARVs. Thai compulsory licenses had dramatic effect. The AIDS drug efavirenz, for instance, experienced a 50% price reduction, allowing Thailand to increase coverage by 20,000 people. At the time, USTR was forced to acknowledge that Thailand had acted within its legal rights.

Nonetheless, USTR has unacceptably kept Thailand on the Priority Watch List. Such inclusion puts pressure on Thailand but also signals to other countries to be wary of using legal means to ensure a sustainable supply of lifesaving and health-improving medicines.

The Special 301 report must no longer be used to encourage TRIPS-plus IP measures not required by international law. The Special 301 report must no longer threaten developing countries for acting within their rights to ensure access to medicines for their populations. Rather than using the Special 301 report as a bully pulpit to impose a heightened IP regime on developing countries, the US government should use its laws, policies and financial resources to ensure that R&D is needs-driven and encourages innovation; and to ensure access to medicines for all including through the full exercise of TRIPS flexibilities.

Is this something that the USTR under the Obama Administration will commit to?