DR-TB Drugs Under the Microscope 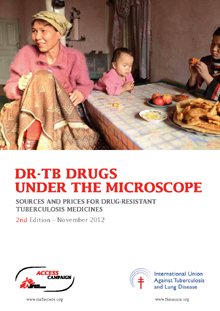 Tuberculosis (TB) is a curable disease that continues to kill nearly 1.4 million people across the globe each year and is the main cause of death in people living with HIV/AIDS. In 2011, there were up to an estimated 400,000 cases of multidrug-resistant TB (MDR-TB) among notified TB patients; MDR-TB is a form of the disease that does not respond to at least two of the primary drugs used to treat the disease. Close to 10 percent of all MDR cases are in fact extensively drug-resistant (XDR-TB), meaning they are also resistant to two of the key drugs used as a part of second-line regimens.

Yet the response to the epidemic remains inadequate. With 94 percent of patients at risk of MDR-TB (those previously treated) not having access to tests capable of diagnosing MDR-TB, and only 19 percent of people with MDR-TB having been enrolled on treatment in 2011, the full extent of the burden is unknown and undertreated. The Global Drug Facility—the international pooled procurement mechanism for TB medicines and diagnostics—procured DR-TB treatments for less than 20,000 people in 2011.

Given this alarming outlook, it is imperative that DR-TB be considered a public health emergency, one that mobilizes an appropriate response from all stakeholders, including governments, the World Health Organization (WHO), the private sector, donors, civil society organizations, and affected communities.

Treating DR-TB is complex: medicines need to be taken for two years, and regimens need to be tailored to the individual patient, based on which drugs are effective against that person’s infection. Side effects are severe and incapacitating, so much so that programs must devote considerable resources to adherence counseling, managing side effects, and providing psychosocial care. From the programmatic perspective, significant investments are required. Resources are needed, in human resources and training, investment in laboratory infrastructure to diagnose infection and monitor treatment, as well as ensuring adequate infection control measures are taken. These challenges, although considerable, lie beyond the scope of this report.

This report focuses on just some of the many factors that hamper the scaling up of DR-TB treatment—the limited availability and high cost of quality assured medicines for resistant strains of the disease, owing to an insecure market and insufficient demand; and the research questions that remain unsolved with existing medicines. Finally, as the R&D pipeline prepares to deliver the first new compounds for TB in close to half a century, the report provides an initial assessment of the approaches to be taken in order to radically transform our ability to respond to this plague.

Drug-resistant tuberculosis (DR-TB) is used to describe strains of TB that show resistance to one or more first-line drugs.

Multidrug-resistant tuberculosis (MDR-TB) is defined by TB that is resistant to at least isoniazid and rifampicin, the two most powerful anti-TB drugs.

The phrase ‘totally drug-resistant TB’ has been used since late 2010 to describe a group of patients in India that have developed resistance to all drugs for which they were tested. However, this is not accepted WHO terminology, and these cases are officially defined as XDR-TB.

All forms of resistance to more than one of the first-line drugs, and which are neither MDR-TB nor XDR-TB, are defined as polydrugresistant TB (PDR-TB).