Giving Developing Countries the Best Shot: An Overview of Vaccine Access and R&D

MSF and Oxfam warn that vaccination programs for the developing world are facing an acute funding crisis. 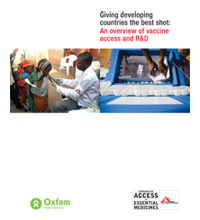 Vaccines have made possible some of the greatest public health successes of the past century. Immunisation helps avert an estimated 2.5 million child deaths each year, as well as millions more bouts of illness and disability. Poor countries as well as rich have benefited, although developing countries almost always benefit only after long delays. Basic childhood immunisation is one of the few health interventions to which most of the world’s poor have access, free of charge and through the public sector. In fact, immunisation is one of the most equitable health interventions, protecting girls and boys alike, and reaching the poor within countries at higher rates relative to the wealthy than other services.

Despite their impact, vaccines have generally received less attention than drugs. But the vaccine landscape is shifting, and new opportunities, challenges, and debates have pushed vaccines to the centre of global health discussions. The issues are complex and the experience gained in the struggle for access to HIV medications is an imperfect guide. The basic principles—equitable access and research and development (R&D) based on needs—are the same, but vaccines differ from drugs in important ways.

There are multiple factors that make delivering vaccines to children in developing countries difficult. These include – among others – high prices of newer vaccines, the lack of R&D for better-adapted and needed vaccines, as well as weak health systems with corresponding health worker shortages. This paper will focus on the first two points, outlining some of the major issues and exploring possible solutions.

Two fundamental challenges surround vaccine access and R&D: First, the newest vaccines are often prohibitively expensive, in part because of a lack of adequate competition in the market, hindering their use in developing countries. Second, because there is little incentive for pharmaceutical companies to conduct R&D for diseases that affect populations with limited purchasing power, some diseases continue to be unaddressed by vaccines altogether, while many vaccines are not well-adapted for people in developing countries.

Challenges in vaccine research and development

As with drugs, vaccine R&D is dominated by the paradigm of multinational pharmaceutical/vaccine companies charging high prices for products tailored to wealthy markets. Companies argue that high prices are needed to recoup R&D costs. This model distorts R&D priorities such that companies are not necessarily developing products to tackle the greatest global medical needs and are not producing products that are adapted to the particular needs of developing countries. In addition, companies are not necessarily producing products in a manner that ensures the lowest cost, focusing instead primarily on bringing vaccines to market as quickly as possible, as even a few months of advance over competitors can bring big commercial gains.

Most of the basic research upon which vaccine development depends continues to be carried out by universities and public laboratories, with multinationals assuming the later stages of vaccine development and marketing. With their large revenues, experience and expertise, companies have been able to bring new vaccines through the expensive and time-consuming development process. However, the public sector has historically played an important role in vaccine R&D in the U.S. and Europe. For example, the U.S. Army led the development of several vaccines after World War II. Re-engaging the public sector in vaccine R&D could help close the R&D gap.

Because the pharmaceutical industry for the most part does not conduct R&D targeted to developing country health needs, alternative mechanisms to stimulate needs-based R&D must be employed. There are several models that aim to either ‘push’ R&D via upfront funding (e.g. product development partnerships – PDPs), or to ‘pull’ R&D via incentives that entice industry to invest in developing needed products (such as advance market commitments, prize funds and GAVI itself ).

An example of a successful ‘push’ mechanism is the Meningitis Vaccine Project, a PDP established in 2001 by PATH and WHO that has developed a needed vaccine to address a specific strain common in Africa’s ‘meningitis belt.’ Technology was licensed through the U.S. National Institutes of Health to the Serum Institute of India, which agreed to provide the vaccine at an affordable price in exchange for transfer of know-how support for clinical trials in Africa and India, and the prospect of a GAVI-supported market. The total project cost amounted to just $60 million, excluding plant costs, and the vaccine is expected to be available for use in Africa toward the end of 2010. While this project represents a success story, and shows how emerging suppliers can play an increasing role in vaccine R&D, the model will mainly be useful for adaptations of existing vaccines with known technologies, rather than for the development of entirely new and more complex vaccines, such as those for TB, malaria and AIDS.

An example of a successful ‘pull’ mechanism is GAVI itself, which through its long-term purchase commitments sends a signal to industry that developing countries are a viable and long-term market. However, GAVI’s pull has not been strong enough to stimulate the development of new and sophisticated vaccines.

The advance market commitment (AMC) model is a pull mechanism that ideally promotes needed vaccine R&D by guaranteeing a subsidized market for the resulting product if it meets certain specifications and is purchased by countries/donors. But the AMC launched by donors in 2009 to accelerate delivery of pneumococcal vaccines was aimed at two vaccines that were already in final stages of development and close to gaining marketing approval, thus rendering it more a procurement mechanism than an R&D incentive. It is possible that these vaccines could have been purchased as – or more – cheaply through conventional UNICEF tender procedures than with an AMC. Whether or not the pneumococcal AMC accomplishes its goals, the question will remain whether this is an appropriate mechanism to stimulate the development of new vaccines, as originally hoped. While well-designed AMCs could play a role in mid-stage development or for less complex vaccines – as a complement to public sector research funding, PDPs, and other push mechanisms – they are unlikely to be a practical way to drive R&D for challenging early-stage vaccines that face substantial scientific obstacles.

Prize funds are another innovative pull mechanism to stimulate health-needs-driven R&D while securing access to a product at an affordable price upfront. The prize awarded to a successful product developer would be linked to the product’s public health impact, and producers may be asked to agree in advance to sell the product at an affordable price. Several prize fund proposals are on the table, but none has yet been established for vaccine development.

Because several new vaccines with vital implications for developing countries have come to market recently, every effort must be undertaken to ensure that children in these countries gain access to them. This will depend both on raising additional funds and bringing prices for newer vaccines down by accelerating the entry of emerging suppliers into these markets. Technology and know-how transfer will be crucial, and will also help emerging suppliers to assume a larger role in vaccine R&D. And innovative models to stimulate R&D will be critical to meeting still-unaddressed vaccine needs.