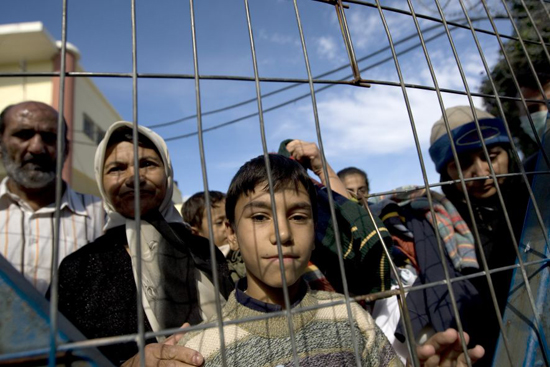 Migrants being held in the Pagani detention center on the Greek island of Lesbos in October 2009.

Every year tens of thousands of asylum seekers and migrants arrive in Greece, the southeastern border of the European Union. In 2009, 36,472 irregular migrants were arrested at the Greek-Turkish land and sea borders. Many have left unstable or war-torn countries or are escaping persecution, human rights violations or extreme poverty. Afghans are the most numerous among the new arrivals, followed by Iraqis, Somalis, Palestinians, and Pakistanis. Unaccompanied minors and families are increasingly among those making the journey. Lacking legal ways to travel to Europe, migrants and asylum seekers alike are forced to use the services of smugglers and thus often fall victim to exploitation or violence by criminal networks. 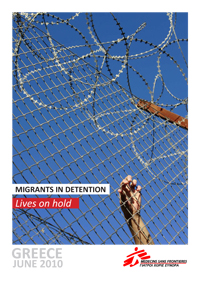 Once they arrive in Greece, irregular migrants and asylum seekers are systematically detained. They are kept in detention centers located along the eastern Greek borders or in other detention facilities, such as police stations. According to the law they can be detained for a period of up to six months. Most are released within a few weeks and are given a written order to leave the country within 30 days.
From August 2009 to May 2010, MSF provided psychosocial support to detained migrants and asylum seekers in three detention centers: Pagani in Lesbos, Filakio in Evros, and Venna in Rodopi. At the same time, MSF raised concerns with the authorities, urging them to improve living conditions and services provided in the detention centers.

With this report MSF aims to raise awareness and express concerns about the impact of the current detention system on the mental health and well-being of migrants and asylum seekers arriving in Greece. The report documents the unacceptable living conditions in the three detention centers where MSF intervened and presents data from psychological counseling sessions as well as individual testimonies. It shows that detention can exacerbate existing symptoms and contribute to new traumas and psychological distress. The report often cites what newly arriving migrants told MSF teams about their experiences in detention.

Asylum seekers and migrants arriving in Greece have often experienced traumatic events. Almost one-third of MSF patients spoke about attacks by armed groups, bombings, beatings or other forms of violence that they suffered directly or witnessed in their countries of origin. MSF psychologists observed symptoms of post-traumatic stress disorder (PTSD) in 9.5 percent of the patients. A further 15 percent of the patients expressed anxiety and worry about family members they had left behind.

However, being detained was the single most important reason of frustration for the majority of the irregular migrants and asylum seekers. For most, detention was a painful and inhumane experience. Of the 305 migrants seen in first consultations, 39 percent presented symptoms of anxiety such as constant worry, fear, panic, restlessness, while 31 percent presented symptoms of depression, such as sadness, loss of interest, hopelessness, and thoughts of death. Three percent of MSF patients attempted suicide or self-harm because they felt detention was unbearable or because they wanted to protest about the length of detention.

Living conditions in detention facilities for migrants do not meet national and international standards. Inappropriate facilities are often used for the detention of migrants, such as in the case of Pagani or Venna detention centers. Overcrowding was a persistent problem in some detention facilities. Sanitary conditions are usually very poor. Overcrowding and poor hygienic conditions can contribute to the spreading of several medical conditions, including dermatological infections such as scabies and viral infections such as measles.

Not being allowed out of the cells into the fresh air was also a significant concern for migrants. In the detention centers where MSF worked, families were separated and were given little opportunity for communication, which increased feelings of anxiety and insecurity. Patients also complained to MSF teams about the degrading and abusive behavior of police and other detention center staff.

No provisions are in place to meet the needs of vulnerable groups, including unaccompanied minors, infants, pregnant women, and people with disabilities. Detention centers lack support staff and interpreters. Migrants and asylum seekers receive no or little information about their legal status and the detention system. Moreover due to the lack of appropriate information and the absence of legal counseling and interpretation services, many people in need of international protection are not identified and thus do not receive any support.

Migrants consistently complained to MSF teams that they received inadequate medical care and had difficulties communicating with the doctors. Reasons for inadequate health care in detention centers included the insufficient number of medical personnel, the absence of interpreter services, and the lack of a standard protocol for the medical screening and follow up of new arrivals. In addition, detained migrants did not receive any psychosocial support apart from that offered by MSF.

MSF urges the Greek authorities to carefully measure the impact of detention on the well-being of migrants and asylum seekers and to seek alternatives to the detention of new arrivals. Thus, the plans by the Greek government to establish reception and screening centers for new arrivals should be implemented without delay. Conditions and services provided in the reception and screening centers should be in accordance with international standards.

In any case, the Greek government needs to immediately ensure that detained migrants and asylum seekers are treated in a humane and dignified manner and that those who wish to do so are given the possibility to seek asylum.