MSF and the Meaning of Accountability 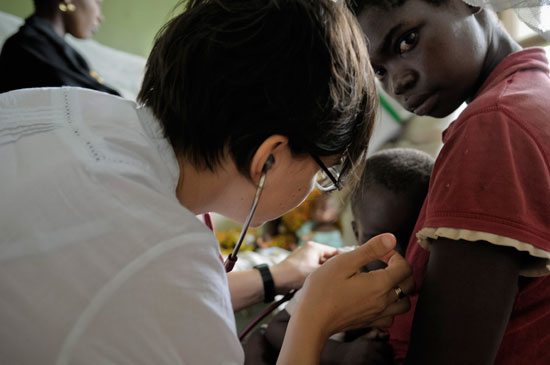 Treating a 20-month-old boy for malaria.

What does accountability mean, in practice and principle, for Doctors Without Borders/Médecins Sans Frontières (MSF)? It’s something that’s at the core of our conduct and identity, and something we’d like to discuss further in this year’s annual report.

It means that we continuously reflect on the impact of our humanitarian action, that we keep the people who support us informed, and that we are transparent and specific about the costs and benefits of our operations. That is why we published lengthy reports about our work in Haiti six months after the devastating January 2010 earthquake and again six months later, after the nation was further stricken by a cholera outbreak. That is why, at the end of 2011, we similarly documented our work in the Horn of Africa—in Somalia, Ethiopia, and Kenya—during the malnutrition crisis that contributed to the death of tens of thousands of Somalis and the displacement of hundreds of thousands more.

It means that we ground our decisions in our medical and humanitarian ethics, and that experienced MSF teams conduct independent assessments of the needs on the ground before we open a project. MSF exists to assist those who would otherwise have no access to medical care. And when it appears that MSF can provide medical services others cannot, we aspire to treat those who need it, regardless of ethnicity, religion, or affiliation, regardless of how they were hurt or what sympathies they might have. But we must answer certain questions when gauging the efficacy of our programs: First and foremost, is what we are doing medically relevant and medically effective—are we saving or improving lives? Additionally, because we are aware that aid can, at times, do more harm than good, we make sure that our presence, especially in conflict zones, is providing comfort to the tormented, not the tormentors.

“Accountability means we protect our independence and vigilantly monitor our own impartiality.”

In an effort to uphold the principles of medical ethics, we fight for access to better treatments and diagnostics in the field, demanding— ceaselessly, if not always successfully—that patients have access to tools and medications available to wealthier nations. We aim to make the care we deliver of the highest possible standard. Our field workers are carefully selected and rigorously vetted, and they must already have relevant experience before they go on assignment. We do not use second-hand or donated medicines. We do not veer from medical goals towards development work. We directly manage all of our own programs as well, communicating directly with the local leadership and with people we seek to help, independently assessing needs, and determining how our aid will be allocated.

Accountability means we protect our independence and vigilantly monitor our own impartiality. If we turned patients away because of their affiliations, we would undermine our principles, our safety, and the humanitarian space we have tried to build, leaving dozens, hundreds, or thousands of people without care. Even in the worst situations, international humanitarian law dictates that there should be a medical space in which a person can access treatment without wondering if they might get arrested, attacked, or killed for doing so. To preserve that humanitarian space for our action, we maintain open dialogues with all parties, while at the same time staying aware that parties involved in today’s conflicts—like the al-Shabaab, or the Taliban, or the US or British or Pakistani military—might politicize or instrumentalize our work to further their political goals.

“We do not carry guns, so we must find other ways to protect ourselves and our patients.”

Asserting and then demonstrating MSF’s impartial, medically-focused agenda is part of a process that helps us establish trust, and once trust is established, even well-armed fighters, we hope, begin to have faith in the doctors and nurses bumping down those long, dusty roads to reach people in crisis. Then, when our mobile clinics ask local commanders for authorization to access a village cut off by fighting or affected by a measles or cholera outbreak, that trust—and the knowledge that we’ll treat all victims—helps us gain access and protection from local communities. Deliberately working with one party to a conflict or serving some broader military-political agenda would compromise both that trust and our ability to deliver assistance. It would compromise our safety as well, because we do not carry guns, and in only one place in the world, Somalia, do we have armed guards. We must find other ways to protect ourselves and our patients.

What We Can and Cannot Do

Accountability means that we are honest about what we can and cannot do, that we make decisions based on medical needs alone, and that we do not raise money for places or programs we cannot see through. That is why we told people who wanted to donate to our work in Japan following the March 2011 earthquake and tsunami that we had limited operations there because effective national health and disaster relief networks were already in place. A similar dynamic prevailed following the Indian Ocean tsunami of 2004, when we made an unprecedented offer to return previously-accepted earmarked donations that we would not have been able to spend (many donors instead chose to derestrict their gifts). In the main, we believe that unrestricted pledges give us the ability to direct donor funds where the needs are greatest. On rare occasions—and once in recent memory, in Haiti following the earthquake—we’ve asked for money for specific contexts, but only when we knew the cost of our medical activities would exceed what was budgeted and that additional funds were necessary to meet unprecedented needs.

Accountability means that we reveal how much we allocate to programs, fundraising, and management and administration, and that for more than 15 years now, we have spent more than 85 percent on programs. In 2011, we spent upwards of 86 percent on programs, less than 13 percent on fundraising, and just over 1 percent on administrative costs, including salaries for MSF-USA office staff. Speaking of salaries: We have exceptional, dedicated individuals in the US office, but our compensation structure recognizes and reflects the fact that we aim to serve the world’s most vulnerable people. We provide excellent benefits, but executive pay is decidedly moderate—at the bottom quartile, in fact, for management positions at nonprofit organizations of comparable size.

“Accountability means that we are honest about what we can and cannot do, that we make decisions based on medical needs alone, and that we do not raise money for places or programs we cannot see through."

It means that we discuss with you the reasons we’re in some places and not others, along with the calculations made along the way. This past year, MSF published Humanitarian Negotiations Revealed, a uniquely frank account of some crucial choices the organization made in the last decade, including the extensive conversations we entered into with the Afghan government, NATO forces, and the Taliban to delineate our intentions and principles before we re-started operations in Afghanistan in 2009, or the highly restrictive conditions we accepted from the governments of Sri Lanka—during the brutal conclusion to the country’s civil war—and Myanmar, where mobility was severely proscribed but there has been room enough for us to treat more than 20,000 people with HIV/AIDS who would otherwise now be dead. Some decisions were and are hotly contested within MSF, but hindsight allows us to mine them for lessons to apply in the future.

Accountability means understanding there will be instances when the conditions impressed upon us make it impossible to work in an ethical, medically effective, or safe manner. We have in the past suspended or curtailed operations in North Korea, when aid was channeled through a public system that privileged regime allies rather than the most vulnerable groups, and in Goma, in the Democratic Republic of Congo (then Zaire), when militias that had carried out mass killings in Rwanda were using aid delivered to refugee camps to help them prepare for future attacks. In early 2012, we halted a program delivering assistance in prisons in the Libyan city of Misrata because we realized that prisoners we were treating were being tortured again after they received care. And in Somalia, we decided that we could not expand programs any further until our colleagues Blanca Thiebaut and Montserrat Serra, who were abducted in October 2011, were released. These are hard decisions that can mean forgoing care for a great many people, but doing otherwise would undermine our reasons for being there and the principles we hold most dear.

“To be accountable is to be willing to review, analyze, and critique our operations constantly, at all levels.”

To be accountable is to be willing to review, analyze, and critique our operations constantly, at all levels. In Paris, there is an arm of MSF known by its French acronym, CRASH, that exists for just this purpose and is staffed by some of our most senior officers. In ways headquarters staff focused on day-to-day operations cannot, CRASH reflects on projects and analyzes MSF's actions in light of past operations and our essential humanitarian principles. A similar unit based in our Geneva office recently finalized a three-year study of how people in the countries where we work see us. The resulting book, In the Eyes of Others, was published in early 2012 and, as with Humanitarian Negotiations Revealed, MSF offered the text for free on our website and organized a number of public forums, webcasts, and interviews to further examine the topic.

We also conduct regular program evaluations and share data and research we’ve collected that might—or should—inform protocols or policies through our Field Research website (fieldresearch.msf.org). Our epidemiological arm, Epicentre, often plays a key role in these efforts, and over the years, MSF has influenced the debate on (among other things) treating HIV in resource-limited countries, treating and preventing malnutrition in chronic settings, and carrying out mass vaccination campaigns during measles outbreaks. And we look not only at what’s happening in a given moment, but also at the factors and dynamics that contributed to the situation—why some groups cannot access care, for instance, why some tools or medications are hard to come by, or why specific agreements or players are preventing treatments and medicines from getting where they are needed most.

Overseeing and monitoring all of this is our Association, which is made up of current and former field workers. Its impact is felt across our operations, not least because Association members elect our Board of Directors, almost all of whom (aside from the Treasurer and the Secretary) are former field workers themselves. The Board, in turn, follows field projects closely, questioning the MSF-USA management team regularly, greenlighting project grants, and making sure work proceeds in line with the current four-year operational plan. The result is an organization directed by people who know whereof they speak when it comes to field operations and, now more than ever, an organization that looks after its volunteers when they return home. Last year, MSF-USA expanded its psychosocial unit, which gives the people we send out a chance to discuss their experiences with qualified, empathetic counselors or peers who know well the road they’ve traveled.

Lastly, accountability means that we try to infuse reports like this with the same commitment to openness and transparency, recognizing that not everyone can come to the field with MSF, but that we can try to bring the field back to them, doing our utmost to convey the nature and scope of our work, and the ways in which the resources donors so generously entrust us with are used.