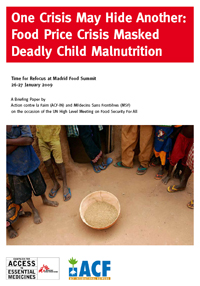 In April 2008, when riots in many places brought into sharp relief the impact soaring food prices had on disadvantaged communities around the world, UN Secretary- General Ban Ki-moon established a Task Force on the Global Food Security Crisis composed of the heads of the United Nations specialised agencies, funds and programmes, International Monetary Fund (IMF) and the World Bank (WB).1 In July 2008, this Task Force released an Action Plan, the Comprehensive Framework for Action. This roadmap contains specific strategies to address both “Immediate Needs” of people facing life-threatening or debilitating food deficits as well as “Long-Term” change to end the vicious cycle of food insecurity. Six months on, it is not clear what real progress has been made:

While the global prices for basic commodities like flour, milk, and corn have fallen back to the levels of end 2006, deaths and crippling lifelong handicaps caused by malnutrition have not decreased in the most affected countries where malnutrition is a recurrent, seasonal phenomenon with only very limited links to global food price developments. The reason lies in the specific needs of very young children for a diverse and nutrient-rich diet.

Every year, during the so-called “hunger-gap” in the months preceding the harvest, families in resource-poor communities cannot afford to provide their rapidly developing young children with an adequate, nutrient-rich diet. Whereas food deficits and lack of access to nutritious food may have negative impact on older children and adults, for young children between six months and three years of age it can be catastrophic both immediately because of the risk of death and illness and also in the long run in terms of poor health, disability and poor educational and development outcomes.

As the malnutrition crisis continues unabated, implementation of the UN High Level Task Force Action Plan remains critical. The gathering in Madrid will have betrayed children in need unless the participants leave with a clearer idea of how the UN Action Plan will be implemented and who will pay for it.

The ongoing crisis of childhood malnutrition

Acute malnutrition is a medical and humanitarian emergency that accounts for 11 percent of the global burden of disease, contributes to the deaths of between 3.5 million and five million children younger than five each year, and leads to long-term poor health, disability and poor educational and development outcomes.2 Just like children, lactating and pregnant women suffer serious consequences if they do not get the nutrients they require.

Acute malnutrition is a phenomenon that at any given moment impacts roughly 55 million children with about 19 million of them suffering from the most deadly form of severe acute malnutrition. According to UNICEF, undernutrition is actually getting worse in 16 high-burden countries, while many more are not progressing towards meeting the Millennium Development Goal target of reducing undernutrition by half between 1990 and 2015.3

While combating hunger depends on having access to food in sufficient quantity, conquering malnutrition also means assuring foods of adequate nutritional quality. There are new proven strategies to treat and prevent the most dangerous kinds of malnutrition – strategies which will take pressure off overburdened health systems in the affected countries. For young, malnourished children, foods rich in nutrients, vitamins, and minerals are essential to survival and development. Without access to a wide range of essential nutrients, nine children will continue to die every minute of causes related to malnutrition. 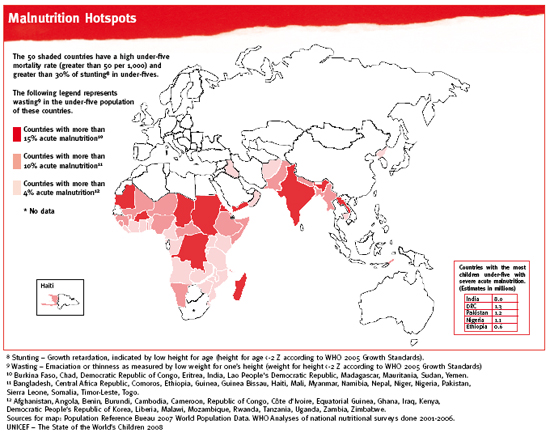 Addressing Malnutrition: Put national plans and international support behind the Action Plan to be discussed in Madrid.

In order to make a difference in Madrid, government representatives, UN leaders and donors must make a commitment to:

1. Treat all children with severe acute malnutrition by 2012

At any given moment an estimated 19 million children are suffering from severe acute malnutrition. Until recently, treatment of this most deadly form of malnutrition has been restricted to facility-based approaches, greatly limiting its coverage and impact. In recent years, however, great advances in nutritional therapies for this most deadly form of malnutrition have been made: The majority of severely malnourished children can recover rapidly by taking a course of ready-to-use therapeutic food (RUTF) that mothers can provide at home. These energy-dense dairy-containing pastes and biscuits are high-quality foods that deliver the nutrition children need for catch-up growth and to ward off infection. The WHO’s 2007 “Joint statement on the community-based management of severe acute malnutrition” made this treatment a standard policy to which the whole UN system and its member states are supposed to adhere. The number of children treated worldwide has increased from an estimated 260,000 in 2004 to an estimated 1.8 million in 2008. MSF and ACF treated more than 380,000 children during 2006 and 2007. But much more needs to be done to reach the nine out of ten children affected by severe acute malnutrition who remain untreated. 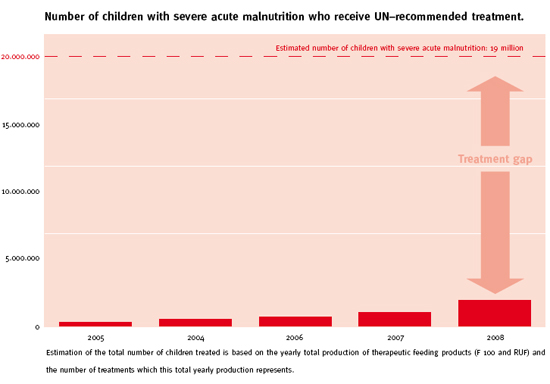 Community-based and outpatient feeding programmes have the potential to save acute malnourished children using RUTFs. Yet, today, nine out of ten children affected by severe acute malnutrition remain untreated. We urge the High Level Task Force to adopt a goal of reaching 100% of children in need by 2012.

Community-based and outpatient therapeutic feeding programmes have the potential to treat acute malnourished children using RUTFs, but now it must become a reality. In the past two years, the treatment coverage has doubled each year. We urge the UN High Level Task Force to adopt an objective of full coverage by 2012.

Malnutrition is an issue of diet quality as much as quantity. For young children, the principles of good nutrition are well established. They centre on good maternal nutrition and exclusive breastfeeding for the first six months followed by the introduction of a nutritious and diverse complementary diet containing some animal source foods, such as milk, meat, or eggs while breast feeding is continued. But in the areas most chronically devastated by malnutrition such as South Asia, the Sahel, and the Horn of Africa, many families simply cannot afford to provide the nutritious – and more expensive – food young children need for good health.4 Rural families in these malnutrition hotspots regularly face seasonal periods of food scarcity during the “hunger gap” between two harvests.5 This leads to poor diet variety that particularly affects young weaning children who need rich nutritious foods to assure their healthy development. Many families struggle to survive on a diet of little more than cereal porridges, millet, maize, or rice, a diet that lacks many essential nutrients that young children need.6

International food aid and government food programs can provide an essential nutrition safety net to prevent the immediate and long-term health, educational, and developmental consequences of undernutrition. Children between the ages of six months and three years of age should not have to wait until they are at the brink of death before receiving effective nutritional assistance. But to date many international or national nutrition assistance programmes have had limited impact in preventing the downward spiral into life-threatening malnutrition.

“Assistance can be provided in the form of food aid, vouchers or cash transfers, taking into account the nutritional and dietary needs of recipients.

Today, most food aid does not contain nutrient-rich food that responds to the needs of children between six months and three years of age. Donors and governments need to change policies to ensure that food aid and programming meets adequate nutritional standards.

This failure is due to assistance programmes built on foods that are not nutritionally appropriate for young rapidly developing children. The main foods—fortified blended flours made from either corn or wheat plus soya —do not meet the minimum nutritional needs of the most vulnerable children between six and 24 months.7

In other words, programmatic restrictions and cost considerations have created a glaring and unacceptable double standard: people in donor countries would never give their own children the food sent to children in the developing world.

Experts agree that quality needs to be raised

In Malawi and Ghana, children who received formulations of these products grew better and achieved critical developmental milestones faster in comparison to children who did not.9 MSF was able to show a significant reduction in the incidence of wasting and severe wasting through distribution of RUFs to non-malnourished children in Niger in 2006 and 2007.10

MSF has committed to reforming its own practices to make sure nutritionally appropriate foods for children are included whenever the organisation distributes family rations. ACF is currently implementing a number of projects in countries such as Kenya, Sudan and Myanmar, which aim at improving the quality of nutritional rations for blanket feeding programmes targeting malnourished children.

In addition, some major organisations like UNICEF in Somalia11 and the World Food Programme (WFP) in Burkina Faso are beginning to provide childappropriate supplemental RUFs in the rations provided to families.12 But ensuring that food aid and national food programmes meet minimum nutritional requirements must become the norm, not the exception. To this end, the WHO must move swiftly to issue clear nutritional standards and implementing agencies and national programmes must urgently change the composition of their food aid baskets to ensure that children receive essential nutrients.

Some agencies and governments are willing to adopt new standards that include adequate food for young children but they depend on the creation of a new initiative to support and fund programmes.

Funding needed to address the crisis of malnutrition has so far not been comprehensively evaluated. Thorough assessments are needed urgently to help governments and donors in budgeting mid- and long-term nutrition programmes. MSF estimates that at least 2.76 billion Euros are immediately needed to treat the roughly 55 million children worldwide most affected by severe acute malnutrition. While seemingly large, such a figure represents a tiny fraction of the sum developed countries are planning to provide in economic stimulus packages in 2009.

“Ensure that emergency needs are fully met, including by scaling up food assistance, nutrition interventions, and safety net programs, (…) to address hunger and malnutrition in the most vulnerable populations.” (Comprehensive Framework for Action, page 8)

So far, funding to address childhood malnutrition has not been committed to the UN Action Plan.

All developed nations as well as Latin American countries such as Brazil or Mexico have shown how malnutrition and the deaths and handicaps associated with it, can be successfully overcome.

The US, for example, allocated 6.2 billion USD in 2008 for the Women, Infants and Children programme which provides more than 8.7 million recipients from disadvantaged families with direct food assistance so they are not condemned to poor health, poor educational outcomes, and lower income earning potential.

So far, despite the UN Action Plan, donor governments and national governments from the 50 most impacted countries have not yet embarked on implementing strategies to eliminate acute malnutrition. One key problem has been the lack of a mechanism to support countries in setting up effective nutrition programmes. For example, if a developing country wants to address HIV/AIDS or malaria, it knows where to go to for both financial and technical support. No such support exists today for malnutrition. Therefore, a support mechanism is needed which could be hosted by an existing institution.

The Millennium Development Goals (MDG) 1 and 4 will never be reached by 2015 without a strong commitment on nutrition in order to reduce child mortality and the number of people currently affected by hunger.