Psychological Trauma of the Civil War in Sri Lanka

April 27, 2002
Psychological Trauma of the Civil War in Sri Lanka
This article appeared in The Lancet. All rights reserved.

Sri Lanka's ceasefire brokered by the Norwegian government 3 months ago has essentially held, bringing hope for the end of the country's brutal 19-year civil war. The war between the Liberation Tigers of Tamil Eelam, who have been fighting for an independent state in the north and east of the island, and the Sri Lankan government has resulted in more than 64 000 deaths and shattered the economy. 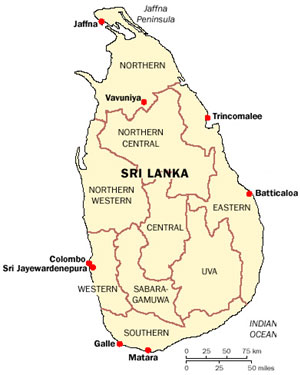 The Northern Tamil-controlled region is home to hundreds of thousands of people displaced by the conflict. Many of the region's estimated 371,000 population are former residents of the Jaffna peninsula who have fled the fighting since this symbol of statehood was recaptured by the Sri Lankan army in 1996.

In Vavuniya, a town close to the front lines, thousands of displaced people have been settled in government-run camps known as welfare centres. These centres were established 10 years ago as temporary facilities for people displaced by conflict and wishing to resettle elsewhere in Sri Lanka. Conditions in the camps are poor. Families (average six members) occupy an area of 3 m2. Hygiene is very limited, and water shortages and non-functional pit latrines are common. As a security measure, these 23 000 Tamils were virtually confined to the centres by a strictly-enforced pass system. The desperate living conditions, and the general level of trauma within the population, is reflected by the alarming rate of suicide in the camps, which is almost three times higher (103·5 per 10 000) than in the community (37·5 per 10 000). Indeed, the prevalence of suicide in Sri Lanka is one of the highest in the world.1 Alcohol dependency is high among the camp population, and frequent episodes of domestic violence, child abuse, and violence between neighbours are evidence of a breakdown in the social fabric.

Médecins Sans Frontières (MSF) has been working in Sri Lanka in both government and Tamil-controlled areas since 1986, and in Vavuniya for the past 2 years. Between Nov 13 and Nov 17, 2000, we did a survey in 162 displaced people living in the welfare centres to assess exposure to traumatic stress.2

Most respondents (60) were within the 25-34-year age group, and over half (100) were women. More than half had been displaced between 1995 and 1999. On average, people had been displaced three times before arrival in the centres. Most escaped with their family.

A substantial number of participants had been directly exposed to war. Many had witnessed attacks on their village, aerial bombing, mortar fire, cross fire, and instances of torture, and had seen wounded people, and people being burnt in their houses. 20 (12%) had been attacked, 28 (18%) arrested or kidnapped, 27 (17%) taken hostage or detained, 28 (17%) maltreated by police or army personnel, and 17 (11%) tortured. Instances of rape were low (five of 162) but there were concerns about underreporting since 60% of respondents (97) claimed to have heard of rape cases. Almost all had lost their homes or property (157, 97%) and faced starvation (152, 94%). 88% (142) described a constant feeling of being unsafe.

The survey findings provide an indication of the general level of suffering of the population in a country where chronic conflict has taken a dramatic toll and the health system is unable to cope. Health units, health professionals, and medical supplies have all suffered as a consequence of the long-term conflict, resulting in lower access, availability, and quality of health care.3 Most medical professionals have fled the conflict: 21 of 27 vacancies for government doctors in the northern region remain vacant.

It would be difficult to imagine a group of people suffering more from the psychological trauma of war. They have been the direct victims and witnesses of war and human rights abuses, they have been cut off from employment and the hope of self-reliance, and remain confined to squalid conditions that amplify the psychological trauma of the past and exacerbate mental health problems.

The local health authorities admit psychological health has long been a concern in Vavuniya, but are helpless to do anything about it because of lack of resources, expertise, and support from central government.

To help address the burden of mental illness and trauma, MSF is running a community-based programme with an emphasis on the psychosocial consequences of violence. Activities include increasing awareness, community strengthening, reinforcing coping-strategies for long-term war-affected communities, and counselling by trained national staff. A special emphasis is put on the prevention of suicide through community health workers who monitor the camp population for community disharmony and family problems, and provide counselling to help people find positive solutions to their difficulties. Since almost all suicide attempts involve poisons (allory seeds or agricultural poison), MSF and the local government have been working to impose stricter controls on these substances.

The ceasefire has allowed the movement of previously restricted medical supplies into the northern region in the past few months, and increased security should allow the establishment of long-term medical and psychosocial assistance programmes. There have been some improvements in freedom within the camps (mainly through the lifting of the pass system), but the poor living conditions in the welfare centres must be addressed.

The Sri Lankan authorities had recently begun relocating the displaced population, but with limited availability of land these areas were situated very close to the forward defence line and raised serious security concerns. Last month the relocation process was put on hold and a survey is now planned by the government to determine the wishes of the displaced population regarding relocation. We are concerned that any significant internal migration of people might be accompanied by compounding problems of epidemics, conflict with host communities, local or national shortages of basic needs, and a breakdown of social norms with resultant frustration and disillusion leading to violence.

In the long term, the acute psychosocial and practical needs of the population must be met by the relevant authorities. It will take much more than resettlement to heal the psychological wounds suffered during a generation of hostilities.