After Cyclone Aila: Outsmarting the Floods

A journal by an MSF water and sanitation expert 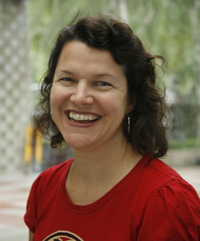 Kathy Dedieu is working as a water and sanitation specialist in the Doctors Without Borders/Médecins Sans Frontières (MSF) emergency project in Bangladesh following Cyclone Aila. The disaster contaminated many water sources, and ongoing flooding during high tides makes it difficult to clean and repair them. It’s Dedieu’s job to come up with alternative ways to get safe drinking water.

July 4: Looking for a dry spot

It is my third day here in Satkira District of Bangladesh. About six weeks ago, this place was inundated with water when Cyclone Aila hit and broke many levees in a region where people live at or below sea level. The result was much like Hurricane Katrina in New Orleans: the water just poured in, and a lot of it hasn’t left, even weeks later. Some areas are flooded again during every high tide. Elsewhere, the water is just sitting.

When the ocean broke through the levees, it brought salt water to the area’s drinking water supply. People in this area of Bangladesh get their water from large rainwater-collecting man-made ponds that have a sand filter at the end for treatment, or from deep tube wells that have a hand pump on top. The man-made ponds are now filled with salty, undrinkable water which needs to be pumped out so that the pond can be filled with fresh water. The tube wells need to be repaired and improved, and disinfected with chlorine. In some places, the population has moved to the top of the levee for now, the only dry place during high tide. These people lost everything and need to start at square one.

MSF is helping in several ways right now, and yesterday I assisted in the distribution of non-food items. This is a kit we are giving to the survivors of the storm, and it includes some rope, some buckets and plastic sheeting so that the families can collect rain water to drink. Today, I was with the medical team at a mobile clinic and saw several families using the supplies MSF had given them. They stake the plastic sheeting out at a slight slope to collect the maximum amount of rain water, which collects in the buckets. Now that monsoon season has started, it rains heavily almost every day, so this is a good source of drinking water for them. The monsoon will also help fill the emptied man-made ponds with fresh water. 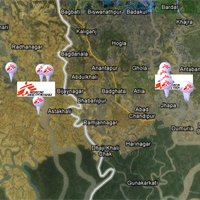 View MSF activities in Bangladesh and India after Cyclone Aila

Today, I went to a place called East Durgavati. During the storm, the water broke the levees, and water poured in. Here, the local population‘s sole source of drinking water are large ponds that collect rainwater. These ponds were inundated with ocean water during the storm. Furthermore, the rainy season was late in coming. MSF helped the area by pumping out one of the large ponds the public uses for drinking water.

Now, we are just waiting for the rain. Some has come, but not enough to fill the ponds yet. However, the people are collecting the rainwater at the household level. They set up four stakes and use the rope to tie plastic sheeting fairly taunt just above the ground. Then they put in a stick to weigh down one corner. When the rain starts, they let the “first wash” of the rain over the plastic sheeting go as waste, and then they put a bucket or local container—a metal ewer with a large lip—under the stick to collect all of the rain water, changing the buckets as the rain pours down. Then they cover their containers and have fresh water to drink whenever they need it! Pretty smart. MSF included rope, buckets with covers and plastic sheeting as part of the non-food items we distributed to victims of the flood for just this purpose—so they could collect water to drink.

Today I went to the island of Padma Pukur. The island is completely surrounded by a levee, which is broken in several areas. To this day, a large part of the island floods during every high tide. People in the area are busy at work to repair the levees, and the situation should hopefully improve in the near future.

In Padma Pukur, MSF cleaned about 30 tube wells that were affected by the storm surge. We “shocked” the wells with a large dose of chlorine, then we let the chlorine sit overnight, and finally we flushed the well by pumping large volumes of water out to get out any residual chlorine. In order to be sure no one used the pump while we were disinfecting it, we did the work at night, when the women do not collect water, and we removed a piece of the pump so they could not use it until we flushed it the next morning. Since we flushed the wells, the people are using the tube wells for drinking water again, so the drinking water situation has improved here. Their rainwater collection ponds are still being flooded every high tide, however. They just have to finish repairing the levees so there isn’t flooding twice a day!

Today was an interesting day, as I explored more of the area affected by Aila. In Dakshin Bedkashi the high tide slowly comes in, and people walking along the brick walkways are up to their knees in water—including me. I rented a small boat to go up the canal and over all of the flooded walkways and shrimp beds. I passed house after house that was destroyed. The ones that are standing are now islands at high tide. MSF has disinfected 30 wells in this area and I checked on the progress. People were literally up to their waist in water to get to one of the wells we disinfected. We stopped and chatted with a family on their way to the well: a father, mother, and two children. At this time, everyone is helping to get water, since the way there is so difficult. The family had lost everything in the storm. I decided it was time this path was replaced, even if the tide was still coming in and flooding it. So, time to go find someone to build a nice bamboo bridge.

The search was on for the town’s carpenter. When we found him, the vigorous negotiations started. I wanted a nice quality bamboo bridge for the community, and I wanted it done by tomorrow. Happy to tell you that after a successful negotiation, the deal is struck. I can’t wait to see the new bridge tomorrow! A simple thing, but it should help a lot.