Alive Again: A Survivor’s Account of Life After Ebola

Twenty-year-old Umaru recovered from Ebola in late February at the Doctors Without Borders/Médecins Sans Frontières (MSF) Prince of Wales Ebola Management Center in Freetown, Sierra Leone. He has come to MSF’s survivor clinic each week since then. He was one of four people in his family to recover from the disease. Here, Umaru discusses his battle with the virus, and the struggle to cope with life after recovery.

My brother fell sick some weeks ago. He was vomiting and one day he vomited on me; I think that’s how I got infected. A few days later my back was aching and I started experiencing headaches, fever, and then vomiting too. Everyone was scared. I could not stay in my home any longer so I decided to come to MSF’s Ebola Management Center. They took my blood and they confirmed I was Ebola-positive. I was transferred to the confirmed ward, and started having sleepless nights and nightmares because I thought that people who have Ebola don’t survive. At that time, there were a lot of rumors that people at the centers got injected with something that made them die. A woman who was there with me lost her daughter who was seven months old. I thought, “What will happen to me?”

But the nurses and doctors gave me courage. They said, “Don’t worry, have hope.” The next day the woman was discharged, and soon after that, after 15 days in the center, I was discharged too. When MSF gave me a certificate to show that I was an Ebola survivor, I was so excited. But I soon realized that coming back to a normal life was far from easy.

First of all, because even after being discharged, I was still experiencing some tiredness [and] vomiting. The doctors at MSF gave me some tablets to stop the diarrhea and vomiting and stomach ache. Today those symptoms have stopped. I consider myself lucky because I haven’t had any skin infections or eye infections like many other survivors. I was 52 kilograms [about 115 pounds] before I had Ebola, and now I’m 60 kilograms [about 132 pounds], so I’m getting stronger—or fatter!

Another thing that worried me was that fact that people might be scared of me, or think that I might transmit the disease to them. I still have some sleepless nights. But most people have accepted me back, they see me as a hero now, because I survived Ebola. My friends visited me in the treatment center and afterwards at home when I was discharged. They are true friends. My landlord was also happy that we survived Ebola. Normally people with Ebola get driven from their homes, so we were lucky. 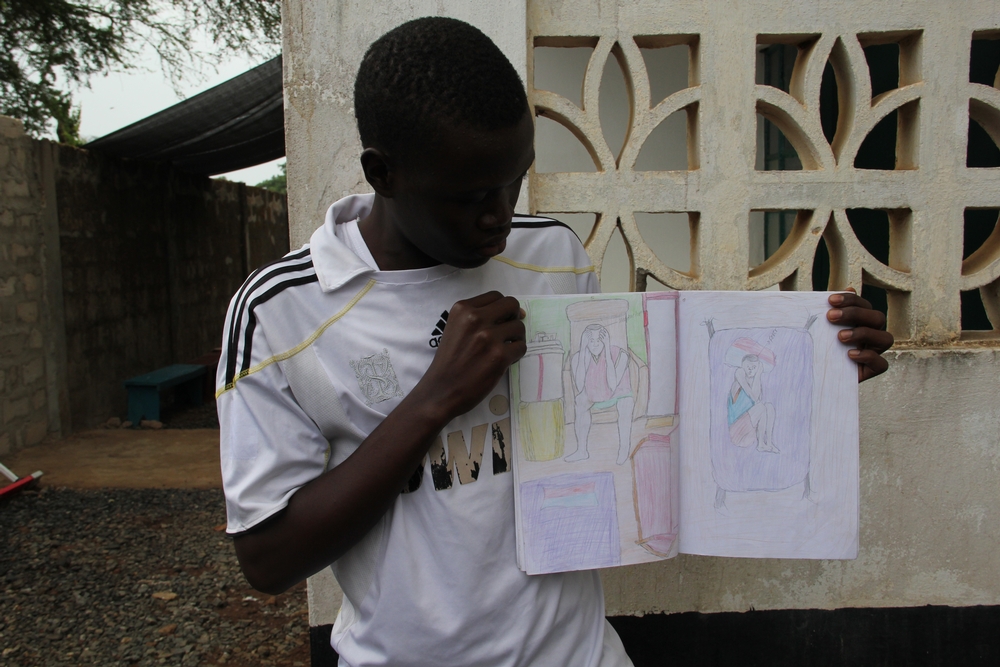 My family has been mostly very excited to see me. They encouraged me to eat because that is the only way that I can be strong. At the same time, my younger brother was stopped from seeing me by his father, even though I had recovered. My elder brother has also abandoned me because he is scared. He never comes to see me, even though we used to do everything together. That led me to not only be worried, but also angry.

Since I left the center, I’ve come to visit MSF every Tuesday. Coming here is much better than staying at home. Sitting at home where there’s nothing much to do sometimes gives me stress. I still need to finish school, but schools are closed because of Ebola. I’m not happy about that. But here at MSF I found a way to help others in the fight against this disease.

After being discharged from the Ebola center, I met Felix, a Swiss cartoonist that was here with MSF. He encouraged me to do some drawings of my Ebola experience. I drew pictures of how I got sick, what happened in the treatment center, and how happy I felt when I was discharged.

“My Life is Torn Apart”: Living in the Aftermath of Ebola

Now that I am a survivor I want to continue working on my drawing, and also my acting career. I’ve already acted in four movies. My director is very happy that I am back, alive again.