Another Day for an MSF Hospital in Syria 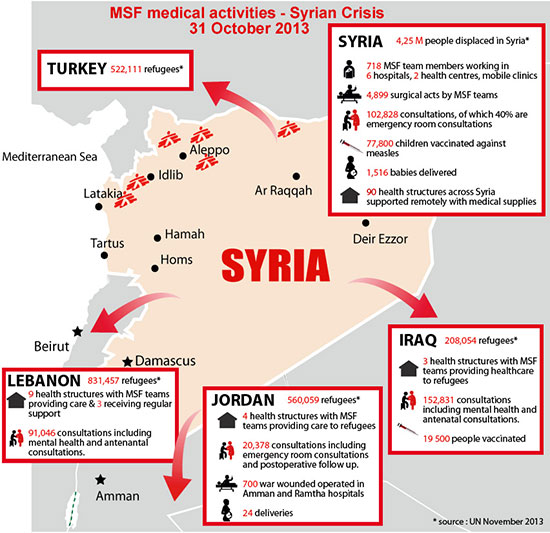 “Yes, I think many injured will be coming now.... perhaps we’d better call the surgeon.”

“Good idea,” I say after some time. It sounds stupid. I cannot think of a better reply.

These were the words spoken by my assistant Ayyub* at 6:15 am on a crisp July morning in northern Syria, as we peered toward the distant hills and listened to the sound of artillery echoing along the valley floor. These were the same words that I would hear often over the next two weeks, as more than 160 casualties—men, women, children—poured into the modest hospital Doctors Without Borders/ Médecins Sans Frontières (MSF) operates in the area. This was the first time Ayyub had uttered this prediction with such assuredness.

Even after years of working in humanitarian emergencies, none of it has prepared me for standing on the roof of an old barn, perched on a hillside in what was ancient Mesopotamia, listening to the thud of nearby artillery, and trying to decipher what I am meant to be doing in response.

Internally I can't even begin to fathom how glad I am to have this soothsayer standing next to me, someone who can practically inhale the morning air and understand what the day will bring. So yep: calling the surgeon—well, to be honest, calling absolutely everyone—does seem to be a good idea in this case. Pretty much the only idea in fact. But it's OK. This is what we are here for. I hope we're ready.

We down the sugary dregs of our tea and hurry below to the radio operator, Zafar, telling him to put the call out: “All hands on deck.” Or in the parlance of MSF: “Mass casualty incoming.”

The first ambulance arrives before we are ready. It's a pick-up truck with two wounded fighters, men from the frontlines pallid, semi-conscious on mattresses in the back. A wave of young men—volunteers from the surrounding villages—surge into the truck and 20 hands float each patient onto a stretcher and inside to the emergency room, before reforming at the hospital gates to wait for the next ambulance to arrive.

The doctor on shift can see quickly one of the wounded men needs immediate abdominal surgery. It's complicated. It's messy. Massive injury to the abdomen: his chances are fair at best.

William, the surgeon, arrives at 6:30 am, barely minutes after the first wounded men. With 20 years experience with MSF and a naturally calm disposition, he's a rock in the middle of the hectic buzz. Accompanied by the anesthetist and the operating theater nurse, he's scrubbed up in less than five minutes and in the theater operating on the man with the hole in his gut.

An hour later, practically everyone we employ has arrived: about 90 local staff—doctors, nurses, midwives, drivers, guards , clerks—and 12 international staff, mostly medical professionals, all working flat out or pitching in somehow, in whatever way they can.

It's shameful, but I realize now as I write that I don't know the outcome of that first patient in surgery that morning, whether he survived or not. I lost track of him and countless others as injured men and women continued to arrive. All day long, the sound of artillery filtered over the beeping of medical equipment as beds, and then the floor space, filled up with the injured and the dying.

The surgical team worked straight through until 3 am the next day, sitting for maybe a total of 30 or 40 minutes the whole time. Eight operations, I think. And this continued for the best part of two weeks. “That was the hardest day of surgery I've ever had,” William told me after that first day, and he meant it. Thankfully, I never had to hear him say that again. Even though he conducted over 40 more surgeries in the following days, never were those days as hard as that first one.

But here's the catch. This isn't the most important work that MSF is doing in Syria.

This is not where the most lives are being saved, or the most suffering is being alleviated, or the most human dignity is being defended and upheld. But it makes for a more interesting narrative. Right?

Instead, I could write about 60-year-old Mohammed Asghar, who walks 2 kilometers every fortnight through the valley to receive his diabetes medication and, while he's at it, to sit for a few hours with other old-timers in the tea shop to catch up on local gossip. Or I could write about expectant mother Selma, and her doting husband, Basam, who spend a worrying month in the maternity ward getting care for pre-eclampsia before Selma gives birth to a healthy baby girl. I could write about that, but I don't really have the skill to depict such human stories with interest or, more importantly, the fidelity or sensitivity they deserve.

But I do want to try to explain that underneath all of this drama—underneath all the bombs and the bloodshed and the headlines—there are people, just people, trying to live their lives and continue from day to day. People who want to tend their land, or attend school. Look after aged parents, or grow up to become a dentist, electrician or writer. Give birth, find love, find happiness. Seek security for the family, or a new place to live now that there is a baby on the way. All the things that people do, all over the planet, every day. But doing this in a country at war. Trying to continue a life as conflict grinds on. And each day the reserves, emotional and material, are worn down until they are spread so thin you don't know what to do anymore.

And this is where MSF, along with several other independent, neutral organizations, are making a difference. A very small difference, but a difference nonetheless. MSF is providing health care for people where the previously functioning health service has, in some cases, all but evaporated. Providing maternity care for pregnant women, mental health services for the bereaved (imagine a war starting in your city, town or village), medication for people suffering from chronic illnesses such as diabetes, or antibiotics for simple infections that if left untreated can become life-threatening.

Providing health care genuinely helps people maintain some control and dignity in their lives. The hospitals are staffed by dedicated Syrians, enabled by the presence of MSF and the equipment and medication and additional medical experts they bring. Those two weeks of mass casualties, in which, yes, many lives were literally saved on a surgical table, were in fact preceded by six months of relative calm in the emergency department. The calm was despite the fact that we were covering perhaps 90 percent of all health needs for a catchment population of approximately 100,000 people. Try asking the midwife on-call if she was bored in that time.

Of course, this is all so obvious. We all know people have very similar wishes, desires and fears all over the world. And we all know that there are people living in great hardship in countries such as Syria. It is easy to let these basic home truths become submerged in the media headlines and soundbites about men with guns fighting each other. And to forget about the actual people that constitute a country or a nation or a community, or a family, or just themselves.

Such a home truth came back to me a month after that short conversation with Ayyub when he suggested calling the surgeon. I was returning from the hospital to the house we rented nearby, ready for bed. Entering the living room, I found eight old men sitting patiently in a semicircle, a few thumbing prayer beads, most just with their hands resting on each knee. A bit of a surprise.

“Wa alaykumu salam,” they reply. “And unto you peace.” The traditional greeting.

These were the village elders. Men I had never met before, never been introduced to. Before the start of the conflict, it would have been unthinkable not to have been introduced immediately on my arrival. But since the fighting had started, customs and traditions had been disrupted. The normal ways of doing things had rather broken down.

“We've come to ask you not to close the hospital,” the eldest man says. An almost unbelievable archetype of a village elder. Twinkly eyes, white beard and an aura of warmth and calm.

“No, no!” I say. “Please don't be concerned. We are not closing. I think there has been some misunderstanding.”

I had heard that this kind of rumour might have been circulating in the community. In the last week, one of our Syrian doctors had unexpextantly taken leave to see his family and we had been forced to reduce the hours of our GP clinic whilst we looked for a solution—a frustrating, though not unusual circumstance in this type of environment.

“So you are not closing the hospital?”

“No, we have only had to reduce hours at the clinic because our doctor has taken leave,” I explain. “But please take my assurances. We are not closing. I apologize for the confusion. Insha-allah”—God willing—“we are here for the long haul.”

“Alhamdulillah,” Praise be to God, they all shout at once, rising to their feet, embracing each other, coming to embrace me. Everyone is chattering, beaming, moving around the room, patting each other on the back. Our exchange is so short, and the release of emotion is so sudden and explosive, that I initially don't really understand what is going on.

Then it becomes clear. These old men, these elders, had come to me to fight for the survival of the hospital. They were primed for hours of discussion and persuasion and debate. Ready to sip tea into the small hours, searching for the compromise, the solution. Imploring me for a benevolent decision.

I feel embarrassed that the village elders have come humbly to ask me, a foreigner, newly arrived in their community, and less than half their age, not to close a hospital. A hospital that is serving everyone, 100,000 people, staffed by Syrians treating fellow Syrians. What sort of a vile and otherworldly situation is that? Why should these men even have to ask, plead or implore to have access to basic health care? And to ask me, or MSF, or anyone else for this right?

My poor communication with the community had caused the misunderstanding and concern. But yes, we would be staying open.

After things had calmed a bit, and after a customary round of tea and small talk, the old men made their excuses to leave. All filed out and I respectfully stood by the door and shook hands. Unusually the leader of the group stayed till last; ordinarily he'd have led the way.

As we shook hands he said: “This hospital is for the poor. It must stay open. We are always forgotten.”

After a pause I say: “I understand.”

It sounds stupid. I cannot think of a better reply.

*All names were changed to protect people’s identities.