Between Towering Ruins and Detention Centers: A Look Inside Libya

View Photo
A detention center in a small town between Misrata and Tripoli held 43 inmates, almost all of them women and almost all with health issues.
Click to hide Text

The fighting continues in Libya, a country fragmented by a multitude of power centers. Since mid-2014, the humanitarian situation there has deteriorated due to the resumption of the civil war and the political instability it brings. Millions of people across Libya are impacted, including refugees, asylum-seekers, and migrants. Dr. Tankred Stoebe spent the month of January 2017 in the country, coordinating a medical assessment with Doctors Without Borders/Médecins Sans Frontières (MSF) that took him from Misrata to Tripoli. Here, he describes what he saw.

Ismaël and Masjdi were 19-year old students when the revolt began in Libya in 2011. Like thousands of others, the two fervent idealists took up arms against the Muammar Gaddafi regime with no training or understanding of military strategy. The two young men, who both narrowly escaped death, met much later in Malta.

During the fighting, Masjdi sustained wounds to the face and was blinded, while Ismaël was paralysed and can only move his right hand. They became friends from the moment they met in the intensive care unit. Separated during their convalescence, they kept in touch and now meet up in Misrata whenever they get the opportunity. “We’re like brothers,” they told me in chorus. Masjdi pushes his friend’s wheelchair and Ismaël reads to his blind friend.

Misrata is steeped in history. Strategically located on the Mediterranean Sea, the city is known as much for its pride and independence as its traders, smugglers, and pirates. Subjected to heavy fighting between February and May 2011, Misrata is a sandy and dusty, but bustling desert city. Economically and militarily powerful, its hospitals are well equipped and its health system better organized than in the east. Compared to Benghazi and Tripoli, Misrata is—for now—relatively safe, so this is where we decided to set up a base.

Every day, we saw sub-Saharan Africans, each with their own agricultural or construction tools, brushes, and drills, stationed at the city’s crossroads, looking for work as day laborers. Few are arrested, but some get caught at police checkpoints and interned in camps before being deported back to their home countries.

There are around 10,000 migrants in Misrata, mostly from Niger, Chad, and Sudan. Fearful of arrest and deportation, when they fall sick they usually go to pharmacies and buy the often high-priced drugs they are advised to take. For more serious problems, they prefer private medical facilities because, although expensive, these are not required to report undocumented patients.

When they have a chronic illness, their only choice is to go home. When I asked them if they didn’t want to get on a boat to Europe, they smiled and shook their heads: “It’s too dangerous,” they said.  “We don’t want to die in the sea.”

Between Misrata and Tripoli

Living conditions and hygiene are truly appalling in the detention center in a small town halfway between Misrata and the Libyan capital, Tripoli. Intended for 400 refugees, there were only 43 detainees, 39 of them women from Egypt, Guinea, Niger, or Nigeria, who’d been there for a month with no contact with the outside world, including their families.

Most of them had come from Nigeria and they told me their homes there had been bombed. The Libyan coastguard had intercepted their inflatable dinghy near the Mediterranean coast and they were sent to the detention center.

Rooms in the center were small, dirty, and jam-packed with mattresses. As we entered the hall, there was a putrid stench. We walked through puddles of urine. There were no showers, the toilets didn’t flush, and the women had to relieve themselves in buckets. They used a little of their drinking water to wash. They were utterly desperate and begged me to help them get back to Nigeria. 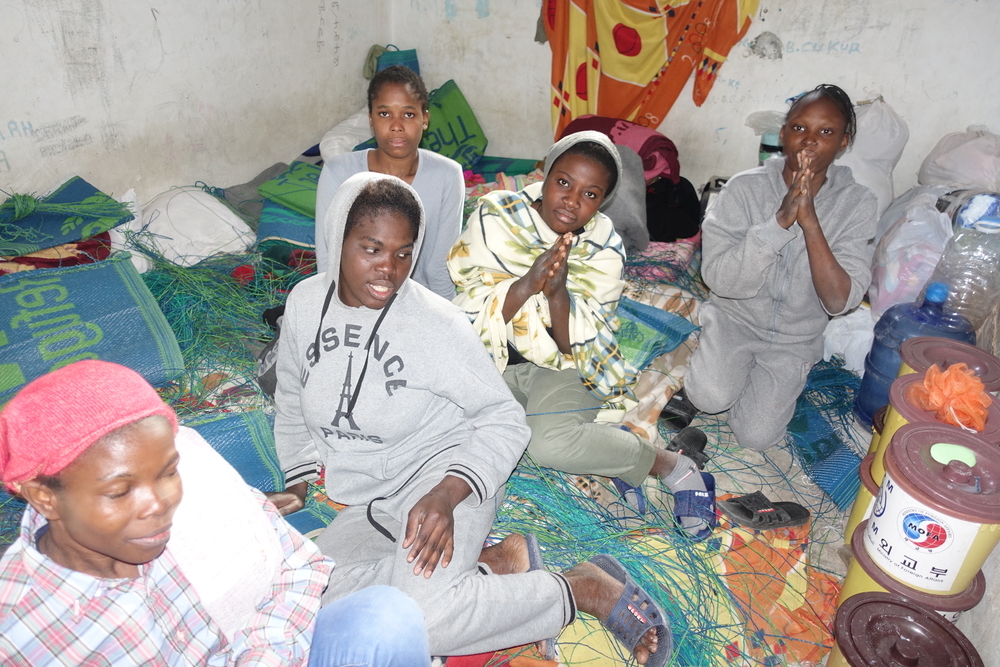 When I told them I was a doctor, they didn’t believe me at first, but then they accepted the treatment we offered them. Their average age was 22 and almost all of them (93 percent) had health issues. Many had scabies (58 percent), for which we gave them prescriptions, and some had various aches and pains (48 percent).

Other non-specific ailments were due to emotional trauma—or at least that’s what we deduced from the stories they told us about their flight, and from their almost palpable fear.

When I asked them if they thought they would try to get to Europe again, they replied, horrified, “Never again!”

Our visit to Sirte was a real eye-opener. Close to the oil fields, the town is known for being the birthplace of Muammar Gaddafi, who died in October 2011. In the spring of 2015, the so-called Islamic State, which controlled around 185 miles (300 kilometers) of the country’s coastline, made Sirte its stronghold in Libya.

It was only in December that militias from Misrata succeeded in retaking the town with help from the U.S. Air Force. The battle lasted seven months. Many fighters died and more than 3,000 people were wounded. Ten ambulances were damaged and three rescue workers were killed.

Armed with a special permit and a police escort, we managed to enter the coastal town. Reduced to rubble, not one building has been left intact. Sirte was subjected to a brutal war that left a trail of total destruction. A deathly silence hangs over the town that, from an historical perspective, was probably most unique.

We went to Ibn Sina hospital in Sirte. Relatively unscathed by the bombs, it had been ransacked. Abandoned over a year ago, the hospital was once a modern, 350-bed facility equipped with several operating theaters, an intensive care unit, an MRI scanner, a cardiac catheterization laboratory, and 20 practically new dialysis machines. It’s completely destroyed, with ripped up, flooded floors, smashed windows, and sagging ceiling tiles*.

When we reached Tripoli, I was stunned by the towering heights of the ruins. MSF colleagues were in the capital, providing assistance to people spread among seven detention centers.

Most of those wanting to cross the Mediterranean to Italy are from sub-Saharan Africa—Nigeria, which is mired in conflict; Eritrea, governed by an authoritarian regime; and Somalia, a country embroiled in a civil war.

People flee north to escape poverty and terror. To reach the Libyan coast, they have to pass through Chad and Niger, both particularly poor countries. According to the International Organization for Migration (IOM), more than 300,000 people crossed through Chad and Niger last year. However, there are no precise figures on how many have died of hunger or thirst, or from falling off a truck along the way.

According to most estimates, at least as many people have died crossing the desert as those who have drowned in the Mediterranean Sea—the statistics on people who drowned are more reliable. Be that as it may, survivors are insistent that the desert is by far the hardest part of the journey.

The number of dead migrants also pose a problem. We went to hospital mortuaries overflowing with unidentified corpses, some that had washed up on beaches. Many have been there for months. As the authorities don’t have the resources for DNA testing, it’s impossible to identify the dead and ship them back home or bury them.

Note: This story is based on personal experience in January 2017. Please note that due to volatile context, the situation changes quickly in Libya. *As of April 21, 2017, the Ibn Sina hospital in Sirte is expected to re-open soon.