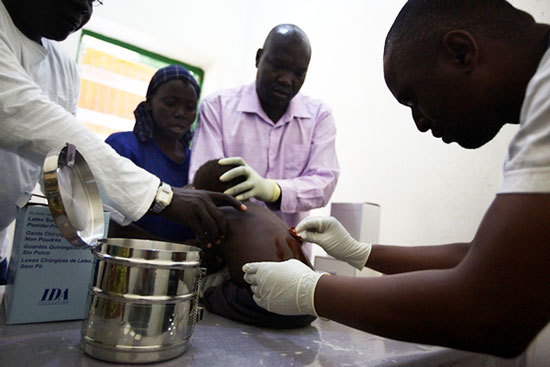 Papy Banza, a medical doctor from the Democratic Republic of Congo (DRC), is part of Doctors Without Borders/Médecins Sans Frontières (MSF)’s Mobile Human African Trypanosomiasis (HAT) Team, which has just completed a nine-month intervention in South Sudan. The international team worked with local doctors, nurses, laboratory staff, logisticians, and community outreach workers in areas of the country with a historically high prevalence of HAT—better known as sleeping sickness. Targeting villages in Central and Western Equatoria states, they carried out active village screenings and treatment, along with training, surveillance, and advocacy.

After five years in my native DRC as a member of MSF’s national staff, working with the Mobile HAT Team has been a great first experience as international staff. When I first met up with the team in the Central African Republic, it was the first time I had left my home country. Before long, however, I was moving on to South Sudan with the team to start up the project there. My first time in an English speaking country, a real challenge!

As the medical doctor in the team, my role is to treat any cases we find during active screening. This is where the laboratory technicians, logisticians, and other people in the team disappear into remote villages to screen the whole population and try to find cases. Sleeping sickness is a neglected parasitic disease, spread by the bite of the tsetse fly, and is fatal if it goes untreated. Unfortunately, in the early stages the symptoms are like those of many other diseases, such as malaria and typhoid, which means it often goes undiagnosed.

We have concentrated all our activities in the dry season, between October and May. In South Sudan, the rainy season just makes it impossible to reach the villages most at risk. In fact, it’s hard enough in the dry season. Carrying out the screening is a real challenge in a place like this and each member of the team has a specific role to play in making sure it runs properly. There is no rapid test for sleeping sickness like we have for malaria, so screening involves setting up a mobile laboratory in a new, remote location each day, including generator-powered microscopes and centrifuges. While the team starts the screening, I don’t have any patients to treat yet, so I end up getting involved in all sorts of other tasks. I have even learnt how to manage the cold chain, which was very exciting for me.

However, it’s when I get a call from the screening team to tell me there’s a positive case that the work really begins. So that the proper treatment can be given, each case has to be staged so we can see how far the disease has advanced. Stage one means the parasite is present in the patient’s bloodstream, but if they are stage two, the parasite has spread to their brain. The only way to judge a patient’s stage is with a painful lumbar puncture. It requires skilled, trained medical staff, which is a real challenge in South Sudan, where decades of conflict have left the country with few qualified health workers.

The previous treatment for sleeping sickness was actually arsenic-based and killed one in 20 patients. Luckily, a new, less toxic treatment known as NECT (Nifurtimox-Eflornithine Combination Therapy), championed by MSF and the Drugs for Neglected Diseases initiative (DNDi), is now available. However, treatment still takes between seven and ten days, requires hospitalization, and can have some complicated side effects.

One particular patient I treated here will stick in my mind forever. It was a woman who didn’t know her age, as is very common here. She had tested positive by the team in the field. When she arrived at the hospital I heard the story from the team about when they went to pick her up from her home. She had a little three-year-old boy, who, when his mother got in the car, started screaming. The team decided to bring the boy with them. At the hospital we performed the lumbar puncture on the mother who turned out to be stage two. We asked her if her son had been tested yet. He hadn’t, so with her permission we did the tests.

Amazingly, the child was also stage two. He was so lucky we tested him. I started treatment for them both, and from beginning to end, there were no side effects. The mother was the last patient we treated in the town of Mundri in Western Equatoria state. When she completed the treatment, we planned to take her back to her village and I went with her. It was a long way. After one hour of driving the driver stopped. He explained it was the end the road; this was as far as we could go by vehicle.

I asked the driver where the woman lived. He said deep in the bush, about three kilometers [nearly two miles] from here. I looked around and saw the area was full of long grass. I worried that the woman was going back to live in an environment where she is at risk of being bitten again by the tsetse fly. Women are often at higher risk because they spend a lot of time at the river washing clothes and in the bush collecting firewood—two areas prone to tsetse flies. I can only hope she is lucky. I looked at the mother and her child, said goodbye and good luck, and watched as they walked into the bush, knowing I would not know what happens to them.

While I’m treating patients, I also work with the local hospital staff as much as possible to prepare them to continue the services after we move to the next location, usually a month or so later. Before, people with suspected sleeping sickness might have had to go to another town far away, or even to Uganda for treatment. But now, with training of the staff, they will be able to access testing and treatment in the local hospitals.

I’m now reaching the end of ten months with the Mobile HAT Team and it has been a real challenge. Two countries, five different homes, more than 60,000 people screened, dozens successfully treated and back home living healthier lives. Now we’re finishing up in South Sudan and I’m looking forward to spending some time with my family before heading out on the next mission!

Over nine months in South Sudan, the Mobile HAT Team traveled more than 9,000 kilometers [nearly 5,600 miles] from village to village, screening more than 60,000 people across 141 different mobile screening sites. Thirty-eight confirmed cases were identified and treated, indicating the good news that the prevalence of HAT in these areas has reduced significantly. In addition to carrying out the active screening, the Mobile HAT Team also worked to improve the diagnostic and treatment capacity of existing services and re-establish passive screening facilities.