"Call for backup—all hands on deck!"

An MSF staff member describes the fast reactions, the teamwork, and the emotional extremes involved in responding to an emergency at Chatuley hospital in Léogâne, Haiti. 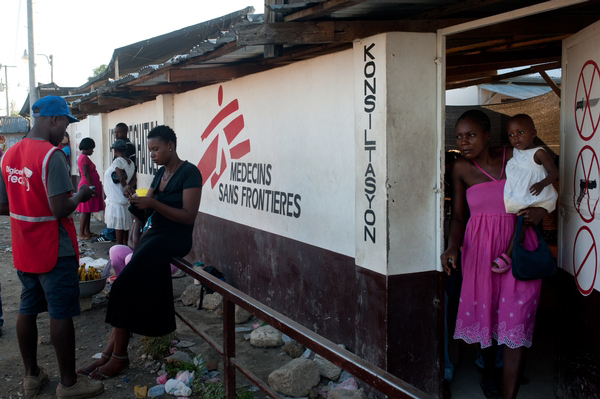 Doctors Without Borders/Médecins Sans Frontières (MSF) project coordinator Ahmed Fadel describes the fast reactions, the teamwork, and the emotional extremes involved in responding to an emergency at Chatuley hospital in Léogâne, Haiti. 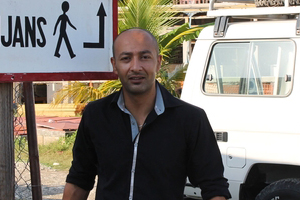 It’s past 10 p.m. at Chatuley hospital. A two-year-old boy is receiving oxygen. He’s in a deep coma following a traumatic head injury. He’s about to leave us. The pediatrician and two nurses look on in despair. Another nurse caresses him tenderly to sooth him during his departure from this world. Then, just like that, he is gone.

There was nothing more we could have done to save him; his fate had already been sealed. The head nurse, with tears in her eyes, scoops him up and takes him to his mother. She is receiving treatment herself. There’s a moment’s silence. Due to the shock, it takes her a moment to come to terms with what has happened. Then she bursts into tears. The staff around her remain respectfully silent.

In that moment it feels like the world has stopped turning. Everything around us stands still, except for the tears rolling down our cheeks.

Let me set the scene. Earlier that day…

It’s a beautiful, sunny Tuesday morning in Léogâne. I’ve got a full schedule ahead of me: lengthy meetings with the teams to discuss our aims and the goals achieved so far; arranging things for the month to come; and debating key strategies for the year ahead. At the end of the day, we take a shortcut back to the base. We pass a family living in a makeshift shelter and a man asks us to stop. I assume he is about to ask for medical assistance and I am relieved to have a doctor with me. In fact, the man wants to show his gratitude and thank us for our work by giving us a small gift, a piece of fruit. We return to base, delighted by this small but touching gesture, and share it with the team. It looks like it is set to be a pleasant evening…or so we think.

At 7:45 p.m. I hear sirens in the distance. Before I get a chance to ask what’s going on, a guard rushes over and informs us the hospital just radioed in with a message. There has been a road accident, resulting in a number of minor injuries. The hospital team should be able to handle it. Just minutes later, at 8 p.m., two surgeons, a nurse and the anaesthetist receive calls; they’re needed in the operating theatre. At 8:25 p.m. I’m told the number of injuries might be larger than we first thought.

I arrive at the hospital at 8:33 p.m. There are trucks and ambulances from the government health service and the Haitian Red Cross queued up outside the emergency room, all filled with injured people. The stretcher-bearers are overwhelmed. More than 30 injured have just arrived and there are more ambulances on the way.

Swiftly, I get to work moving the vehicles on to make room for others, and then head for the emergency room. There are people with injuries everywhere waiting to be seen. The surgeon tells me they need people to help take charge of the injured people who are due to arrive any minute. I grab my phone to dial the number for base, only to find dozens of messages from the team asking if they can help us. I page them: "Emergency/lots of serious injuries/support needed/all hands on deck!" The reply: "Message received, the whole team is on its way."

I head back in and come across a colleague from another organization. She fills me in on what has happened. Two large trucks have collided. They were packed with passengers, crammed in on top of one other—there must be 60 or 70 people involved. It happened near Gressier, on the main road between Port-au-Prince and Léogâne. The road has been closed to allow all the injured people to be evacuated and to move the trucks. This means that MSF’s Chatuley hospital is the only accessible health facility.

At 8:38 p.m. the MSF truck pulls up with our reinforcements: doctors, nurses, midwives and logisticians pile out. The whole team of international staff has arrived, focused and determined. "Fill us in on the situation and tell us what we need to do!" I summarise quickly: "All categories of injuries—30 people—more are on the way. Doctors—the emergency doctor and surgeons are your main concern; follow their instructions. Logisticians—follow me."

I’ve hardly finished speaking when I see new troops arrive: the Haitian health staff. They were taking a break but have dropped everything and come here after hearing the news. They’re waiting for instructions without me even having to call them.

From then on it’s a hive of activity; no stress, no panic, just a positive buzz in the air. Everyone knows their role and their place. There is no shouting, no rushing around, just action. This attitude is calming for the injured and their relatives who have to wait anxiously at a distance. People trust us.

The world stops turning for a moment

At 10:30 p.m. a new wave of injured people arrives and it’s not a pretty sight. We take stock and throw ourselves into it with continued determination and professionalism. Around 11 p.m. we lose the most severe cases, a total of four so far. We can’t let it get to us; we put up our emotional defences and work on.

At 11:15 p.m. the two-year-old boy dies under the caresses of the nurse. Silence. I see the silent tears as the nurse carries him over to his mother so she can hold him one last time. In that moment the world stops turning.

At 11:30 p.m. the emergency doctor announces reassuringly: "The patients are stable and ready to be transferred to the observation rooms and the makeshift tents." Everyone reacts. It doesn’t matter if you’re a stretcher-bearer, surgeon, doctor, even a non-medical staff member; right now we all help to carry the stretchers. The transfer begins.

On the home straight

It’s past midnight, there’s just time for cleaning and tidying before returning to base. In the car the team observes a moment’s silence, we exchange glances and suddenly, as one, we proudly burst into laughter. "Guys," someone calls out, "43 injured, half of them severely and at risk of dying, and we saved them." "YES, we did it!" someone replies.

Relieved, we head to bed, because tomorrow is another day. We’ll have to take care of follow-ups on the injuries and the transfers to other MSF hospitals in Port-au-Prince. We’ll also have to go through the process of identifying the dead with the Justice of the Peace, as well as receiving and supporting the families of the deceased, all without grinding the hospital to a stop. I’ll be briefing the new pediatrician who has just arrived and was thrown straight into reacting to this emergency. I already know what I’m going to say: "Thank you for everything you did yesterday and for everything you are yet to do. You see, that’s what MSF is all about!"

Since 2010, MSF has managed Chatuley hospital in Léogâne, about 18 miles from Haiti’s capital Port-au-Prince. The hospital provides free emergency healthcare 24 hours a day.