Chad: "Prevention is the Important Issue"

In December 2011, MSF nurse Marja Scholten coordinated a vaccination campaign in the African country of Chad to prevent meningitis. 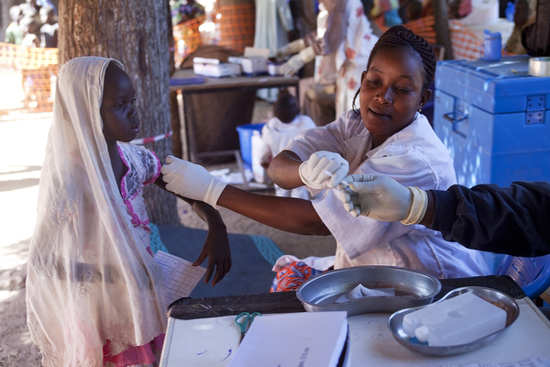 An MSF staff member uses the new MenAfriVac vaccine to vaccinate a young girl against mengingitis A.

In December 2011, Doctors Without Borders/Médecins Sans Frontières (MSF) nurse Marja Scholten coordinated a vaccination campaign in the African country of Chad. Along with a team of 300 people, she ensured that nearly 110,000 people were vaccinated against meningitis.

I was happy to return to Chad, to the Mandelia district, where I had just been a month earlier, helping to prevent a cholera epidemic. This time we would be carrying out a prevention campaign against meningitis A.

Meningitis, which causes inflammation of the membranes surrounding the brain, is responsible for many deaths every year. The disease is particularly prevalent in the so-called “meningitis belt,” an area in sub-Saharan Africa that includes Chad. This year we were working with the new vaccine MenAfriVac, which provides protection for far longer than other vaccines: ten years as opposed to the two or three years offered by other vaccines.

This was the first time we were involved in a preventative campaign—normally we start to vaccinate once a disease has already broken out, but with meningitis A prevention is the important issue. Training was planned involving all the heads of the health centers in the area.

Mandelia is an hour’s drive from the Chadian capital of N’Djamena. It is divided into 18 zones, 16 of which have a health center that provides comprehensive medical care: consultations, births, and vaccinations. The health center is a clinic run by a nurse and several assistants who have basic medical skills. I was really happy to see everyone again, and the feeling was mutual as we had all enjoyed a close working relationship during the previous cholera epidemic.

I have a great deal of admiration for this group of nurses who work really hard and are responsible for addressing all the medical problems in their zones. They were very pleased with the training we had previously given during the cholera epidemic.

The region is far less accessible after the rainy season, and our first concern was how to get the vaccines to hard-to-reach areas. Many areas can only be reached using a pirogue, a sort of flat-bottomed rowing boat. We undertook an assessment with the logistics team; using a wooden pole the pirogier propelled the boat through the shallow water in the beautiful, wild countryside. In Logone Gana, an area on the Logone River, we looked into the possibility of transporting the vaccines by boat across the river to the more remote areas. The local population looked on with great interest as we negotiated a deal for this.

Meanwhile, the medical team was busy preparing training sessions for the fifty or so nurses we needed to carry out the campaign. The preparations were going according to plan, but unfortunately this could not be said of the schedule for the campaign. We were working with the district head, but despite her enormous willingness to cooperate she had to comply with ministerial regulations, and, unfortunately, this led to delays and frustrations.

Luckily everything came together three days before the campaign was due to start. The official start date for the campaign was December 10, but we received an announcement from the president that he was going to officially launch the vaccinations on December 11. There was an official opening with the district head, whose children were the first to be vaccinated, and during the campaign none other than the Minister of Health himself paid a visit to our region. We even made it onto the eight o’clock news.

Once we were up and running, everything went well, and we made daily adjustments in order to reach as many people between the ages of 1 and 30 as possible. Young men and soldiers were a particular challenge, as they believe vaccinations are only for children. We worked for 11 days, and each day began with a fantastic sunrise at 6 a.m. and ended at 10 p.m. when our generator stopped for the night and the lights went out.

During our time off, we visited as many places as possible, including markets, schools, churches, and mosques. Toward the end of the campaign the teams even went from door to door to make sure everyone had been vaccinated. The atmosphere was great and we were all highly motivated.

Approximately 300 people were involved in the campaign, including nurses, registrars, logistics staff, and many others. In 11 days we vaccinated a total of 108,511 people, reaching 91 percent of those eligible. The remaining 9 percent were most likely vaccinated in Cameroon, and in a neighboring district where a similar vaccination campaign was carried out. We did not observe any side-effects from the vaccine, and after our journey was over, we were able to look back on a very successful campaign!