Cholera in Haiti: "All of the hospitals in Port-au-Prince are overflowing with patients"

The Head of Mission for MSF in Haiti gives a first-person account of the situation on the ground for MSF teams responding to the spread of the outbreak in Port-au-Prince. 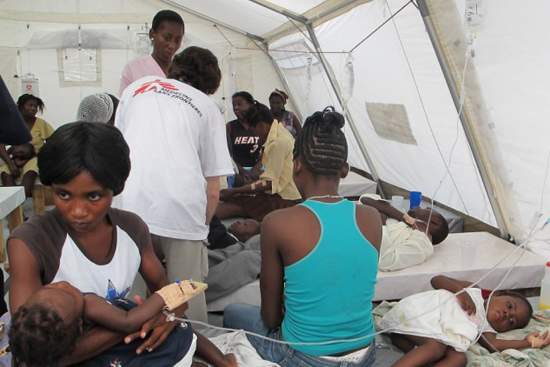 Since a cholera epidemic was first confirmed in October in Haiti’s Artibonite region, Médecins Sans Frontières teams have treated more than 10,000 suspected cases nationwide. In addition to MSF’s 3,000 staff members in Haiti, more than 100 international staff and more than 400 national staff are working on cholera intervention activities. MSF is supporting two Haitian Ministry of Health hospitals in the Artibonite Region, where the cholera outbreak originated.

To bolster health clinics in some of the more outlying areas in the north and center of the country—in places such as Gros Morne—MSF is supplying IV solution, oral rehydration salts, IV sets, and hygiene materials. Supplies have also been provided to the hospital in the town of Port de Paix in the country’s far north and another MSF team is working as far north as Cap Haitien to treat suspected cases there. MSF is supporting cholera treatment centers in Gonaives and Gros Morne. A 20-bed cholera treatment center has also been set up in Leogane, where MSF already runs a hospital.

The epidemic has taken grip in Port-au-Prince, and while MSF teams are scaling up capacity to 1,000-beds in locations throughout the city, the numbers of cases is already overwhelming MSF and public medical facilities.

Stefano Zannini is the Head of Mission for MSF in Haiti. Here he gives a first-person account of the situation on the ground for MSF teams responding to the spread of the outbreak in Port-au-Prince.

It’s a really worrying situation for us at the moment. All of the hospitals in Port-au-Prince are overflowing with patients and we’re seeing seven times the total amount of cases we had three days ago.

In the slum of Cite Soleil, located in the north of the city, yesterday we recorded 216 separate cases of cholera arriving at the hospital, while the total number recorded just 5 days ago was 30. Patients are coming from everywhere, throughout the city, slums and wealthier areas. At the moment we have 400 beds set aside for the stabilization and rehabilitation of patients and we’re hoping to get that up to 1,000 by the end of the week.

But we are really worried about space. If the number of cases continues to increase at the same rate, then we’re going to have to adopt some drastic measures to be able to treat people. We’re going to have to use public spaces and even streets. I can easily see this situation deteriorating to the point where patients are lying in the street, waiting for treatment. At the moment, we just don’t have that many options.

We’re looking for alternative spaces, but you have to remember what the situation in Port-au-Prince is like. Since the earthquake, every available space that wasn’t damaged has been filled by camps where people are living in extremely precarious conditions. Just to find an empty area in this city is a major logistical challenge, so for us to find room to treat people is very complicated.

At the moment we have more than 100 international staff and more than 400 Haitian staff working in the cholera treatment centers throughout the country, but it’s just not enough. More medical staff are arriving, but there’s a chronic lack of personnel here in Haiti and we are close to being overwhelmed. Our teams are working 24 hours a day and tiredness is becoming an issue. Our teams are already stretched and are very stressed from the workload. Working inside a cholera treatment centre with the smell, the noise and the pressure of so many patients is not easy. But we will keep on providing treatment.

As the MSF head of mission, I am extremely proud of the passion and commitment my teams are currently showing in Port-au-Prince and in Haiti. But we’re at critical point. There is no cholera in living memory in Haiti and thus little knowledge of the disease. This means there are a lot of misconceptions and rumors flying around which has caused panic in the population. Some people are staying away from the cholera treatment centers or are afraid to have them in their neighborhoods because they think they help spread the disease. We’ve been trying to explain that the opposite is true: the closer a centre is to a population, the better.

We’re trying to explain that cholera can kill, but at the same time, it’s a disease that you can treat quite easily. It’s extremely important that the patient arrives as soon as possible to the medical facility in order to be treated.

Cholera treatment centers, where patients can be isolated, are critical for effective treatment. The access points are controlled so that whoever enters or leaves is sprayed with chlorine to disinfect properly and prevent further spread of infection. Depending on the number of beds, each treatment center can take up from 50 meters to one hectare of space. Each patient is given a bed and usually does not stay for longer than two days.

But another problem is that when people have finished their treatment and they leave the centers, they go back to what is potentially a cholera infected area. Here in Port-au-Prince, 1.4 million people are still living in camps and within the camps, hygiene, sanitation and clean water are scarce. These 1.4 million people depend entirely on humanitarian aid groups for clean water. Infrastructure is weak and it’s very difficult to get medical aid and water to all of these people.

Two weeks ago I was in Petite Riviere in the Artibonite region where the cholera outbreak originated, and I visited our hospital and cholera treatment centre in Cite Soleil this morning. People are brought to our facilities, many crying and some screaming. Panic has spread throughout the city because cholera is completely new to these people. One of the saddest moments that sticks in my mind is a 10- or 12-year-old child who I saw bringing her mother to our cholera treatment centre and sitting with her, waiting for her to be treated. Usually, it’s mothers and fathers who bring their children to hospital, but here it is the kids who help their parents to the treatment centers.