The Day My Village Was Bombed 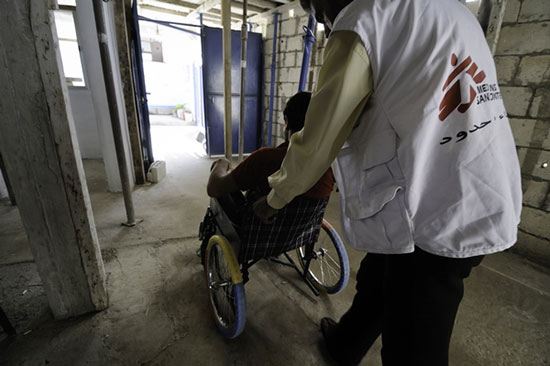 An MSF staff member brings a patient to the entrance of a makeshift hospital that MSF has converted from a farm.

Alia Mosa lies on a bed in a hospital in northern Syria. Her feet are wrapped in bandages. She is angry, despairing, and desperate to tell her story. “It was 5:00 AM,” she says. “They launched missiles and my house was totally destroyed. Four of my children were killed and I was injured. One of my daughters and my husband survived.”

Alia swears she will never go back to Aleppo, the city in northern Syria where she lived until days ago. She wants the world to know about the airstrikes that tore apart her family, but does not want to be photographed and is fearful of her identify being revealed.

Stories like this are all too common in the hospital run by Médecins Sans Frontières/Doctors Without Borders (MSF) in an opposition-held area of Aleppo province. In the wards, wounded civilians may lie next to fighters, mirroring the situation beyond the hospital’s walls, where people from all walks of life have been made victims of the war.

Across the ward from Alia, an elderly woman is recovering from surgery after being shot in the stomach as she crossed a road. “I was in Aleppo city,” says Nora Aljassem. “There were clashes. I was in the street and I was shot.”

The health system in northern Syria has collapsed since the war began, and getting medical care is increasingly difficult. Pregnant women who would previously have delivered in hospital are now giving birth at home, often to babies born prematurely due to the stress of living through war. People with chronic diseases such as diabetes and hypertension are finding it almost impossible to get the medicines or care they need. These are the silent victims of the Syrian conflict.

“Here the Situation is Very Bad”

The word tayara ("plane" in Arabic) is on everyone’s lips in a region where airstrikes and clashes dominate daily life. Some 4.25 million Syrians have been displaced within their country since the war started more than two years ago.

In Aleppo province, alongside the Turkish border, 10,000 Syrians are living in a camp while they wait for an opportunity to cross the border into Turkey. In one of the tents, a group of Syrians sit over a meal of lentil soup and scrambled eggs and talk about the future.

“Maybe we can go to Turkey and get some rest,” says Mustafa, dipping a green pepper in salt. “It will be better than here, no doubt. Here the situation is very bad.” He turns to his neighbor and asks, “What do you think, madam?”

“May God’s will be done,” the woman replies.

“But don’t you think Turkey will be better than this?” asks Mustafa.

“Of course it will be better.”

Next to them, Muhammad keeps silent and smokes. He came to the camp after fleeing the city of Aleppo after an airstrike destroyed his children’s school and his neighbor’s home. “When I came out, there was a lot of dust and I couldn’t see anything,” says Muhammad. “I went to look for my children. When the cloud of dust was gone, we found them and took them out of there.” He adds, with passion, “They are targeting civilians. They are attacking schools, bakery lines, and mosques.”

Muhammad is not his real name. While he does not mind being photographed, he prefers not to reveal his name. His anxieties did not start with the civil war, but 20 years ago. He has been living in fear, he says, since 1993. “I was talking to some friends—it was a political discussion,” says Muhammad. “My comments were reported and I was put in prison for 11 years.” He was finally freed in 2004. “Eleven years,” Muhammad repeats. “Eleven years without seeing my family because the government would not allow me to. Eleven years just for a couple of words.”