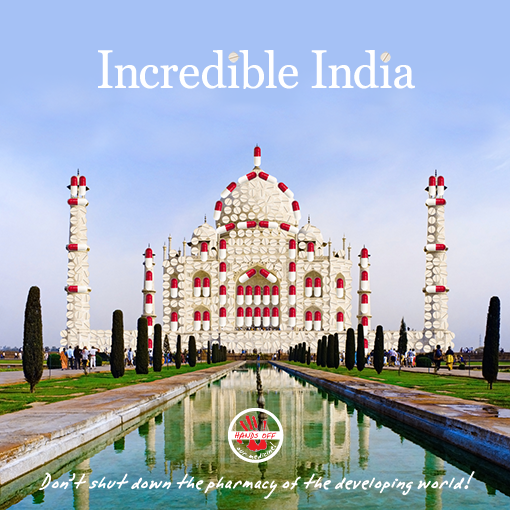 On the day of President Obama and India Prime Minister Narendra Modi meeting in New York, Doctors Without Borders will use two billboard trucks to send a message to Modi outside New York’s Waldorf Astoria Hotel not to cave to US pressure to roll back Indian patent rules that allow affordable medicines to be produced for millions of people around the world.  Using the tagline of the iconic Indian tourism ad campaign “Incredible India,” the billboard shows a giant image of India’s Taj Majal landmark, made out of pills, to represent India’s role as ‘pharmacy of the developing world.’ More than 90 percent of HIV medicines used in developing countries are generic medicines from India and Doctors Without Borders relies on these medicines to do medical humanitarian work in more than 70 countries.

India is often called the ‘pharmacy of the developing world’ because it produces affordable generic medicines used to treat many illnesses like HIV, tuberculosis, malaria and other diseases across the developing world. Affordable medicines from India have helped make it possible to scale up treatment of HIV/AIDS to 15 million people in developing countries today. The price of HIV medicines was over $10,000 per person in 2000, but thanks to competition among generic producers in India, the price is now $100 per year. But India’s role as producer of affordable medicines is under threat because the country is under increasing pressure to change its patent laws that put people’s lives over big pharma profits. Doctors Without Borders is urging Prime Minister Modi to stand strong and protect the world’s supply of affordable medicines.