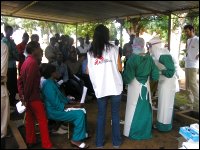 Dr. Vincent Brown is the director of Epicentre, an organization that works closely with Doctors Without Borders/Médecins Sans Frontières (MSF) to conduct epidemiological surveillance and research. An expert in the investigation of epidemics, Dr. Brown discusses the Marburg outbreak, one week after he arrived in Uige, Angola, where he works with the MSF team. He is in charge of implementing the epidemiological surveillance with MSF.

Is this the first time you have confronted a Marburg Hemorrhagic Fever outbreak?

Yes, but the general approach can be similar to other outbreaks of dangerous pathogens. We have to organize data collection in order to obtain necessary information and understand the dynamic of the outbreak. In this case, the investigation work started in the city of Uige (the epicenter of the outbreak), and when needed, focuses on new cases in the region. Contacts with persons that were infected need to be traced. Teams have been organized to deal with this task. My feeling is that the epidemic is currently in a growing phase. It would be difficult to have a good understanding of the situation only through the cases that are reported in the hospital of Uige. Some people are really afraid to go there, because of the number of deaths that were reported. So far, due to the severity of the disease, figures obtained mainly concerned deceased persons.

What did you learn from this outbreak after studying it this past week?

Once you are confronted with it in the field, the disease is even more difficult to control than one can imagine before coming here. The population is already hit by a disease they do not know. Many have no idea how to prevent it. They do not know that it can be transmitted through fluids and secretions of an infected patient. They do not know that any burial without proper precaution measures is a high-risk operation. This means that when a family member gets sick or dies, many may become infected through direct contact.

Is it possible that the epidemic has already spread with other clusters through out the province of Uige?

There have been confirmed cases outside of Uige town, but so far it seems that most could be directly linked to Uige town. World Health Organization (WHO) teams are currently following up these cases. The only data we had to start with were the medical records of some patients who have died in the provincial hospital of Uige. Such records were difficult to analyze retrospectively to define the presence or not of Marburg infected patients. However, many deaths recorded presented hemorrhagic signs.

Practically, how did you organize the data collection?

For the time being, the situation is too critical to work on the past cases. We decided to first focus on new arrivals in the isolation unit that MSF has set up in the hospital of Uige. Every day we recorded the new cases admitted and the fatal cases. Each patient was admitted following a carefully established case definition. According to the symptoms, MSF attending staff defined a patient as suspect, probable, or confirmed.

How did you establish this definition?

It was established so that all the possible cases of Marburg were included. Before being a confirmed case, a suspect patient is in observation to avoid unnecessary contamination. A lab examination was done by hemorrhagic disease specialists from WHO.

This outbreak seems to be much more lethal than past cases of Marburg.

It is very surprising. We will have to answer this question. It is possible that it has appeared very lethal because we have only had records of cases in a terminal stage and mainly among young children who are more vulnerable. Now that MSF team has reorganized the Uige isolation unit, it will allow the treatment of infected people in an early stage. The percentage of fatality could then hopefully decrease, although the case definition does influence the results.

Can we expect an increase in the number of new cases because MSF has an isolation unit in Uige?

Yes, it is likely. But we will have to wait 8 to 10 days before we can see a real effect. The isolation unit opened on April 1 and the population still has to gain confidence in the "caring" capacity of the hospital. People are still very scared to go there. The staff is scared as well. To date, 13 out of a staff of less than 100 have died. The medical staff is being trained by MSF and, for the first time, some patients have been managed properly. Patients must be isolated to prevent relatives and neighbors from becoming infected, but this is not always accepted by the family. This resistance or misunderstanding can be the source of great tensions while we carry out our work. This gets to the importance of informing the community about the ways the disease is transmitted. For instance, not touching the body of a deceased is very important. At the time of this interview, more cases are expected, because of the potential contamination of contacts. We estimate that, with the current number of infected cases (nearly 150), a few hundred persons could have had several contacts. So far, strategies are set up to find those people who had a contact.

Well, all previous outbreaks have finished by subsiding after a few weeks or a month. It is strongly hoped that the protection measures will be respected. We also hope the number of contacts who develop the disease is low.