All these people had fled their villages in a hurry, and it was difficult for them to get health care because they couldn’t pay for it. That’s why it was so important for us to provide free medical consultations in both locations. 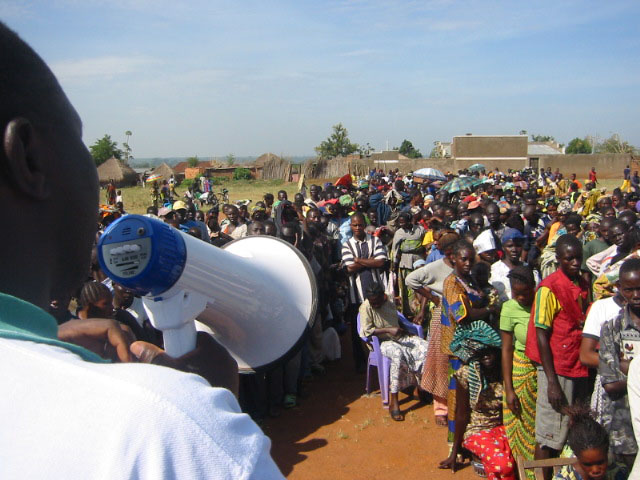 Thousands of displaced people have been streaming into the Ariwara area of Ituri Province in northeastern Democratic Republic of the Congo (DRC) for several weeks. They’ve been fleeing neighboring Haut-Uélé district, where the Lord’s Resistance Army (LRA) has continued its attacks.

I arrived in Ariwara at the end of February. There were already nearly 12,000 displaced people in this town close to the Ugandan border, and 6,000 had headed to Ingokolo, about 40 km (25 miles) to the north. All these people had fled their villages in a hurry, and it was difficult for them to get health care because they couldn’t pay for it. That’s why it was so important for us to provide free medical consultations in both locations.

Our interaction with this population was good because they were so relieved to receive help. As we distributed priority items such as jerry cans for water, mosquito netting, and cooking materials, we listened to people tell us what had happened to them. For some, the LRA attacks had a lasting effect. One of them told me, “They arrived suddenly in the villages at dawn, grabbing food and taking away our young children. Few of (the children) have returned.”

There were so many stories circulating among the displaced about the violence, including the execution of parents who were trying to protect their children. There were plenty of eyewitnesses to the capture of children, making sexual slaves of young girls, and the rebels’ claiming of virgins.

In no time, our two mobile clinics became quite busy with up to 500 weekly consultations. The total lack of hygienic conditions often caused skin infections, including scabies. People also sought treatment for respiratory illnesses and malaria.

While we hear fewer reports of LRA attacks, the situation is actually getting worse. Insecurity is still a major concern in isolated and unprotected communities. For example, during food distributions we saw the population of Ingokolo double from 6,000 to 12,000 people. What’s clear is that people are so afraid that they dare not return home. The nutrition gap worries us as we near harvest time. If no one brings in the crops, people will rely totally on food aid. Unfortunately, during the two months I was on the ground the food distributions were minimal in Ariwara and Ingokolo. Most of the people who had fled without their identity documents were not allowed to register, and were being passed over for food distributions. The situation is especially grave for them, as they’re so vulnerable.