DRC: Unacceptable Sexual Attacks Against Civilians In The East

MSF Operations Manager Katrien Coppens discusses the organization's response to yet another incident of mass rape in eastern DRC. 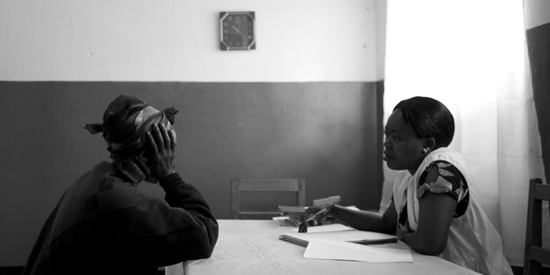 An MSF nurse counsels a victim of sexual violence in Masisi Hospital, North Kivu Province, where hundreds of women who underwent similar ordeals were treated in 2010.

As medical teams in the Democratic Republic of Congo's South Kivu respond to yet another incident of mass rape, Doctors Without Borders/ Médecins Sans Frontières (MSF) Operations Manager Katrien Coppens explains how ordinary people in the conflict-ridden region are being targeted.

An MSF team has treated more than a hundred women in the Fizi region of South Kivu after a recent mass rape.

Yes, we sent a team of medical staff with supplies to the area immediately upon hearing reports about a mass rape a week earlier. Unfortunately, it was already was too late for the team to administer post-exposure prophylaxis (PEP) – a standard part of MSF’s medical response to rape. This can help protect against HIV transmission but must be started no longer than 72 hours after exposure. Emergency contraception was also no longer possible as this needs to be administered within five days. But we could treat victims for sexually transmitted infections and physical trauma.

The morning we arrived, a large group of villagers gathered in the village of Abala awaiting medical care. All the women in that group told us they had been raped between June 9 and June 12. The next day we went to the neighboring village of Nakiele, where inhabitants told a similar story. Our team ended up staying here for two days instead of the one day they had planned to spend there, so they could treat the high numbers of women that were presenting at the health center. The team then moved on to the village of Kanguli and treated more women including two with severe complications as a result of the rape.

What are the medical consequences of this type of violence?

In addition to the physical trauma suffered, the medical consequences of sexual violence are many, including increased risk of transmission of HIV/AIDS, unwanted pregnancy, sexually transmitted infections and serious complications in reproductive health. Women who are pregnant at the time of the attack risk losing the fetus.

Fear, nightmares and psychosomatic body pain are just some of the psychosocial problems experienced by victims of sexual violence. For women, the stigma of rape often means rejection by their families, and even the community as a whole. Victims of sexual violence feeling isolated and ashamed can suffer from socio-economic hardship as a result.

Why are mass rape attacks happening so frequently in the Democratic Republic of Congo?

It is an extremely complex and difficult situation. There is ongoing conflict in the east of DRC. For years civilians here have suffered displacement, looting, insecurity and violence as a result of the fighting and the activities of various armed actors who are roaming the area, living off the local population, and spreading fear and terror.

Since the beginning of this year, MSF has treated around 500 victims of mass rape attacks in the Fizi region of South Kivu alone. It is so frustrating to witness civilians who have nothing to do with the conflict suffering in this way. MSF’s role is to provide the best medical care we can to rape survivors. This is in addition to our usual medical activities in Baraka town and surroundings where in 2011 alone we have treated over 50,000 patients in our health centers and over 3,000 patients in the MSF supported hospital.