Ethiopia's Somali Region: "The moment I saved a child?s life for the first time will always stay with me"

MSF midwife Mali Ebrahami described her experience working in Wardher, where health care and other basic services are minimal. 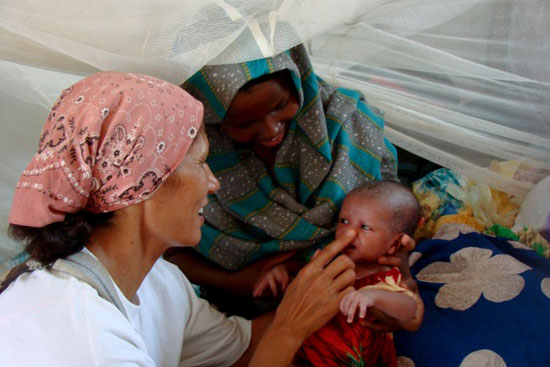 MSF midwife Mali Ebrahami checks on mother and child patients at the health center in Wardher.

Ongoing clashes between government and rebel forces, which began in the early 1990s, has left the people of Wardher, in the Somali region of Ethiopia, caught in the middle. Doctors Without Borders/Médecins Sans Frontières (MSF) supports an Ethiopian Bureau of Health (BoH) center in Wardher town, delivering primary health care to the people in the area. The center’s antenatal unit, where MSF midwife Mali Ebrahami worked, is teeming with women receiving care for safe pregnancies and deliveries. Here, she describes the situation.

Life in the Somali region is difficult, made more so by the sporadic violence. Many people lack the most basic things, like water and food, healthcare, and education. In Wardher Zone, health services are minimal, with few health posts and even fewer staff and drugs. That is why MSF works here in collaboration with the bureau of health.

As a midwife it was my job to identify the problems related to women’s health. One of the main issues I came across was a limited understanding of what a woman’s body goes through and requires during pregnancy. Women in the Somali region marry at a relatively very young age and often bear numerous children in a short space of time. They have a poor diet, consisting mostly of staple foods like pasta and bread, and often carry out difficult physical tasks such as collecting firewood late into their pregnancy. 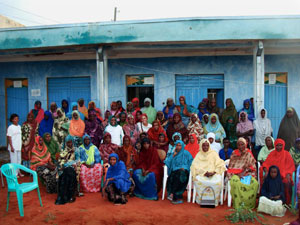 Ebrahami worked with this community outreach team to let women in the area know about the health services offered by MSF and the bureau of health.

I was concerned by the small number of people accessing medical assistance. My main objective quickly became to increase general awareness about public health and to let people know about the services that MSF and the bureau of health offer. I set out into the community to talk to people about their needs. That was the key to success: being among the people of Wardher and including them in discussions about their own health care.

With the strong support of the hospital staff and community members, we have achieved a lot. The community grew to know what services we provide and to trust our assistance. People now come to us to seek medical help: pregnant women when they are bleeding or suffering from an obstructed labor; people bitten by snakes or attacked by lions, as happened recently; and other people with all kinds of general health needs. The numbers of people coming to the hospital are increasing by the day.

The moment I saved a child’s life for the first time in Wardher will always stay with me. It was just two weeks after my arrival and I was in a meeting with the hospital staff. One of our community health workers ran into the room and said we needed an ambulance. When the woman arrived in mid-labor it was obvious that it was a breach birth, and that the baby was stuck inside of her. Most concerning, I could not feel a pulse.

I finally pulled out the lifeless child. Unlike in the modern maternity rooms I was used to at home in Norway, there was only a little adrenaline and a small manual mouth-to-mouth tube at hand. Thankfully these worked. Nine months later I visited the baby boy to say my goodbyes. He seems in good health and is taking milk from his mother.

It is not always easy to respond. We had one woman who arrived barely alive, having bled heavily after giving birth. She desperately needed a blood transfusion, but there are no blood banks here. Instead staff had to find a family member willing to donate. Then the blood had to be tested for its group and screened. The whole process took a few hours. Thankfully in this case we were successful and within two days the patient was up and walking. A week later we discharged a very happy mother and child.

The best thing about working in the Somali region is the people. As part of my job, I worked closely with the health center’s staff, sharing knowledge and expertise. The trainings I gave were largely around complicated cases, such as how to care for women who are unconscious or bleeding during and after giving birth. Before I left, I stood back and observed my team successfully responding to a complicated case. I knew in that moment that I had achieved what I had come to Ethiopia to do.

I am sure that our Ethiopian staff will do a good job providing medical care for the women of the Somali region in the future. I only wish that this health care could be extended to the many others in the region who do not have access to such care. Many women’s health needs remain unmet and there are very few organizations providing assistance.

In Ethiopia, MSF also runs a kala azar treatment program, also providing treatment for HIV, tuberculosis, and malnutrition, in Abdurafi, northwest Amhara region; a primary health care project in Wantaho Woreda in Gambella region; and supports the national outpatient therapeutic nutritional program roll-out strategy in Anchar Worreda in the West Hararghe zone of Oromiya region. In addition, the organization is ready to respond to emergencies as and when necessary.