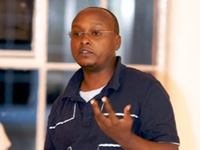 Continuous and sometimes heavy rains in Khyber Pakhtunkwa and Baluchistan provinces have significantly impeded the delivery of humanitarian aid. James Kambaki, Doctors Without Borders/Médecins Sans Frontières (MSF)project coordinator in Baluchistan Province, described what this means for MSF teams trying to reach people affected by the floods.

“We’d heard that there were a group of people around Khabula who were stuck and isolated, but we weren’t sure of exactly where they were. It took us more than two days to find them, driving around in 4x4 trucks, because the flooding has made it so difficult to get around. I was shocked when we found them—I had been in this area three or four days before and the area was completely dry. People had been farming, keeping their livestock, living their normal lives, and then, all of a sudden, here it was completely flooded. Usually there is rain and then flooding. Here there was a flood under a scorching sun.

"He told us there were 3,000 families stranded on the other side of the canal who had no idea that the flood was coming and had been caught completely unaware by the rising water."

“We drove as far as we could before we came to a large canal and across it we could see thousands of people stranded on a small bit of road that was completely cut off by the water. People were obviously desperate and gesturing to us for help, but there was no way we could get across. One man was obviously so desperate that he jumped into the water and swam all the way across the flooded canal to get to us. He came out, his clothes dripping wet and told us, ‘We have been stuck here for seven days and have not eaten.’

"He told us there were 3,000 families stranded on the other side of the canal who had no idea that the flood was coming and had been caught completely unaware by the rising water. For most of them their homes had been submerged and all they had were the clothes they were in and what few items they had managed to rescue. They had lost most of their food stock and most of their possessions.

“There were a lot of children around happily playing in the mud. To them it was fun and a change from their normal life, but for their parents it was complete devastation.

“One old man dragged me away and pointed out across the water.  ‘My house is here,’ he said. But I couldn’t see anything—all there was water. His house was completely submerged. Most of these people were farmers who work for landlords so they have nowhere else to go. This is the only place they have and these mud dwellings are the only homes they have. This old man and his family had lost nearly everything.

“We distributed 250 hygiene kits to the people on our side of the canal and to those who had managed to swim across, along with cooking utensils and plastic sheeting, so that they can build some makeshift dwellings to protect themselves from the sun. Heatstroke has become a real risk, as they have no protection.

“A bigger problem is clean drinking water. The people usually get most of their water from the canal, but now it is completely contaminated. But I couldn’t discourage them from drinking it because they had no alternative. We are expecting that there is going to be an increase in diarrhea, respiratory-tract infections, along with nutrition problems, and in the next few days we will be running a mobile clinic for those affected.

“We’re going to do everything we can to find a way to get across to these stranded people. We organized a boat, but that will not arrive until next week and these people just can’t wait that long. We’re hoping that we can find a back route to get to them. We will find a way.”